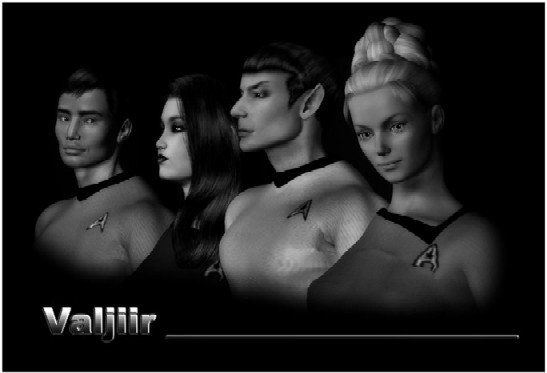 ALL stories have been rewritten to some extent. The greater rewrites will be labeled as such.

Stories designated as "Valjiir Universe" do not always involve the usual Valjiir characters.

Stories in the "Alternates" section are just that - alternates to the Valjiir 'reality.'

Stories in the "Unrelated Stories" section are - duh! - unrelated to Valjiir, but are included because
a) they still have to do with the Star Trek Universe and
b) they were written by contributors to this website.

All stories are intended for an adult audience. All are PG-rated at least, most are R-rated if only for language.
Those with explicit sex are labeled as such [and I suppose that depends on your definition of 'explicit'].
Those containing same-sex and/or violent content are labeled.

If the Story Name is underlined, it is available to read (it will also have a short description)! Just click on the name!

There are many Valjiir stories that never saw print. This is an evoloving multiverse, people!
These stories are designated with an asterick (*) before the story name.

Valjiir has always incorporated a lot of music in its stories and in 'filks.'
Now you can hear the original songs referenced in Valjiir (if you're so inclined).
Just click on the various links contained within the Stories.

If you see "NEW!" in front a story, that means it's been recently added.
This sign will say up for about a month after adding a story.

Film At 11 - Captain Kirk has been rescued, and the media knows it! Will the Enterprise survive the Commodore Calvin Media Event? Oh - and Jilla discovers a wonderful truth about her relationship with Sulu.
Through All This Madness - Jade's first log entry regarding her progress with her patient: James Kirk.
Commentaries - Daffy's letters home to David Maxwell; babies, werewolves and THE TEST! NOTE: expanded from the original.
NEW!*Blue Christmas (A Vignette) - Jeremy and Del spend Christmas as Starfleet Headquarters - with an unexpected guest.
* Through All This Madness - Entry 36 (A Vignette) - Another of Jade's log entries, introducing a new techie: Robyn Thomas.
The Assasination of Eddie (Valjiir Universe) - The High Stakes runs across a strangely stagnant culture - and a life-form inside a comet; and Tharas makes a starling confession to Eontril.
Snake Pit - An entry from Jade's private log concerning Jim's progress - and her own.
The Percentage - McCoy did leave his communicator in Bela Oxmyx' office and, as foretold, the Iotians have come for a piece of the Enterprise's action.
* Ancient Queen - Ah, leave on Lorelei! What paradise, what bliss, what decadence... unless you happen to be the ex-lover of the being the Seeders just happened to install as its new Goddess.
An Old-Fashioned Man - the Enterprise is taking historians to the Guardian of Forever to do historical research. Valjiir is perfecting a version of their cloak with the ability to hide a planet - namely the Guardian - as a precaution against the Klingons discovering how to change the past. And one of the historians is an old friend of the Captain's; a most unusual Vulcan.
The Perfect Woman - A terrible accident has occured in Engineering. Jilla and Ruth are caught in an explosion. Two bodies lie comatose in Sickbay and - who's that girl?
The Sum of the Parts (Vignette) - Jeremy Paget receives a letter from his best friend.
The Last Time I Saw Richard - Jade's therapy with Jim is progressing - but is it fast enough for Starfleet? And will Jade's haunted past destroy her before she's finished?
Voices In The Night (Vignette) - Jim faces uncomfortable truths and regains his sanity
* Welcome Back, My Friends - Jim's triumphant return to the Enterprise! Spock has planned several surprises for his Senior Officers, but as the old saw says, the most important element of any joke is....
* I Guess That's Why They Call It The Blues - Changes abound: The Enterprise may be returning to times past, but with Valjiir off to SanFran and Sulu leaving to command the Drake, how can anything stay the same?

* Mudd-ying The Waters - Jim's back in command of the Big E - and guess who 'muddies' up his first mission? Oh, and there's an uncomfortable conversation regarding Spock and Del, too...
* Mentiri Et Veritas - Starfleet Intelligence has an important and sensitive mission in Romulan space, which requires four officers to impersonate Romulans: their own Special Agent and her team, Spock, Pavel Chekov, and Noel DelMonde. A novel-length story about sacrifice, betrayal and Warrior Bonds by Cher and Mylochka
* The Days Of Our Fathers (A Vignette) - How did pon farr come about?
* The Lady and The Tramp - Sulu's going twitchy on the Drake and Jeremy is bound and determined to do something about it.
* The Tears of a Goddess (A Vignette) - Jeremy Paget is understandably curious about Indiian culture.
* She's Not There (Vignette) - Eontril Plad returns to the thoughts of a brooding, Roshian poet.
* It Was A Very Good Year (Vignette) - the final year of the good ship Enterprise in espistolary form (look it up!)

* The Highwayman - One still night at Berkely (A Vignette) - NOTE: If you haven't read A Time To Be Born, read that story first!
* Once Upon A Time On Antares... - Ruth discovers that working nearly around the clock and missing her Vulcan husband can make for strange dreams.
* But It Has A Garden While Jilla is off reunioning with Sulu, Ruth gets a surprise at Berkeley.

* Raising the Stakes - Sulu takes command of the U.S.S Drake.
* Bad To The Bone - The Drake gets its new crewmember - with the same old problems. And as usual, the foul-tempered son-of-a-bitch finds he can't get away from his past. But this time there's a new twist to the same-old same-old. (explicit sex; same-sex)
* Scourge of the World (Vignette) - Del isn't following military protocol - so what else is new? - but the crew of the Drake doesn't know him as well as his former shipmate (now captain) does.
* Temper, Temper - There's friction between the engineers working on the Nests - and it's the fault of neither of them
* Bad Things (Vignette) - A chance encounter in the gym spells danger for Sulu and Del.

* Smoke (Vignette) - Sulu and Del have a standing 'date' for leaves.
* Looking Glass Life - A transporter not-quite-accident enmeshes Del in a transuniversal plot - and a bittersweet reunion.
And Looking Glass Life - The Other Side which is really self explanatory once you read the first one *grin*.
* A Clash Of Titans - The Drake is set to have another meeting with the High Stakes, but a distress call from a Federation Scout ship intervenes, setting the stage for... well, the title is "A Clash Of Titans".
* Warrior's Hymn - A gift from Jilla sets Sulu's mind to thinking about feudal Japan.
* A Flight Of Fancy (Vignette) - Del is bored - bored, bored bored!
* Black Swan - an accident in Engineering leaves Del sightless and vulnerable to his own demons - and angels. By Mylochka.

* Could It Be Magic - The Nests are almost ready for launch. The Enterprise is set to be decommissioned, her crew scattered by the whims of Starfleet - but there's one crewmember Jim Kirk isn't about to lose.
* Dependency Posting (Vignette) - Yes, Sulu and Jilla have been assigned to the same Nest - but what guarantee do they have of future assignments?
* Oy With The Old - the Nest ships are almost ready for launch, and an old friend invites several of the senior crew of all three ships to dinner. And there are surprises for a certain chemist and a certain Cajun...
* Winter Wonderland (Vignette) - Time is at a premium, so there's only a few hours for the captains of the Nest Ships and friends to enjoy a winter - well, read the title.
* Leather And Lace (Vignette) - A new chapter in the rocky romantic life of Noel DelMonde.
* Fanfare
* Mission One - the first mission (duh!) of the U.S.S. D'Artagnan: the Klingons are up to something - but, of course, when are they not? By Cheryl Petterson
* Dance Unrehearsed - The Enterprise is sent on a mission to finalize a treaty with the inhabitants of Paxilon 4 - but simple diplomatic missions are never that simple, are they?
* Black Velvet (Vignette) - Calaya Wheal performs for the crew of the Lincloln - and what a performance it is!
* The New Fish (Vignette) - A new engineer's first introduction to the Lincoln's Engineering team - and its imfanous Chief. By Mylochka.
* Queenship - The Lincoln encounters a new race - First Contacts are always so exciting!
* Amazed (Vignette) - More on the blossoming relationship of Noel DelMonde and Calaya Wheal. By Mylochka.
* Christmas Every Day (Vignette) - Yet more on the relationship between Del and Calaya. By Mylochka.
* Magic Man - Noel DelMonde has a song stuck in his head....
* Evening Shadows (Vignette) - A death in Engineering has Del in a downward spiral. Can even Calaya's love help him this time? By Mylochka.
* Bondage - Pavel Chekov, Chief navigator for the U.S.S. Enterprise NCC 1901, has a disturbing encounter with a young Romulan who looks remarkably like the captain of the D'Artagnan - proving that the past is never really as passed as it seems.
* The Midas Touch - The D'Artagnan encounters a strange rogue planet, with an even stranger satellite.
* All That Glitters (Epilogue to The Midas Touch - Noel DelMonde and Calaya Wheal receive a package from the D'Artagnan

Changeling - the ever-popular transporter accident brings the Imperial Sulu to the Enterprise, with no way to send him back where he belongs. What will Ruth Valley do when she realizes she'll never see her Roy again? (explicit sex, violence)
* Symbiosis (A "Hey, This May Have Really Happened!" Alternate) - Ruth and Spock, stranded, alone, on a planet that hosts no edible lifeforms. So how do they survive?
* Among Wolves (unfinished) - An Imperial transporter exchange story set in the early Enterprise years, about the time of Hotel California (explicit sex, same-sex, violence)
* A Game of Chance (unfinished) - What if the 'madman's run in Double Vision ended a little differently? NOTE: If you haven't read Double Vision, read that story first. (alternate to Double Vision;explicit sex; same-sex; violence)
One Day While Going Up The Stair - What if it were Spock instead of Ruth, Sulu, Jim and Jilla who believed himself to be sixteen? And what if there were - complications - regarding his bond with Jilla? (alternate to You're Sixteen, You're Beautiful, and You're Mine; explicit sex)
* Jewel (unfinished) - What if Sulu had never joined Starfleet, and, instead, had stayed with Cal? One of the "Variations on a Theme" alternates. (explicit sex; same-sex)
* Visions (unfinished) - an alternate to the Imperial Universe stories, Among Wolves and Among Sheep. What can happen when Federation officers trying to live in the Empire are found out - and then returned to the Federation.(explicit sex; same-sex)
* No Reply - an alternate ending to Lover's Cross. Get out the kleenex, folks. Sulu heard the song and insisted.
* Secret Seas (unfinished) - What if Spock hadn't agreed to Fleet's 'devil's bargain'? (Shadow Captain series alternate)
* A Little Bitty Bit Of Treachery - What if certain crewmembers decided to save Valjiir from the Klingons in Danse Macabre? (A Shadow Captain series alternate)