"That is a very lovely melody, Noel," Calaya Wheal commented as she scooped up a stack of tapes that had collected on the little shelf beside his bed. He had told her a thousand times that she didn't need to tidy his cabin for him. However, since she was a professional organizer of other people's messes, no attempt to dissuade her ever did much good.

Del was sitting on his bunk strumming his guitar. "I t'ink so," he agreed, content this time just to sit back and enjoy the view instead of objecting.

"Is it an Acadian song?"

The engineer rolled his eyes and shook his head. "Lord God, woman, but you is hard-headed."

Calaya stopped, made an exaggeratedly puzzled face, and tapped her head experimentally. "Too hard?" 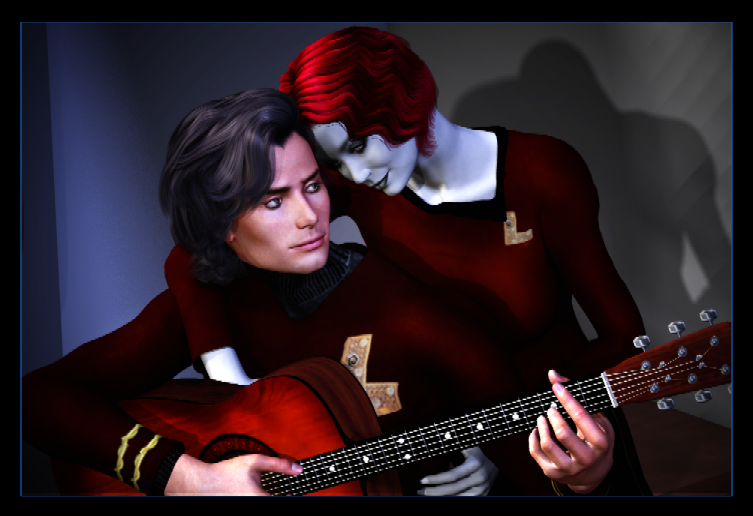 "Will not compromise yourself down t' sayin' 'Cajun,'" he explained.

She gave him a mildly reproving look as she brushed past to put his shot glass collection in order. "'Acadian' is the proper appellation for that cultural group, is it not?"

"Yeah, darlin', but how many times I need t' tell you you not gotta be that proper?"

"So, it is an Acadian tune?" she asked heedlessly as she grouped the tiny glasses by color before lining them up by height.

He sighed resignedly. "No."

She paused to kiss him on the back of the neck on her way to sort through the clutter on his dresser. "Are there words?

Calaya decided she could spare another moment for another delicious kiss just below his ear. "What is the story?"

"Not much of a story really." He turned so she could place her next kiss on his lips. "It jus' a man talkin' 'bout his woman."

She smiled. "Whom he loves?"

"Who he loves very much, cher," he confirmed.

The Indiian tilted her head to one side as she listened to the melody. "It sounds a little sad for a love song."

"It not sad exactly..." Del replied. "It jus'... Well, like this part o' th' song say, he a lonely man..." The Cajun found his voice unexpectedly catching on the words. "Who finds himself in th' middle o' somet'ing... that he not t'ink he really understand..."

She gave him another sweet kiss before continuing on her way to the dresser. "A problematic relationship, then?"

"No..." His eyes followed her sweet form as she bent to retrieve a discarded tunic. "No, an' that th' t'ing that got him so puzzled. He not able t' figure out what he done t' end up wit' a woman so good to him. An' he say to her, 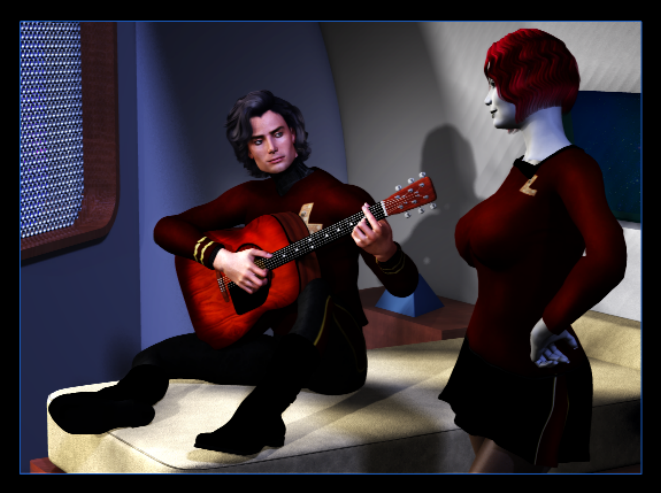 In response to the deep echo of unexpressed conflicting emotion the refrain released, Calaya turned and gave him a look that was full of fondness, understanding, and acceptance while still managing to mix in a strong dash of impish teasing. "This man should have more self-confidence," she said in a tone of mock-scolding.

"You t'ink he deserve to?" the Cajun asked, feeling almost shy after having unexpectedly revealed so much of himself.

She nodded, waves of love radiating from her like a warm ocean of endless affection. "He sounds like a very good man to me."

"Baby, I'm amazed at the way you're with me all the time,"

Calaya smiled as she stood there, as strong as she was beautiful, undismayed by how imperfect and hesitant his love could be.

he admitted, letting the music open his soul to her as much as it wished.
Who's in the middle of something
That he doesn't really understand
Babe, I'm a man and maybe you're the only woman
Who could ever help me
Baby, won't you help me understand."

When she stepped towards him holding out her hand, he put aside his guitar and drew her to him, letting their hearts make a music that required no other instrumentation.

"Maybe, I'm amazed," it echoed between them. "Baby, I'm amazed. Amazed with you."

To Make You Feel My Love written by Bob Dylan, performed by Adele.