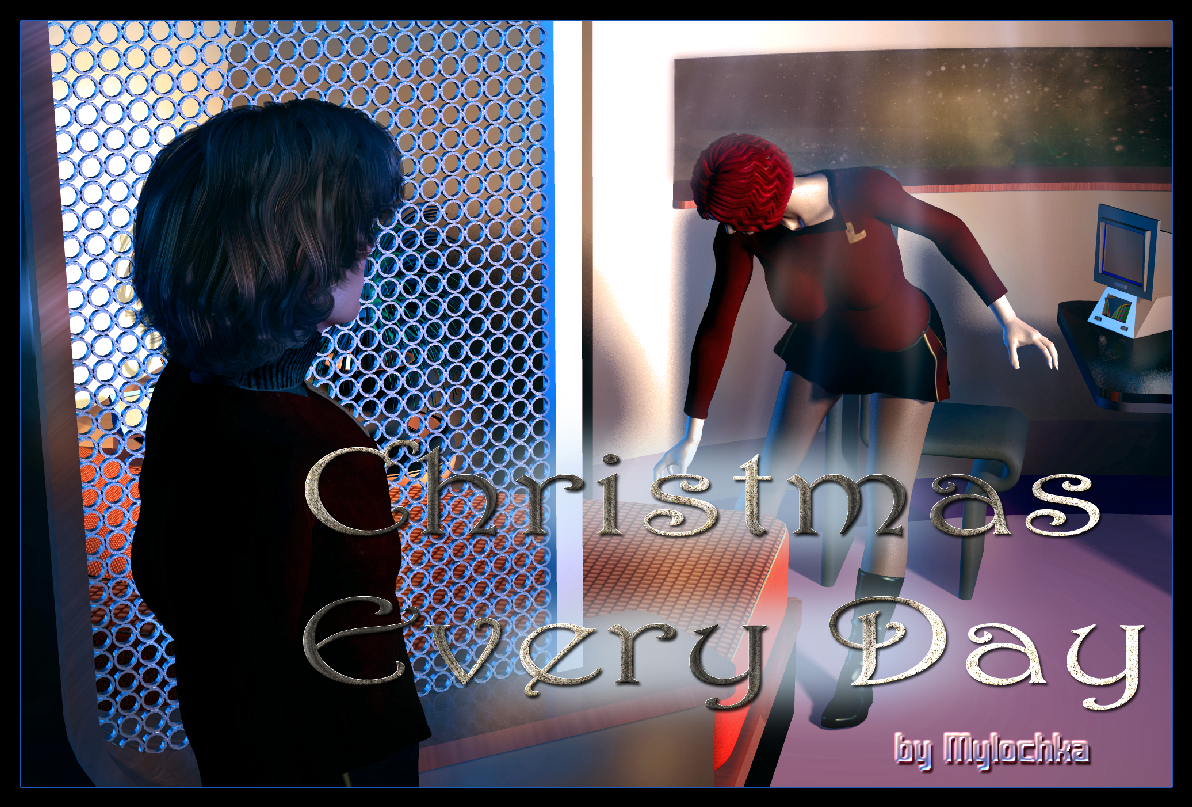 Having a new girlfriend –this time, at least -- was a little like getting a piece of Christmas every day, DelMonde reflected wonderingly as the door to his once cold and lonely cabin on the Lincoln opened to the wonderful smell of fresh coffee brewing and the sweetly spiced smell of her perfume. The red of her uniform, the silver of her skin, and the wine color of her hair all sparkled like ornaments through the decorative room divider as she bustled about, making everything perfect for him – just like the best little elf ever to have crafted a toy.  When she turned, smiled, and greeted him with a soft, “Ah, Noel!” it was sweeter than any carol he’d ever heard sung.

“If I tol' you once, I tol' you a hundred times, girl,” he scolded gruffly, pretending that he was wiping his eyes because they were watery from the hard work he’d been doing all day.  “You not my maid. You not my mama. You not hafta clean up my room fo' me.”

Calaya rolled her adorable alabaster eyes and stood on tiptoes for a kiss, which he had to grant with good grace since they both knew it was a bit of a faux pas to overload her bullshit meter that much two seconds after stepping through the doorway.

“The captain wanted an update on the retrofit of those specimen tanks you promised Biology,” she explained, lingering in his arms deliciously.  “I couldn’t find…”

“Noel, no.” The Yeoman firmly took his wrist and directed it towards three neat stacks of computer tapes.  “This is a copy of your original notes. These are progress reports from the project leaders in your department.  This is an executive summary for the captain awaiting your signature.”

Del’s mouth dropped open in awe. All his life, people had never been able to get him good presents.  Even his mother had difficulty. Since he was a telepath, he was almost impossible to surprise.  His struggles with chronic depression made it difficult to find anything that made him happy.  But here, little Calaya had -- not even on Christmas or his birthday -- got him the perfect present without even trying.

“Everything was already here,” she explained, glowing a little uncomfortably from this sudden burst of warmth from him. “It just needed to be… sorted.” 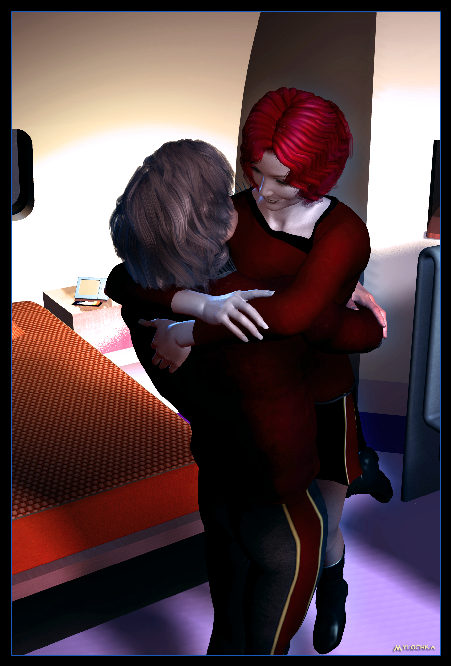 Del grinned at the monumental amount of understatement contained in this explanation.  He winked at the Indiian to let her know that his internal bullshit meter was registering just fine too.

“If I overstepped…” she began.

“I love you so much, baby girl,” he said, picking her up in a giant bear hug and smothering her with kisses.  “You jus' the sweetest li'l silver candy baby there ever was. I could jus' eat you right up.”

“Noel!” she laughed in delighted protest, then responding warmly when his kisses became deeper and less playful.

He sat down at his desk chair, still holding her, still kissing her.

This was another of the best things about this relationship. Unlike his other great loves, there seemed to finally be time for this relationship.  There was nothing pressing down on them. No rush. No mission. No inevitable conflicts that were going to spoil everything. Just time to be in love. Finally.

Del was so unfamiliar with happiness that he almost didn’t know what to do with it.  It made him feel as awkward as a teenager – all rough edges and sharp corners.

Calaya looked up at him, her eyes full of sweet concern for this incongruous mix of emotion. “Noel?”

He kissed her forehead and gave a half-laugh to smooth the moment over.  “When I was jus' a li'l boy, I usta say I was gonna have me a li'l silver fairy princess fo' a girlfriend. Ever'body thought I was crazy. Well, look at me now, would ya?”

The yeoman shook her head indulgently.  “You have said this before, Noel.”

He snuggled against her soft, sweet body. “An' I’ll say it again, my baby love.”

“Other Humans do not make such a strong comparison between Indiians and these mythological creatures,” she observed, resting comfortably against his chest with her arms around his neck.

“I have consulted references,” she confessed. The engineer lifted an eyebrow. “Oh, checkin' up on me, huh?”

“And I do not think fairies look Indiian,” she concluded seriously.  “To me they seem like… blonde Vulcans.”

“Bite your tongue,” he scolded in mock horror.

“What?” she said, laughing in indulgent confusion at the disconnect between his words and his emotion.

“Not all Humans is alike, girl,” he lectured solemnly, giving her a firm kiss on the brow. “I is an American an' we like to take bits o' culture from all places an' times an' mash it all up, turn up th' color, pump up th' cleavage a li'l, you know? Jazz it up some, non?”

She tilted her head to one side thoughtfully. “So your vision of a fairy is… different?”

“Yeah.  At the Mardi Gras, a fairy princess ain’t some snooty li'l queen. She a pretty li'l silver gal wit' sparklin’ pink or green or purple hair.”  He smiled as he pushed a wine-colored tress back from her silvery cheek.  “Eyes like rainbows. Melt your damn heart.”

Raising one eyebrow quizzically, she reached back and activated his desk monitor.  Using only one hand, she deftly punched in a request to the library computer and the screen filled with parade images. “They have wings, Noel,” she pointed out.

“Oh, them is fake, sugar,” he replied, dismissing the garish performers with a tap of his finger, then hugging her to him tightly.  “You th' real deal, baby.”

“Oh, is that so?” she smiled, melting into his embrace.

More than I deserve and all I could ever wish for, he thought to himself, wondering if, unlike his father, he could learn to be content to live a good life with a good woman and try to be a good man and just let the question of deserving it all be damned.

“Yep,” he said aloud, holding his love and happiness close… at least for this magical, endless, everyday moment.  “You fairy princess down to th' bone, cher.”