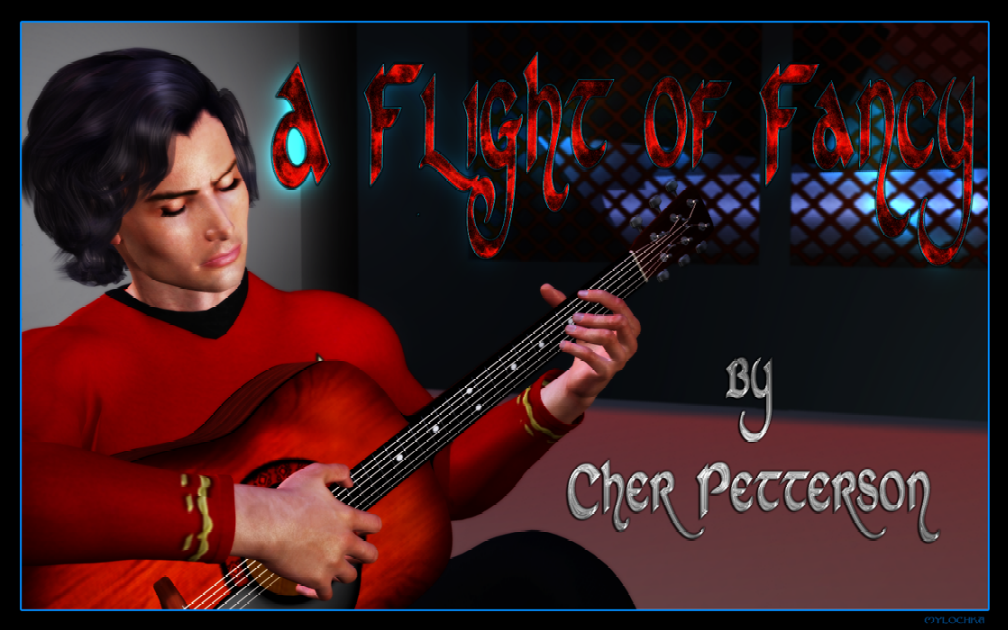 There was nothing to do in Engineering. The Drake was on routine patrol and the engines were purring like well-fed kittens. Every monitor that could be checked had been, at least twice. Everything that could be recalibrated had been, also at least twice. The tool crib had been emptied, cleaned, the nearly sparkling tools placed back in their assigned places with neat precision. The Jeffries tubes had likewise been cleaned within an inch of their metallic lives. The Engineering crew had even gotten around to some of the make-shift ‘upgrade’ work that was usually at the bottom of everyone’s ‘to-do’ list. When Del had bugged the Chief Engineer, Rivka Mazar, for something – anything more to do, she had smiled sweetly at him and told him he could always give Dylan Paine some extra tutoring. He’d growled at her and she’d put her hands on her hips challengingly, not unlike others of his acquaintance who were of Jewish descent. So he’d gone to his cabin and got his guitar and sat in an unobtrusive corner of Engineering, picking out melodies and chord progressions to the quiet approval of the crew who were just as bored as he was.

He leaned his head against the bulkhead, his dark eyes closed, his fingers moving idly over the strings. The music kept most of the other thoughts in the room at bay and he let his mind wander, skipping past recent, painful events to fleeting memory and better times. There weren’t many, and he decided to do some careful mental editing. The last thing he wanted was for the uncanny perception of his student and partner in emotional and sexual chaos, the aforementioned Dylan Paine, to kick in.

Th’ petit chiot jus’ come an’ mess up my hair, he thought sourly, then took a breath and changed the direction of his musings before they called up the very thing he wanted to avoid.

He called to mind the best things of his life – though without that judicious editing, he knew they would also be some of the worst: Women. His favorite subject. Friends, partners, foils, lovers – not th’ ‘ex’ part, he reminded himself. 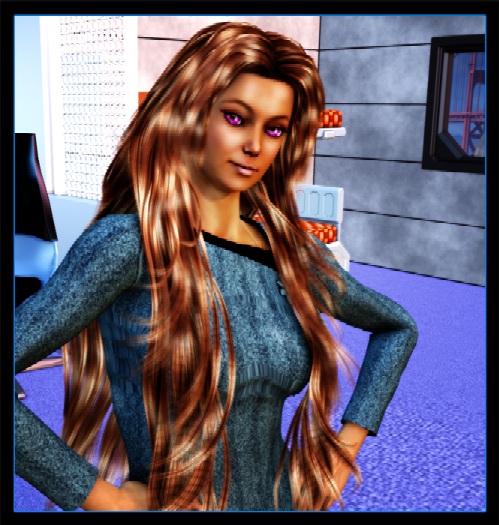 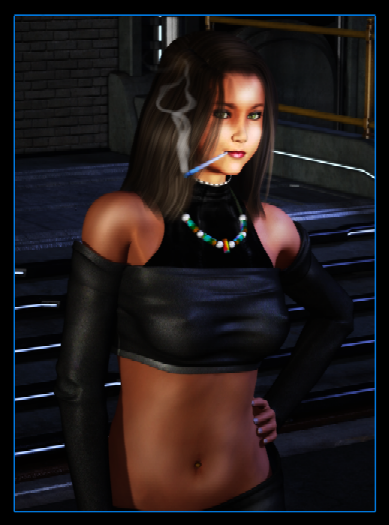 First, last, always was Ruth. His Raw-eth. He dismissed reality and thought instead of her beauty, her bright brassy exuberance, a carefree passion that no man could tame.

His fingers settled into a strident, bluesy rhythm.

He had loved her from the first moment he’d laid eyes on her, and she had loved him back. The time they’d spent together had been chaotic and exhilarating, careening to dizzying heights – no, I not t’ink ‘bout th’ depths jus’ now. It had been good and sating and exactly what both of them needed when they needed it.

Oui, that a good memory, he nodded to himself.

After Ruth, inevitably came her ‘lite’ version, Daffy Gollub. Cynical, sarcastic, witty, wise, hopelessly-in-love-with-the-biggest-moron-this-side-of-Jupiter Daffy. Del smiled to himself when he realized that, for as long as he’d known her, she’d always been in love with the biggest moron he knew. O’ course, that not stop her from sleepin’ wit me – leastways not when it that putz, Maxwell. The thought of Ruth’s cousin made him scowl, and he immediately lightened it with the recognition of how infection Yiddish curse words were. Daffy could get on his last nerve better than anyone else except Ruth – and the woman whose name it was painful to even form in his mind.

Li’l Mac, my Pelori, I miss you so damn bad…

An’ stop right there,

he scolded himself. This th’ time for good thoughts only, non?

“This is the ‘You’re a drunk and I don’t have sex with drunks’ speech.”

the voice of Lieutenant MacEntyre said in his memory.

He smiled. Ah, that better. You always give as good as you got, Li’l Mac.

He let his thoughts dwell on her sweetness and her strength, the gifts of her Human mind as well as those of her Indiian heritage. 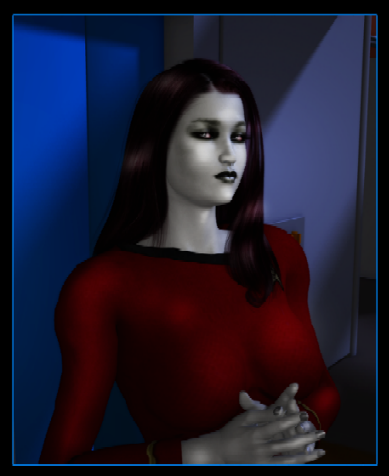 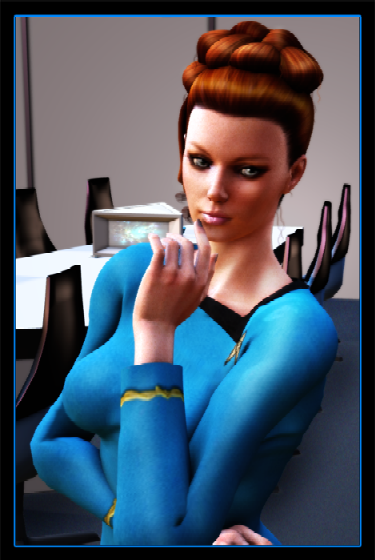 Which immediately brought to mind another Indiian with sweet strength, one who was not, never had been, and never would be either partner or lover. Jilla Majiir, or as Jer liked to call her, Lady Takeda.

Damn Ice Queen… he started to grumble, and again pulled himself up short. Non, jus’ t’ink ‘bout what mon capitaine see in her. Soft. Gentle. A calm port in th’ storms of th’ Divine Wind. Vulnerable an’ loving an’ tough as dylithium. Jus’ like Pelori.

He winced again at the name and took another deep breath. I love you, girl, he sent out to the cosmos, and almost fancied he could hear her answer: I was a wall, and my breasts were like towers; Then I became in his eyes as one who finds peace.

He cleared the melancholy, his fingers continuing the melody he’d unconsciously begun.

Who next? he thought, and got a picture of Jilla’s Academy roommate, vivacious, teasing, sex-on-the-wing Monique DuBois.

A smile broke over his lips. The flirtatious French girl was one of his favorite bed-partners, mostly because with her, there were no strings, neither of deep friendship nor of romance. They slept together because they both liked sex and could taunt each other in the language he called patois and she insisted was simply gutter-French. He was well aware that if her heart were able to be given, it was to Ramon Ordona, but she never thought of the Spaniard when with Del, so it was easy to ignore the claim Ramon insisted he had on her.

If Monique didn’t acknowledge it, why should he? 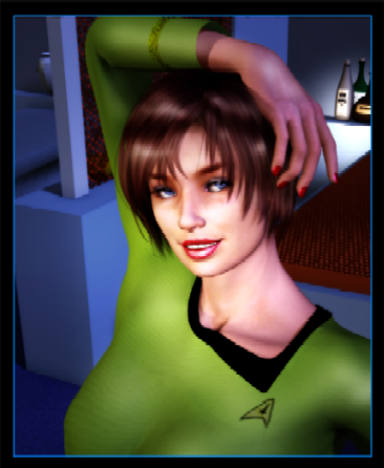 Like you decide t’ ignore th’ claim another man had on Raw-eth a couple years back, he thought bitterly, then shook his head. An’ we jus’ stop that train o’ thought right there.

He forced his mind back to reverie, letting himself get lost in the pictures of women in his mind. For a moment, Pelori and Jilla and Monique merged into an Indiian that was bright and strong and sexy and he lingered on the imaginary person for only a moment, the image shattered as his memory suddenly interjected picture a of Daffy smacking the back of his head for daring to think of anyone else. 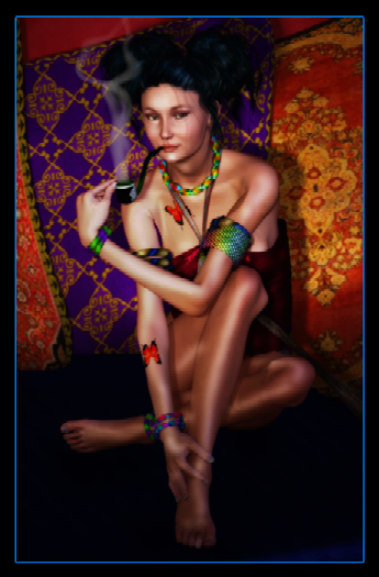 Hey, cher, I not T-Paul, he thought jokingly, and that led to memories of Dreamland Base and Flower-Loonies – and sweet, stoned Sakura. Sakura Tamura, who was head over heels in love with Sulu, Divine Wind and all, but who was strong enough to let him go to someone who could do more than simply accept that darkness. He had known her longer than he’d known Ruth, nearly as long as he’d known Daffy.

That brought memories of the Clave and he let the truth of his adolescence fade under the idea of wild, care-free sex, drugs and loud music, fast ships and the accolades that went with being the best Maker in the known universe.

Suddenly the words of a Valley collection song came into his brain, and he realized it was the tune he’d been playing. When Ruth had first taught it to him, he’d actually done some research, so he could upstage her with his knowledge of all things mechanical, past AND present. And so it was that he knew all about the old-style land vehicle the song glorified.

He smiled, and began to sing, letting the images in his head fuse with the words.

He thought of Ruth, and his smile widened.

“When you get on my nerves like you do.”

“Well, baby, you know you bug me
There ain’t no secret ‘bout that
But come on over her an’ hug me”

“Well, honey, it ain’t your money
‘Cause baby, I got plenty o’ that
I love ya for your pink Cadillac
Crushed Velvet seats
Riding in th’ back
Oozin’ down th’ street
Wavin’ to th’ girls
Feelin’ outa sight
Spednin’ all my money on a Saturday night
Honey I just wonder what you do there in the back o’ your pink
Cadillac
Pink Cadillac…”

TO WATCH THE VIDEO, CLICK HERE and scroll down to "Pink Cadillac"

To go to the next story in chronological sequence, click here!