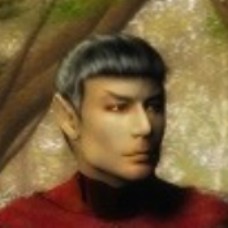 Spock Sareklrn Xtmprosqzntwlfd (a.k.a. Ĺyou-wouldnĺt-be-able-to-pronounce-itĺ or ĹZentem-whateverĺ) was born on the equivalent of September 11, 2208 in the city of Shi Karr, on the planet Jensh'hn of the 40 Eridani system. Terrans call this planet Vulcan, and the inhabitants Vulcans. Spock's father is Sarek Sepaklrn (see Sarek), (the Ĺlrnĺ is a Vulcan patronymic, Ĺson ofĺ) Vulcan's Ambassador-At-Large to the United Federation of Planets. Spock's mother is Amanda Grayson (see Amanda Greyson), a Human school teacher from Minneapolis Minnesota, United Nations of Earth, Sol/Jupiter system. Little is said of how they met, or why they married. The standard answer given, when asked, is "It seemed at the time the logical thing to do." (For more information on Vulcans, see Epsilon Eridani)

Spock was raised on Vulcan with occasional visits to Terra to see his motherĺs family. He was a taunted and tormented child because he was a half-breed. He resolved to out-Vulcan Vulcan. He joined Starfleet very young for a Vulcan, at the age of 20, after disappointing his father by NOT joining the Vulcan Science Academy. He and Sarek didnĺt speak for 18 years after that, although he kept in touch with Amanda like a good son should. After the Academy, he was assigned to the Enterprise under Captain Christopher Pike. When Jim Kirk (see "James T. Kirk") took over command, he stayed. He has, over the years, developed friendships with Jim, and with Dr. Leonard McCoy, and with Chief Engineer Montgomery Scott.

When he was 38, he met Ruth Valley (see "Ruth Valley"). She was a Science Officer assigned to the Enterprise. They developed a complicated relationship, part friendship, part boss/subordinate, part mentor/student - with that last one going both ways.

A year after Ruth joined the crew, Jilla Majiir (see "Jilla Majiir") came aboard and due to her husband's alteration of her genetics, experienced pon farr. Spock saved her life, and they became bonded. They acknowledge the connection, but each has freed the other to pursue love rather than duty, though they remain close friends.

After another year, Spock and Ruth finally admitted their deeper feelings to one another, and were married - though only by a Federation contract, since Spock's status on Vulcan had yet to be resolved, owing to the fact that the combat which gave T'Pring to Stonn wasn't exactly kosher (pardon the reference, Ruth) - since no one died.

Spock was forced into a devil's bargain in order to gain Fleet's permission to search time for Jim. He became the Captain of the Enterprise, with Ruth as his Chief of Sciences and Sulu as his First Officer. Spock deliberately forced away all those who cared for him, as part of his bargain with Fleet. Due to his behavior, Ruth was driven to an affair with Del. Spock stoically accepted this as his due until Ruth was attacked by a sauvrn, a telepathic parasite. Then Spock had to join with her mind to save her life, and told her what had happened to Jim and what he had agreed to. Ruth immediately stopped the affair with Del and helped Spock search for Jim.

When Jim was recovered from the past, Jade went with him to the rehabilitation colony on Jude and Spock retained the captaincy of the Enterprise, rebuilding his relationship with Ruth and with Jilla and Sulu. When Jim was fit to return to duty, Spock accepted promotions for his Command team, Ruth to Chief of Starfleet Computer Sciences and Sulu to Captain of the U.S.S.Drake. Jilla was also promoted, to Chief of Starfleet Engineering, and both she and Ruth were assigned to the SanFran Shipyards to complete the Class Two Heavy Cruisers. Spock remained on the enterprise as First Officer and Chief of Sciences serving again under Captain James Kirk for the year it took the Nest ships to be completed.

He is currently assigned as Captain of one of the Nest ships, imaginatively named by him Enterprise. Ruth is his First Officer and Chief of Sciences.