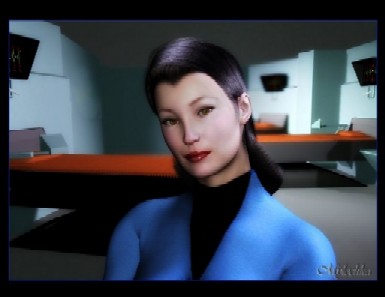 Jade Melissa Han was born November 5, 2211 on Rigel 9. Her father was a Human, also born on Rigel 9, named Li Han, her mother a feisty Ter-Irish woman named Kelly O'Shea. She moved from Rigel to Terra when she was 4 years old, settling in Minnesota, North America. She lived next door to the Greyson family. Greyson's sister, Amanda, had married a Vulcan diplomat named Sarek, and visited Minnesota with her half-Human son every few years. Which is where Jade first met Spock (see "Spock"), defending him from his cousins and a barrage of snowballs.

Jade's parents had a stormy marriage. Li was a quiet but controlling man and Kelly wasn't about to be a meek Chinese wife. Jade idolized her father and tends to blame her mother for the break-up of their marriage. Jade recalls hearing them argue, her father coming in to her room, where she would pretend to be asleep, his sitting on her bed, gently stroking her hair (which he always called "the silk waterfall") then sighing and whispering "for you, Jade. I'll try one more time for you." They divorced when Jade was 12.

Li Han moved back to Rigel, but visited Jade on Terra often. One day, when Jade was 16 and Li was coming to visit her, his passenger ship crashed, killing all aboard. Jade blamed herself for his death.

She entered the field of medicine, specializing in psychiatry, particularly the Freudian school. During her studies at Alterra, she met and fell in love with Richard Novacek. He proved to be very much in need of therapy himself, and Jade attempted to provide him with the help he needed. It was in vain, however, and Richard committed suicide, blaming Jade for her 'failure.'

Jade began a series of xenopsychological studies for Starfleet, in the course of which she met Selar of Vulcan (see Selar). She fell in love with him, though she never told him, and was shocked and heart-broken when he introduced her to his Indiian wife. She maneouvered him into telling her about his alteration of Jilla (see "Jilla Majiir"), and became friends with her. She was devastated when Selar died, but did not discuss her grief with Jilla.

Jade was assigned to the Enterprise and was quite shocked to find Selar's Indiian wife living with another man. Still, she was able to overcome her own anger and sense of betrayal and continued her friendship with Jilla. She developed a friendly relationship with the wife of her childhood friend as well, though she and Ruth often trade jibes over Jade's profession.

Jade has one vice: a tendency to smoke a fair amount of Rigellian when she's under stress or needs to relax. She is also deeply in love with Captain James Kirk (see "Jim Kirk"), though it took her a while to admit it to him - and to herself. She was his therapist on the rehabilitation planet Jude during his convalesence from being mind-sifted, and returned to the Enterprise with him. They were finally wed just after the Nest ships were completed, and she serves as his Chief Medical Officer aboard the U.S.S. Lincoln.

Jade is currently continuing her series on xenopsychology, and is one of the foremost, respected psychologists in the Federation.