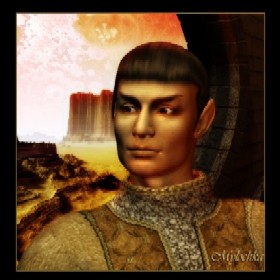 Selar Seliklrn Vtgrgdantm was born in Shi Karr in 2205 on Vulcan on what is the Terran equivalent of July 11. He studied at the Vulcan Science Academy, and lived a normal Vulcan life. (For more information on Vulcans, see Epsilon Eridani) In 2238, Selar was the subject for the Federation's Xenopsychology Study, conducted by Dr. Jade Han (see Jade Han). In the course of the study, he and Jade became good friends.

In 2239, at the age of 34, he visited Epsilon Indi for a Genetics Conference and field expedition. There he met Indi's ambassador to the Federation, Jole Costain, and Jole's family, including the Indiian's fifteen year old daughter, Jilla (see Jilla Costain Majiir). Quite illogically, he fell in love with her, and she with him. Due to Vulcan cultural prohibitions regarding casual sex, he proposed to her a few days before he was to return to Vulcan. She accepted, and received her family's consent (with grave misgivings). Selar and Jilla were married by the Indiian ceremony of mnorindar, the legal requirements of which mandate fidelity for a literal eternity.

On returning to Vulcan, it soon became apparent that an Indiian temperment was unsuited to the strictures of Vulcan life. Selar had been researching the genetics of the Vulcan bioloical mating cycle, and with the information garnered from the Genetics Conference, he postulated a technique by which genetic traits could be transfered from one species to another. With Jilla's pleas and urging consent, he attempted to aid her transition to Vulcan requirements by the use of neural enhancements and the blockage of certain emotional chemical synapses. He used his own genetic material as a base, and was strikingly successful.

However, due to the natural blindness of a culture for its own givens, he forgot to screen the material for one solely male characteristic; the enzyme responsible for the blood fever known on Vulcan as plak tow, the drives of pon farr, the mating imperative. This, however, was not deemed a problem, as Vulcan partners are psychically linked and Jilla's Time would come when Selar's itself did.

Selar and Jilla resided on Vulcan in wedded bliss for four years. Jade Han was a frequent visitor. In 2244, Selar was killed in a laboratory accident. He and Jilla have no children.