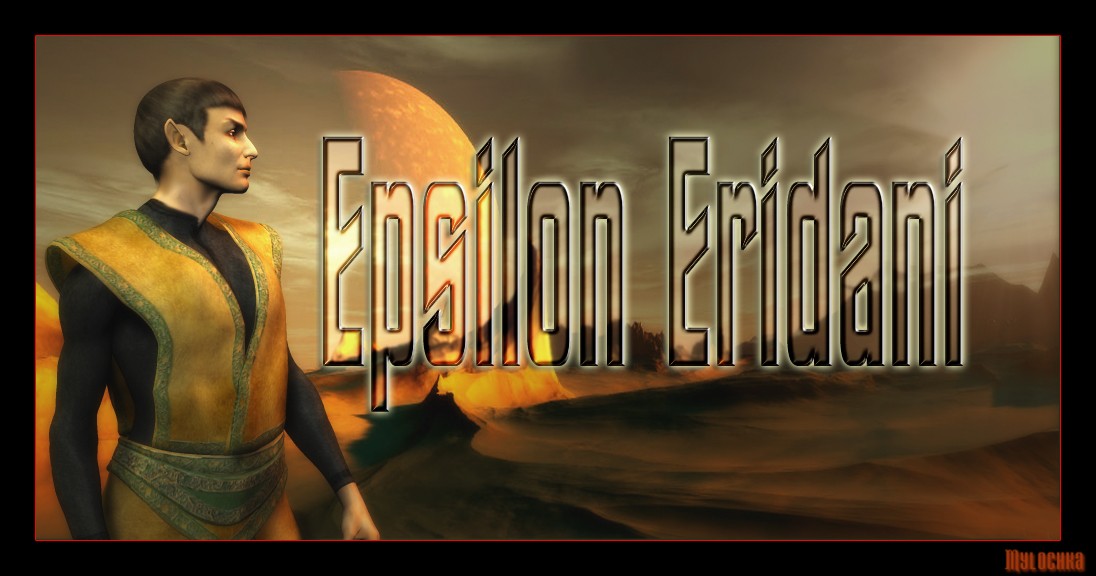 Epsilon Eridani is one of the founding members of the Federation. Terrans call it Vulcan due to the hot, dry, desert-like climate. The Vulcan word for it is Jensh'hn (jen-sah-[stop]-AHN) and their name for themselves is Jenshanni (jen-SAHN-nee). Vulcan is a planet with an orange-red sky and vibrant geological formations; strikingly sharp mountains and rising outcrops of rock. The Vulcan sun is a red giant, and Vulcan has seven moons (yes, I know Spock once said to Uhura, "Vulcan has no moon," but I assure you, he was teasing her as she was teasing him).

Vulcan is ruled by a Council of Elders. The Council consists of representatives from Vulcan's seven major Clans, with a Head elected by the Council Members once every seven years. Spock's paternal grandmother, T'Pau, is the current Head of the Vulcan Council. 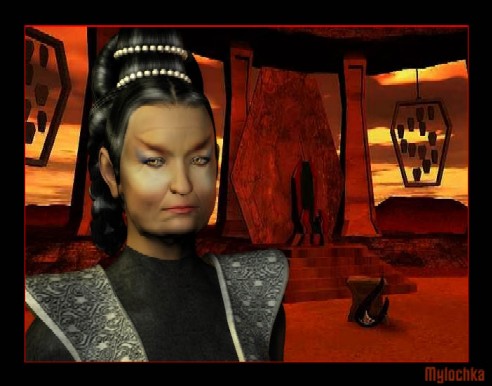 Vulcans are one of the oldest known sentient races, having a recorded history of over 20,000 years. They are a tall, thin humanoid people, with copper-based blood, giving them green-toned skin. The Vulcan atmosphere is thin, and Vulcans have elongated, pointed ears to aid in capturing sound. Thus their hearing is exceptional. They have upswept eyebrows and an inner eyelid that protects their eyes from the harsh rays of Vulcan's red sun. The gravity of Vulcan is much greater then Terra, which also makes Vulcans approximately five times stronger than Humans. Vulcans are telepathic, extremely intelligent, extremely pacifist, and are famous for their logic and controlling of all emotion.

However, this is a conscious choice, made by all Vulcans at age seven at their coming of age ceremony, called the mok farr (mowk-fahr). For Vulcan males, this ceremony occurs after a week-long trial of survival in the desert known as the kahs wan (kahz-WAHN). To achieve the right to the mok farr, the young man is required to accept of the Way of Surak. And while Vulcan females undergo no such trial, they, too are required to formally accept the Way. And just what is this Way of Surak, and where did it come from?

Surak was a great philosopher who preached the virtues of peace and logic over 5000 years in Vulcan's past. Vulcans believe it is only due to The Way, the submission of all emotion to logic, that they survive as a people. Their history before Surak was one of blood feuds, Clan feuds and constant battling for land, women and supremacy. One who does not accept Surak's Way at the mok farr is considered outcast and Clanless. Less than one half of one percent of Vulcan males (and even fewer females) reject Surak's Way. It is, however, important to understand that Surak's Way does not state that there is no place for emotion in a Vulcan's life; only that it be given its proper consideration as subordinate to the factors of logic and peaceful intent.

This is an all-important choice, for a Clanless male will find few, if any, families willing to Bond their daughter to him. The mok farr is the ceremony by which a Vulcan male is 'pre-bonded' to a female of his parents' choosing. Their minds are telepathically tied together so that the female will be aware of and respond to the male's call when he begins his pon farr (pown-fahr) cycles. And what is pon farr?

Due to a planet-wide cataclysm over 10,000 years ago (a war with nuclear weapons and resulting massive radiation, referred to, logically, as The Cataclysm), Vulcans have an evolutionary mating cycle. Once reaching maturity, the Vulcan male loses his ability to control his emotions and requires extensive sexual activity with one who is in telepathic sync with him – or he will die. This is called pon farr, but most Vulcans refer to it simply as The Time. The biological explanation is as follows:

A mutation caused by the massive, planet-wide radiation created the formation of a particular enzyme called by Vulcans, faar'k (fahr-[stop]-ahk). In the female Vulcan, because of her two similar chromosomes, the enzyme carries with it genetic instruction that stabilizes the cyclical build-up of the enzyme and the mating drive associated with it. That coding is absent from the male dissimilar chromosome. Approximately every seven years, the enzymic build up overrides the male's neurological system, causing the chaotic state of pon farr. The side effect of the enzyme for the female - perhaps, in some respects, fortunate - is technical frigidity. This has the effect of ensuring that there will be no competing urge within her at the male's Time. As a way to guarantee the production of offspring during what was a subsistence-level existence, this was a favorable mutation, and was therefore evolutionarily selected for. Once the mating cycle was established, it was, of course, self-replicating. 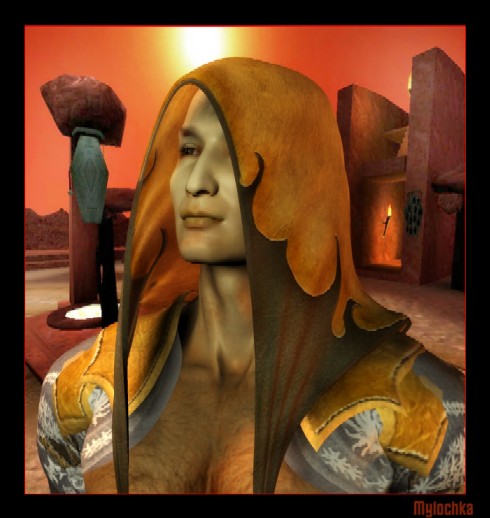 A complimentary facet of ancient Vulcan life that is still practiced is the female's right of Challenge. If a woman bonded to a male decides, as she grows, that the match is not to her liking (for strictly logical reasons, of course), she is allowed to Challenge at her Bonded's first pon farr. In this ritual, called the kal-if-fee (kahl-eef-FEE), she chooses another male as her Champion, who then must fight with her Bonded to the death. The winner claims her as prize – and it must be noted that she is then considered chattel, the property of the winner, not his wife. The ancient term for such chattel is kal'aroun (kahl-[stop]-ah-ROON). While is it usual for the victor to treat the woman as any male would treat his wife, it is a legal fact that such a male could, if he chose, take another as Bonded wife. In Pre-Surakian Vulcan, it was common for a male to hold many kal'arouns, as, even after becoming lawfully wed, a male can still act as Champion during a kal-if-fee ritual.

The ceremony by which the pre-bond of two Vulcans becomes a competed marriage is called kah-if-farr (kah-eef-FAHR). The ritual itself, as might be expected, involves a trial for the male. He must prove his desire by leaping over a blazing fire pit to reach the female. One this is accomplished, the two retire to a cave maintained within the family's mating grounds, called koon-ut-kal-if-fee (KOON-uht-kahl-EEF-fee), where they remain until the male's drive is dissipated, usually with the conception of a child, for the hormone secreted by that process causes the collapse of the male's enzymic build-up. If no child is conceived, pon farr and its assciated fever, called 'blood fever' or plak tow (plahk-TOW), will usually last four to seven days, when the build-up dissipates naturally due to the utter depletion of the male physiology. Without such extensive sexual activity, the build-up eventually destroys the male's entire neurological system, causing brain hemorrhage and death. There are hints in Vulcan's past of an honored homosexual Warrior Bond, but this is rarely spoken of and would not be accepted or acknowledged by the ruling Council.

Before The Cataclysm, Vulcan was a star-faring race. They had colonized other systems, most notably that which the Federation has come to know as Romulus. Cut off from their forefathers, the Romulans maintained their martial ways, but, more importantly, escaped the radiation which caused the mating drive. Romulus is a hot, lush, world, and it is believed by some that this was the climate of Vulcan before its nuclear devastation. Some also believe that the Romulans are proof that there was another way, besides Surak's, that Vulcan could've survived as a culture. This view, of course, ignores the subsistence level to which Vulcan was reduced during The Cataclysm, the 5000 years after that before the time of Surak, and, of course, the 5000 years since.

While the Vulcan government is logically egalitarian, this equality does not hold in a Vulcan household. There, the husband is ruler, with his wife and children expected to accede to his wishes in all matters. This, of course, is a holdover from the Warrior days before Surak – a fact which the Vulcans seem all too ready to ignore. Given the biological destiny of Vulcan males, however, such strict control over their life's blood can, perhaps be forgiven. The word for father, farrn, (fahrn) denotes the same authority as ‘master.' The word for mother a'an (AH-[stop]-ahn) means, literally, 'belonging to.' Sons are given a patronymic -lrn (-lern); thus Spock is Spock Sareklrn. The daughter's patronymic is 'an ([stop]-ahn): T'Pring Solan'an.

Vulcan's greatest contribution to the Federation is the Vulcan Science Academy. This august institution is the center for scientific study in the Federation, with most serious devotees of science studying or teaching there at one point or other in their careers. The notable exception to this, as might be expected, is Ruth Maxwell Valley.