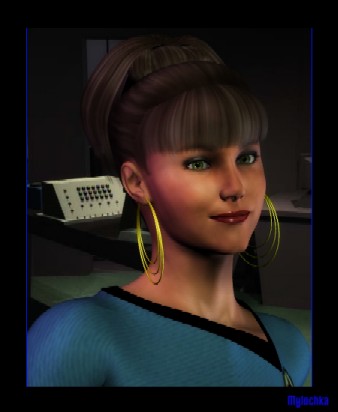 Daphne Gollub was born in the year 2223 in New York City, New York State, North American continent on Terra in the Sol-Jupiter system. She is the only child of a rather elderly, very Jewish couple, Benjamin and Sarah Gollub. Her mother died when she was six, of xenopolycythemia. Her relationship with her father is very rocky, mostly due to the fact that she is anything but the dutiful Jewish daughter.

Daffy is a highly intelligent young woman, bright and mischievous, bossy, stubborn, and inside a somewhat lonely person. She was a Groupie at the Clave beginning at a very young age. Having an interest in chemistry, she experimented with recreating Haven drugs, and applied herself to that subject at Alterra University, where she met Ruth Valley (see Ruth Valley). Because of their shared heritage and personality traits (a fact both of them would hotly deny – the personality, not the heritage) they became fast friends. Daffy is a year older than Ruth, and swears Ruth follows her (to Alterra, to the Clave, into Starfleet, and onto the Enterprise).

At the Clave, Daffy fell head over heels in love with David Maxwell, Ruth’s older cousin (see David Maxwell). She tried, when with him, to become the proper, genteel, subdued girl he wanted, but her true self always made itself known, and David never returned her affection – though he did, as a Racer, take full advantage of her status as Groupie (which meant sex when he wanted it). This is one of the reasons she decided to join Starfleet, though she usually claims it was to get away from Ruth.

Once assigned to the Enterprise as a chemist, she became friends with Uhura and met and began an on-again/off-again relationship with Pavel Chekov (see Pavel Chekov). When the Nest ships were completed, she and Pavel finally worked out the last of her psychological blocks and ahe and Pavel were wed. She serves on the Nest ship Enterprise as Ruth's Assistant Chief of Sciences, where Pavel is the Chief Navigator.

Daffy peppers her speech patterns with the Yiddish she learned at home, and while Jewish, is anything but observant. Her birthday is August 19, which makes her a Leo.