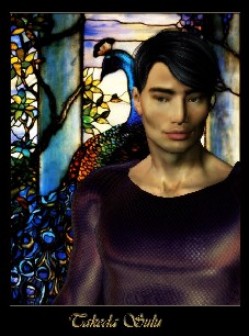 Sulu was born in Los Angeles on June 18th in the year 2221 of a Japanese father (Jiro) and a Japanese/ Korean mother (Midori). He's from a traditional family, with one older brother (Ichiro) and one younger sister (Hana). Hw was raised with the concepts of bushido but never paid too much attention to that until joining Starfleet. Like most Terrans, he attended Alterra University, the planet-wide system of higher education, beginning at age 15. His father was a racing enthusiast (racing is a sport done in one-man craft called 'needles' because of their sleek design). Illegal racing is engaged in by teens and young adults at The Clave, which is financed by wealthy ex-racers, and secretly by Starfleet as a training ground for engineers and pilots. Because of his father's enthusiasm, he fell into the Clave sub-culture. (For more information on the Clave, see The Clave)

His sexual history, at least at its inception, had a traditional Japanese background, which means he was taken to a high-class courtesan by his father on his fifteenth birthday to be instructed in the sexual arts. He did the usual amount of playing 'doctor' and exploration as a child, a lot of it with Jeremy Paget (see "Jeremy Paget"), who was and is his best friend. His first heterosexual experience after the traditional Japanese courtesan was with a Japanese girl his own age (Stephanie Kinsai). Very soon after, he became involved with the Clavist sub-culture, where he had numerous casual sexual experiences.

A natural pilot, Sulu became very good at racing very quickly. He was designated Heir Apparent after racing for about 6 months. He started attending parties at Cal's (see "Ruis Calvario") penthouse soon after he started racing. Ruis Calvario had been a racer himself when he was younger (he was in his mid-to-late-forties when Sulu met him). His 'parties' consisted of lots of chemicals and lots of sex.

Cal took an interest in Sulu: helping him finance Kamikaze, spending time with him at parties, giving him first shot at the best drugs and the best rooms for sexual escapades, etc. Sulu had at that time a steady (though not monogamous) relationship with Stephanie. The first time he was at a party without her was the first time Cal offered him amber. Sulu loved what amber did for him and after that, wanted to take it all the time.

He was a very popular lover at the Clave for two main reasons. First, he has a lot of stamina, and a good imagination. Second, he intuitively knows what his partners want.

He began a very unhealthy relationship with Cal, which didn't end until Cal was revealed as the Hunter when Sulu was in the Academy.

Jeremy and Sulu soon became lovers. They argued a lot about his relationship with Cal, but Jeremy was never possessive or jealous. Sulu contracted 'Starfleet fever' and began studying for the Entrance exams. He and Cal fought a lot about that.

He was accepted into Starfleet Academy and began his career as a Cadet just after his 18th birthday. He had numerous affairs while at the Academy, although none of them were serious. He trained in both Command and Security, and was commissioned as a helmsman, assigned to the Enterprise.

Though his promiscuity continued, with both male and female crewmembers, his excellent record ensured his quick promotion to Lieutenant and to the position of Chief of Security. He formed casual friendships with many crewmembers, but after Jeremy, never a really deep one until he met Ruth (see "Ruth Valley").

When Jilla (see "Jilla Majiir") came on board, he was immediately attracted, though it took the release from her pon farr state to make it mutual. The strength of his feelings toward her has committed him to the first monogamous relationship he has ever had - or wanted.

Despite this, and due mostly to his own psychological problems, Sulu had an affair with a beautiful Chinese science officer, Ensign LiLing. When it became obvious that Jilla was literally dying without him, he came to his senses. Jilla forgave him and he accepted Indiian damnation. LiLing died in a transporter accident shortly thereafter. And how can you even think Jilla had something to do with it! Shame on you!

Sulu became Spock's First Officer duing "Shadow Captain" and continued in that position during the year of Jim's recovery. During that time, it was discovered that Sulu and Jilla share a Vulcan bond, due to McCoy's 'miracle cure' of Jilla's pon farr. Jilla's proto-bond with Spock was severed, and Sulu now has sole claim to her.

When Jim returned to the Enterprise, Sulu was promoted and received the captaincy of his own ship, a destroyer, the Drake. Since Jilla was assigned to SanFran Shipyards to complete the Nests, Sulu worked on a way for Starfleet to acknowledge his relationship with Jilla so as to receive a dependency posting with her. He is currently the captain of the U.S.S. D'Artagnan - and yes, he and Jilla received their dependency classification.