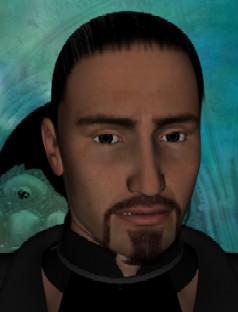 Ruis Calvario was born on November 13, 2190 in Rio di Janeiro, Brazil, South America. His mother was a Native Brazilian named Maritsa and his father was Spanish, named Juan. He was something of a financial wizard, extraordinarily wealthy, with vast-ranging business interests. He did a lot of business with Havens and with Starfleet and was considered THE patron of the Clave. He gave parties for Clavists at his penthouse in Rio that were really all about sex, drugs and music - and lots of all three.

He formed (some would say coerced) a sexual relationship with Sulu (see "Sulu Takeda") beginning when Sulu was 15 and lasting until Cal was revealed as the Hunter by Spike, Cobra and Barak. This relationship had many unsavory elements to it, and it haunts Sulu to this day.

Cal is currently incarcerated at the Elba Rehabilitation Colony.