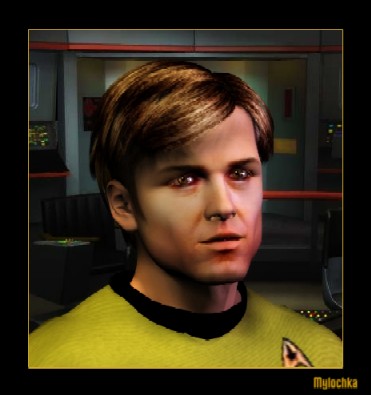 Pavel Andrevitch Chekov was born in Moscow, Russia, Asian continent, Terra, Sol-Jupiter system on September 21, 2223. The only son of Illyana Rostov and Andrei Chekov, Pavel was treated as a golden child. He was intelligent, bright, precocious and adored by his family, but was raised to be self-sufficient, logical and, being Russian, stubborn. These qualities served him well in his studies, both at Alterra University and at the Starfleet Academy, where he earned the reputation of being a serious student if a little naÔve. Due to his generally friendly nature ñ and the fact that he was a very cute young man ñ he also earned the reputation of being an easy mark for practical jokes., unwelcome same-sex advances and romantic misadventures. His inborn stoicism and stubbornness allowed him to brush off these trials fairly easily ñ but no one knows for certain how deeply such things have cut him.

Pavel belongs to a very rare category of Terrans who have no psychic abilities whatsoever. He is not even the smallest bit empathic nor telepathic, having no innate intuitive sense or personal radar. This often makes him appear dull, and he has taken it upon himself to garner facts as a cover for this lack ñ to the point of often being pedantic and supercilious. This seems very much at odds with his looks and genuine desire to please, and often causes people who donít know him well to think that heís either a) something of an automaton and/or b) an insecure nebbish (as a certain Miss Gollub would say).

Having said all this, would it surprise you to know that Pavel has had many, many, many casual relationships with many, many, many women? Remember, the man is cute! Adorable, even. He is a true connoisseur and lover of the female in all her delightful and varied forms, and is an attentive and devoted lover. At least, for as long as a given relationship lasts. It is said of him that he falls in love so easily and so often that one is never really sure heís in love at all.

However, it must also be remembered that Pavel is Russian, and so is prone to the bouts of sullen pessimism so common to the people of the Balkans. He can also drink like the proverbial fish, and his favorite spirit is, of course, vodka. And there are times when his Slavic stubbornness can land him in very hot water. To his credit, he can at times poke fun at himself, with such things as an exaggerated pretense to ascribe every major positive scientific or cultural advance to someone from Mother Russia. At least, Iím pretty sure itís an exaggerated pretense.

Pavel was the roommate of Noel DelMonde (see Noel DelMonde) at Starfleet Academy, and formed a friendship ñ if one can call it that ñ with the Cajun engineer. He was an eye-witness to Delís tempestuous relationship with Ruth Valley (see Ruth Valley), who still teases him unmercifully about it ñ which he accepts with true Russian stoicism.

Pavel was assigned to the U.S.S.Enterprise straight out of the Academy, as a Navigator with a secondary position in Sciences. He immediately came under the wing of Science Officer Spock, who he hero-worships; so much so that he adopts the Vulcanís speech patterns and mannerisms when functioning in any tutorial relationship. He formed close friendships with Uhura and his helm-partner, Sulu (see Takeda Sulu). When DelMonde was assigned to the Enterprise, Pavel was again assigned as his roommate ñ a situation which distressed them both.

Pavel was in a long-term on-again/off-again relationship with Daffy Gollub (see Daphne Gollub), who claims that because his mother is Jewish, he must be, despite all his protests to the contrary. If Pavel has any serious religious beliefs, he keeps them well to himself. Pavel puts up with a great deal of what might generously be termed abuse from Daffy, although in private, he can give as good as he gets, though, fortunately for the galaxy, he usually manages to avoid doing so. Itís probably why they kept getting back together after breaking up (usually on Tuesdays). After the Nest ships were completed they not only actually moved in together, Daffy finally became Mrs. Chekov. Pavel now serves as Chief Navigator on Spock's Enterprise, with Daffy as Ruth's Assistant Chief of Sciences.

Pavel is a Virgo, and if he knew that, had Spock been born on Terra, the Vulcan would be of that astrological sign as well, and if he believed in astrology, heíd no doubt be overjoyed.