The "L" Word
(just before You're Sixteen, You're Beautiful and You're Mine)

Without putting a lot of forethought into the matter, Daffy Gollub suddenly decided hat the moment was perfect to broach a topic that had been bothering her for some time now. "You've never said that you love me."

Chekov didn't even look up from the reader he was studying. "I'm very fond of you."

The navigator resolutely paged forward in his text, still refusing to make eye contact. "I do not wish to quarrel."

Gollub reached over and hit the deactivation switch on his reader. "Too bad."

Chekov sighed and put the reader on the shelf behind his bunk. "It must be Tuesday..."

The navigator finally turned to look at the woman sharing his bunk. "You tend to break up with me on Tuesdays."

"Smartass." Gollub rewarded him with a punch in the arm. "Knowing that our breakup sex is always fantastic is beginning to make you reckless... By the way, why is our breakup sex so much better than our regular sex?"

Chekov shrugged and looked at the ceiling. "I think it has something to do with the fact that you're insane."

"Oh, it's definitely a Tuesday," she replied pointedly. "Isn't it?

"Actually," he couldn't stop himself from pointing out, "there are no Tuesdays in space."

"What did I say about being a smartass?" she said, punching him in the arm again. "I don't know about you. Sometimes I'm getting a definite 'love' vibe, but then you're never with the actual saying it."

"I consider such a statement a very serious commitment."

"Martha Landon dumped you because she got tired of getting thirty or forty 'I love you' messages to her a day while she was on duty," Gollub rebutted.

"That's not why we... That is to say I..." Chekov began, then shook his head. "I do not wish to compare relationships. There were circumstances that..."

"And I don't see why I have to pay for what every bitch you've ever slept with..."

"You yell at me," the navigator interrupted flatly.

"You yell at me," Chekov repeated, making eye contact with the ceiling instead of her. "And embarrass me in public... And break up with me on Tuesdays..."

Gollub was surprised at how hurt she was. "And so... that's why you don't love me?"

"No." The navigator quickly turned towards her and stroked her arm. "I did not say that."

"This argument is all about what you don't say," she reminded him, removing his hand.

"You have never said that you love me," he gently reminded her.

Gollub folded her arms. "I'm not saying anything until you do."

The Russian sighed. "It would seem we are at an impasse."

Story of my love life, Daffy thought as she nodded. "This is the real reason why we break up every Tuesday."

"It's probably the reason for the quality of the lovemaking as well."

Gollub raised an eyebrow. "What are you talking about?"

"What you call 'the breakup sex'," Chekov explained awkwardly. "It may be better because of... this..."

The navigator shrugged uncomfortably. "After we break up or when we reconcile, perhaps we aren't thinking so much about who has or hasn't said what to whom. We are only thinking of how much we..." Chekov teetered dangerously on the edge of the "L" word before pulling himself back. "...how fond we are of one another."

Daffy looked into his sweet, sincere, damnably stubborn face and suddenly had a very, very clear idea not only of why she left him so often but also of why this was the man she kept coming back to.

"Nothing," she said, putting her arms around him. "Just shut up and take your breakup sex like a man." 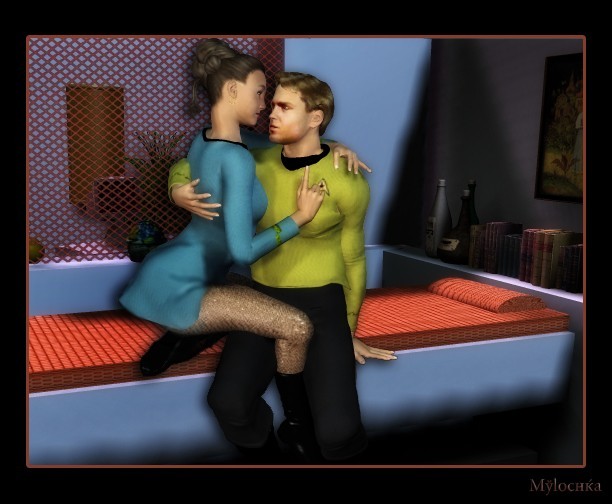