A Series of Vignettes
by Mylochks
THIS vignette by Cheryl Petterson

Dear Diary,
I'm depressed - which is not as unusual as those who think they know me would have you believe - and why am I addressing a log recorder as if it had a personality?
We survived the Flower-Loonies - though, in a way, I didn't. Simulated death for the cause because, as Cobra put it - I was more a liability than he would've ever believed possible. Not that he's claiming any superlative attention to duty or anything sick like that - and my pretended demise did help the mission. It's just that my Groupie instincts got waylaid by my God-only-knows-why infatuation with a certain Russian navigator. I couldn't help myself. I tried, I really did, but seeing my Pavel mooning over his you-never-forget-your-first-fuck bitch of an Eden-head did something unlikely to my brain. And my heart. Which is why I'm recording this.
I'm in love. I know, for normal people this usually isn't depressing unless it's the unrequited kind. Which in this case, God be praised, it isn't. Could you just die of such shock? But no shit, Pavel really loves me. At least, I think he does. No, I know he does. Unlike my only other real, honest-to-God-I-think-I'm-in-love insanity. Which is why I'm depressed. Because I've had to look at my behavior and my feelings and realize that though I am indeed (to quote His Bossness) in love, I can't stop thinking about David.
David Joshua Maxwell. Mensch's cousin. The grand and glorious Barak - some pretentious name for a racer, seeing as how it means 'lightning.' Every Jewish girl's dream-boat. The callous, manipulative, using son-of-a-bitch who was my you-never-forget-your-first-fuck.
Now, if I was going to be fair, I'd remind myself that he was a Racer and I was a Groupie and it never went beyond that for him. Groupies don't fall it love. It's part of the unwritten code. Groupies are for good times and sex, drugs and rock-n-roll. You don't take a Groupie home to meet Mother. But he broke my heart and I don't have to be fair. 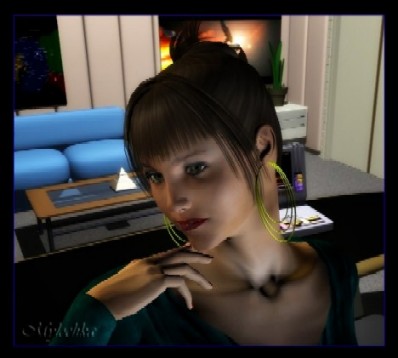 He was everything I wasn't looking for; stable, dependable, with great future prospects and strong enough to manage my bullshit. My father would have loved him - far better than he ever loved me. I was supposed to be a son you know - someone to take over the family business. My father has a lot of old-fashioned Jewish ideas about the place of females - and I think he blames me for my mother's death. Like it was my fault she got xenopolycythemia. I suppose it was my fault that I didn't instantly transform into the dutiful Jewish daughter afterwards, but that's not how she raised me. And I was only six at the time, so...
Anyway, we can deal with my relationship with my father in some other incriminatingly personal recording. I was talking about David.
I tried, for a while, to be what I thought he would want in a girlfriend - devoted, caring, proper, unassuming. And he'd start to warm - then we'd see each other up at the Clave or at one of Cal-the-Sick-Fuck's parties and he'd be reminded of what I'm really like and the next time we saw each other he'd just reek of disdain. Sure, I was fine to use for his sexual needs, but out of bed I was so totally beneath him...
And you know the really funny thing? He never saw it. He never realized that he treated me like dirt. Even now, we're still 'friends.' Of course, I'm not one to dissuade him from that notion. Valley says I have a sick need to stay connected to him, even though it hurts. Maybe she's right. After all, he's getting married - to the daughter of the CEO of the company he works for, no less. A nice shiksa named Catherine Cameron. I'll bet she's blonde and blue-eyed with a perky little nose and no accent and just adores quaint Jewish customs. A pox on her!
So David's getting married and even though I'm in love with Pavel, it depresses me. Maybe that means I'm not really in love - or, at least, not the way I should be. Maybe that means I don't really know what being in love means. I turned myself inside out for David, and I won't give an inch for Pavel. I can understand being reactionary - after all, I turned myself inside out for David, SO I won't give an inch for Pavel. Or maybe it's just that Pavel hasn't made any real moves toward the kind of commitment that proves he loves me.
And THAT thought just sent a galaxy-class starship of panic through me. What if I don't have it in me? What if I can't compromise like all the books say married people are supposed to? What if Pavel wants a dutiful Jewish wife? What if Pavel wants what I could never give my father, what David never accepted...
Oy geveult, enough! Psychoanalysis is for psychoanalysts. Chemistry is for chemists, and I think I need a good hit of Haven chemistry.
Erase recording.