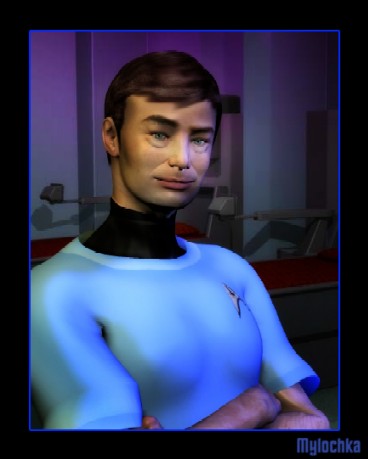 Leonard Samuel McCoy was born in Atlanta, Georgia, North American Continent, Terra, Sol-Jupiter system, in the year 2205, in the month of July, making him Cancerian. Raised to be a genteel Southern gentleman, he met and married Suzanne St. James as a medical intern and has a daughter, Joanna, from that marriage. He and Suzanne were divorced shortly after Joanna’s birth, and he never talks about his ex-wife. He was, however, a good and devoted – if somewhat absent – father.

As a doctor, he had a private practice in Georgia for many years. McCoy joined Starfleet in the year 2238 at the age of 33, replacing Dr. Mark Piper as Chief Medical Officer on the Enterprise. There McCoy met the ship’s Science Officer, a half-Vulcan three years his junior, named Spock (see Spock). Somewhat dismayed by the Vulcan’s appearance and demeanor, McCoy began addressing his own discomfort by engaging in half-joking xenophobic banter; which, much to the good doctor’s consternation, was returned with wit and aplomb. It quickly became their mode of interaction, long after both men grew quite fond of one another.

A year later James Kirk (see James T. Kirk) took over command of that ship after the devastating injury to her former captain, Christopher Pike. McCoy soon became fast friends with Jim, who he often refers to as “Jim-boy.” For his part, Jim refers to McCoy as “Bones,” a term taken from the Horatio Hornblower series of books by C.S. Forester.

Despite his gruff and often acerbic manner, McCoy is a deeply caring man. His frustration with the limitations of his own profession have made him a top-notch researcher, even though he often disparages his own abilities with such comments as “I’m only a poor country doctor.” Distrustful of modern technology (especially the transporter) he nevertheless takes full advantage of any advances in medical science.

Trained in psychology, though not full accredited as a counselor, McCoy has his own brand of therapy; usually involving a stiff shot of Saurian brandy and a fatherly (or not-so-fatherly) lecture.

McCoy’s latent xenophobia got another shock when Ruth Valley (see Ruth Valley) came aboard the Enterprise. He at first rejected her empathic healing abilities and engaged in the same kind of name calling as he had with Spock. Like Spock, Ruth gave as good as she got, though unlike the Vulcan, there was nothing calm about her reactions. Eventually, she came to understand that it was McCoy’s own insecurities that were behind his apparent dislike, and with considerable grace, she managed to form a respectful relationship. That relationship blossomed quickly to true and deep affection. McCoy now considers Ruth to be like a daughter to him, and she, in turn, thinks of him as the closest thing she has to a father.

McCoy has a habit of saying, when asked to perform some task outside his normal range of duties, “I’m a doctor, not a fill-in-the-blank.” This has, in fact, become a standing joke among the crew of the Enterprise - a testament to McCoy's influence and popularity