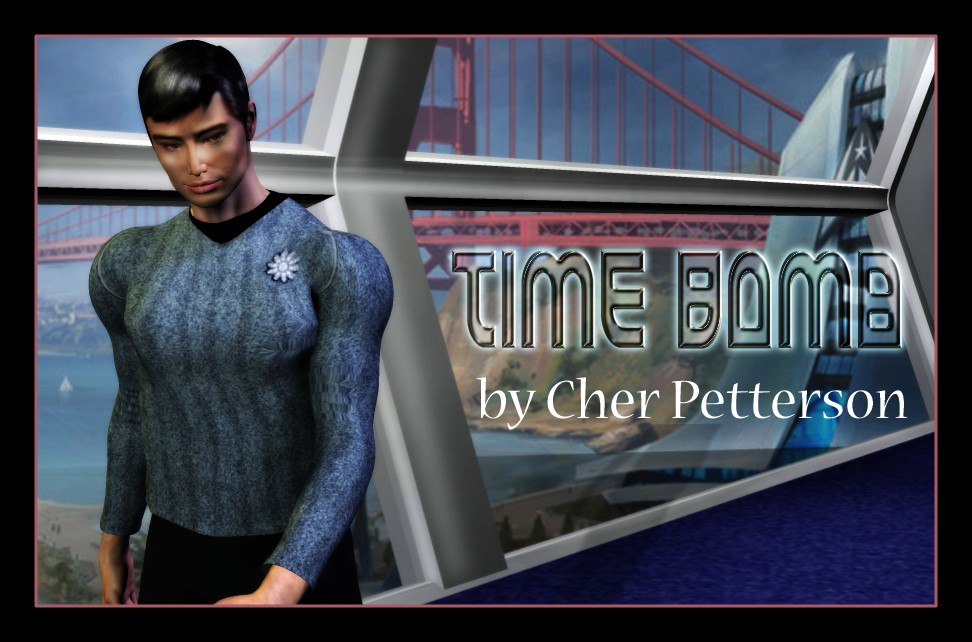 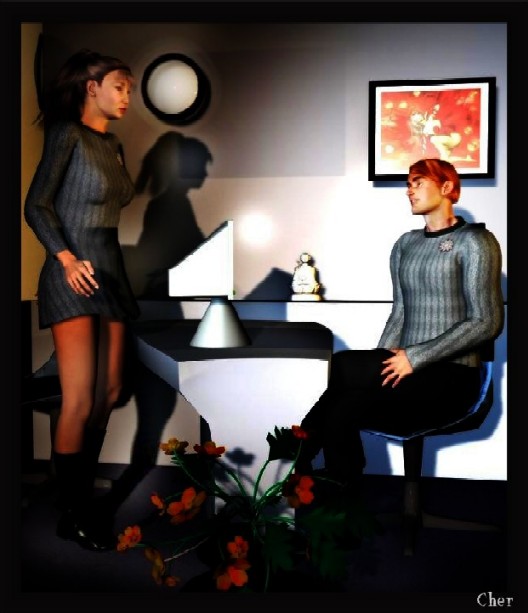 “Oh my God, did you hear?” Sakura Tamura’s voice came with the opening whoosh of the door. Cadet Kevin Riley turned from his small desk, smiling at the pretty Asian woman.

“Hear what, darlin’? he asked

Sakura stopped just inside the door. “Is Sulu here?” she said, glancing swiftly around the small room.

The young woman looked decidedly uncomfortable. She fidgeted for a moment, then said, “Shit, I have class. Can you give him a message for me?”

“Sure, Sakura,” Riley replied, starting to rise. “What’s wrong? What’s happened? Did somebody get booted?”

“No, nothing like that,” she said. She paused, then took a deep breath. “Listen carefully, Riley,” she said. “Just tell him that the Hunter’s been arrested. Tell him it was Cal. He’ll understand.”

“He’ll know,” Sakura said cryptically. She turned back to the door. “Oh, and Kevin? Tell him I’m home by twenty hundred if he wants to talk.”

“The Hunter’s been arrested, it was Cal,” Kevin confirmed, nodding. “Will do.” After Tamura left, he shook his head, then shrugged and went back to his studying.

Sulu strode through the corridors of Starfleet Academy, careful not to look either too rushed or too relaxed. It was a given that Upperclassmen could and would pounce on any excuse to detain and verbally torment the lower-ranked cadets, although that was usually reserved for the First Years. Now that he was near the end of his second year, it was less likely – but there was the annoying truth that there were those who wanted to get their final licks in before he himself joined the ranks of Upperclassmen. It was difficult not to rush just the same. He had a very promising appointment with a very handsome Ensign who was substituting in one of his martial arts classes. He glanced at the chronometer at the end of the corridor, just above the lift. He had just enough time for a shower and a change into civies before meeting Assid in the gym.

He made it to his quarters without incident, and smiled to himself, starting to pull off his tunic even before the door closed behind him. “Hey, Kev, don’t wait up for me…” he began.

“Sakura stopped by with a message,” his roommate, Kevin Riley interrupted in. “She seemed to think it was important, and, from her attitude, not good news.”

Sulu stopped, letting the shirt fall back around his torso. “Bad news?” he said, staring down at the Irishman.

“I don’t know,” Riley returned. “She was pretty specific, but I don’t have a credit of a clue what she meant. But she wasn’t happy about it, that’s for sure.”

“So, spill,” Sulu told him. He watched as Riley took a deep breath, his blue eyes puzzled.

“What she said was, and I quote, tell him that the Hunter’s been arrested. Tell him it was Cal.” 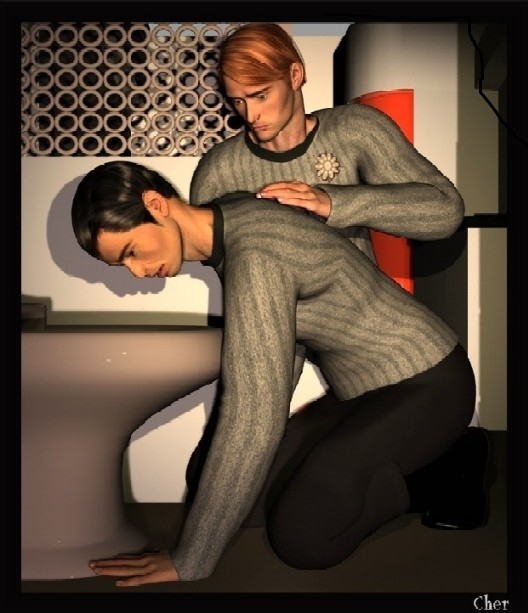 Quite suddenly, the galaxy went spinning away from Sulu’s awareness. The Hunter. Cal. Tell him it was Cal.

Memory swirled around him, disjointed fragments carrying distorted visuals and emotions. The Clave was solid enough, and the Penthouse; the racing, the parties, the groupies, the drugs, the sex… darker images, hallucinogenic in their feel and reality, wild depravity, sadistic perversion, hunger and need and twisted passion, cold manipulation, terror and intimidation, cruel, oppressive… relax, accept, endure… harder, faster, more!

The Hunter was caught, arrested, and it was…

Without a word, Sulu bolted to the head. Everything he’d eaten in the last six hours came rushing out of his stomach, spattering into the chrome bowl. He could hear Kevin’s worried, startled voice, but couldn’t make out what his friend was saying. The roaring of his own blood rushed in his ears, his eyes watered with pain and nausea – and loss. He felt hands at his head and the spasms started again. Over and over he vomited until there was only bile left, and still his body convulsed. The guilt and sorrow beat at him, screaming at him, you knew, gods, you knew! no matter how hard he tried to deny it. He vomited until he was unable to order his muscles to move, unable to do anything but lie, shivering, on the tile floor, his stomach spasming weakly, his head throbbing with remorse and shame and bitter knowledge.

Kevin had called Sakura when Sulu refused to leave the head, refused even to speak. When she arrived, the look in her eyes told him that she had been expecting some kind of horrible adverse reaction – and that she wasn’t about to explain it to him. He told her that he’d be in the library, and left them to the room. It was all he could do.

Sakura’s soft voice penetrated through the storm within him, but he couldn’t make himself acknowledge it. “Nothing’s your fault,” she went on. “You couldn’t’ve known.”

“Hell, ichuuno, none of us could have known,” she soothed, her hand coming to his forehead, gently moving his hair aside.

He winced at the endearment, sweetheart. “I’m not sweet,” he rasped.

She chuckled sympathetically. “After vomiting for an hour, no, I don’t imagine so.” She smiled tenderly. “But you are to me anyway.”

“Sakura…” he began, then stopped as a shudder went through him. “If anyone should’ve suspected…”

“No, lover, not even you. Especially not you,” she continued. “No one thinks of the person they’re sleeping with as a cold-blooded monster.” 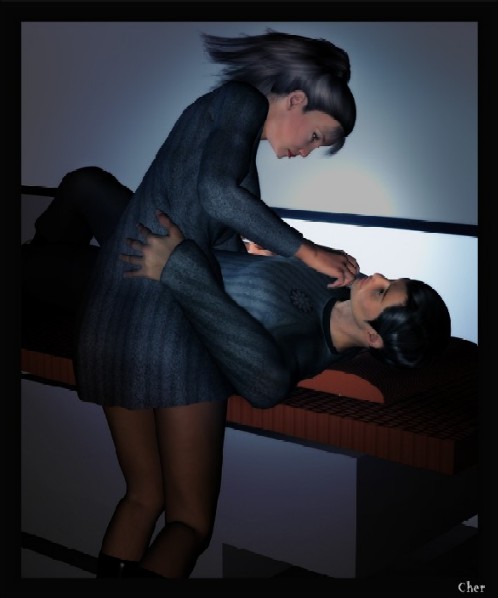 He managed to gaze up at her, his anguished eyes meeting hers. How can you say a thing like that to me?

Somehow, she must have known what he was thinking, for she answered him. “You’re not cold, Sulu-chan, and you’re not a monster. A little perversion is good for the soul, neh?”

“A little, maybe,” he replied bitterly.

“And even more than a little doesn’t make the kind of horror the Hunter was. You had nothing to do with that, Sulu. Nothing.”

She sighed. “I know. But it’s true, whether or not you believe it.” She stood, helping him to his feet. He was too weak to stand, and stumbled against her. “Come on, let’s get you to bed.”

With sudden clarity, Sulu remembered his date with Assid Hallaz. He groaned. “Oh, shit, Sakura, I was supposed to meet someone…”

“Tell me who and I’ll call and let them know you were taken violently ill,” she returned. “You can explain later.”

He nodded wearily, grateful for her understanding and her strength. He let her put him to bed, let her go to the com to call Assid, but when she turned back to him, he grasped her hand. “Stay with me?” he asked.

She smiled, nodding. “Like I’d let you ride this out alone, Kamikaze,” she murmured, and slipped into the small bed beside him.

“I don’t know what I’d do without you, Gypsy,” Sulu told her.

“Me neither,” she rejoined, then laughed softly. “Get some rest, ichuuno.”

In the morning, Sulu explained to Kevin about racing and the Hunter and who Ruis Calvario was. Kevin had heard the name and whistled, simultaneously impressed and horrified. But Sulu left out the details of his association with Cal, and resolved never to think of the man – monster… lover – again.