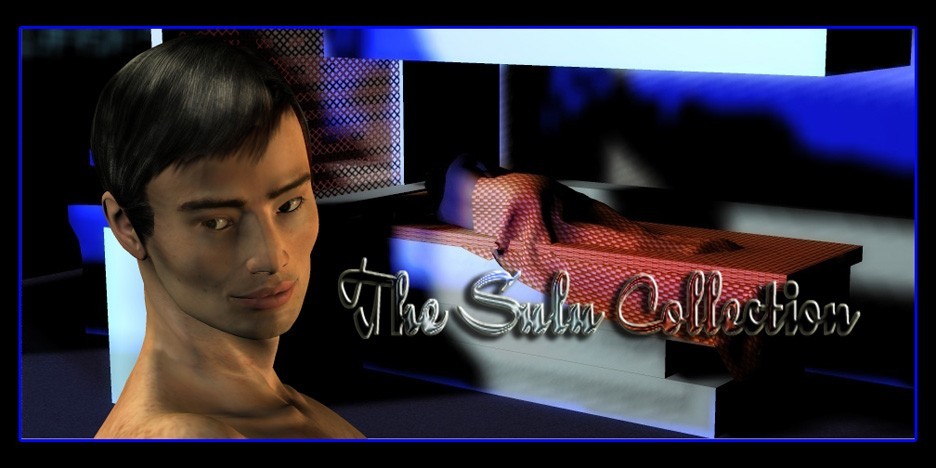 Author's note: When Sulu first arrived at the Academy, his roommate decided, based on Sulu's more than promiscuous nature, that it was Sulu's intent to sleep with at least one member of every non-Human species in the Federation. He termed this quest "the Sulu Collection." It started as a joke. Honest it did.

Cadet Takeda Sulu took one more glance at the chronometer. 0130. He switched off the reader and got up from the study cubicle. Sorry, Marc, I've got a 0700 class, he thought, half amused, half annoyed. He left the hall, striding casually across the open mall that separated it from the cadet quarters. The air was spring fresh, and Sulu had to consciously remember that it was all artificial, even the gently glowing quarter moon. Starfleet Academy was part of the huge station which also housed Starfleet Headquarters. Its day/night, weekly, monthly, and yearly cycles were all attuned to Terra. It was a bit ethnocentrist on the part of Humans, but then Starfleet was Human-dominated. That wasn't by chance, exactly. Most Federation members were happy to let the Terrans do the fighting and dying, either for ethical reasons like the Vulcans, or for purely practical reasons. And any military organization had to have norms and standards, so why not use Terran ones?

Sulu shrugged. Personally, he thought the Academy should prepare one for alien environments - but then, that was only necessary for ship duty. Of course, he was expecting ship duty.

Getting cocky, are you?

No, and that's one of my problems.

He shook his head. His roommate, Marc Strubing and Marc's Cygnian lover, Tali were playing hell with his social/sexual life, whether they were fighting or fucking. One, and Tali became a constant companion, needing his comfort and understanding; the other, and his own quarters were off limits. It was the other tonight, since before dinner. Which is why it was 0135 and he had still been in a study cubicle. He understood, and didn't really mind all that much, but still...

He entered the cadets wing, took the lift to his floor, and walked the 100 meters to his door. He lifted his hand to the lockplate and the door flew open in his face.

Tali-Chan rolled angrily away from Marc's arms, her deep sapphire hair spraying like a blue flame over her pale purple skin. "Really?" she snarled. "Then who?"

"Who the hell do you run to whenever..."

"Whenever you decide you want me out of your life?" Tali shrieked. "Sulu's never touched me!"

Tali's velvet blue eyes flashed angrily as she stormed up from the bed. "For your information, he almost always defends you, you son-of-a-bitch!" she snapped. "If I thought I had a chance with him do you think for one minute I'd stay with an arrogant, self-important, greedy, selfish, half-cocked bastard like you?!"

Marc was on his feet, tearing into his clothes. "Then you just stay here and wait for him, baby!" He strode to the door, turning back as it opened. "On your back with your legs spread and maybe you can convince him!"

"Fuck off, collector!" Marc hissed, and Tali shrieked an insult as the door closed between Sulu and Marc's retreating form.

"Strubing's not happy," Sulu remarked mildly. "And you should get dressed." 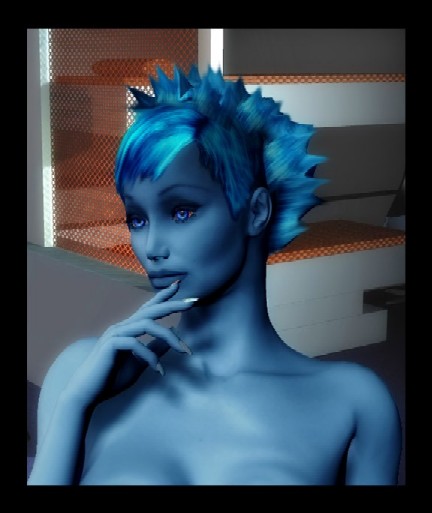 "Tali, you'll work it out. You always do." Sulu crossed the room, reaching into his wardrobe, throwing a robe at her. She caught it and slipped it on, but didn't belt it. She watched as he stretched, collapsing wearily on his bed. "I don't mean to sound callous," he went on, "but I've got an early class and I'm beat. If you want to wait for Marc..."

"I'm through waiting for Marc, Sulu. I've had enough of his arrogance and double standards."

Sulu sat up. "Again, Tali?" he questioned, his features displaying the cynicism evident in his voice.

She turned, hiding the sudden tears. Was this another ploy? And what was she playing for? She'd used Sulu to keep Marc in line, but it hadn't worked. She'd only begun to compare Marc's harsh overconfidence with with Sulu's self-effacing concern - and resent it. She started fights now, almost deliberately. She stubbornly made her estrangements last until the last possible moment before risking losing Marc for good. Why? So she could spend as much time with Sulu's compassion and sympathy as possible? And now she had a chance, to end it with Marc, to try for something good and real with Sulu, and she stood weeping... For Marc?

No! the answer came vehemently. Because Sulu's no fool and he knows you've been playing him and he's not about to get tangled up with a Cygnian siren!

She furiously tossed her hair from her eyes, belting the robe tightly around her ample, rounded body. "No, Sulu. This time I'm serious," she said, and turned to face him.

He was frowning, but it quickly faded. "You are," he said, and the cynicism left his eyes, replaced by gentle chagrin. He got up from the bed. "Can I help?" he asked. "Do you want to talk?"

"No, there's nothing you can do," she replied. "Marc and I destroyed whatever was good between us, and we put you in the middle... I put you..." The tears came again. "Sulu, I'm so sorry..."

He stepped toward her, taking her in a tender embrace. "No need, Tali," he murmured. "I'm sorry it didn't work out."

She began laughing, the tears sliding down her cheeks. "And here I was, worried about having taken advantage of you."

"You can't take advantage of someone who's willing to be taken," he returned.

"Has anyone ever told you you're a jewel?"

His eyes darkened for a moment, then he said, "Yeah," and his voice became sensually teasing. "And a lot of other things."

Tali's smile turned seductive. "Now that Marc's out of the picture, Sulu...." She began.

He hesitated. "Are you sure it's for good this time?"

Tali bristled, a little annoyed that he wasn't more eager. "What difference does it..."

"Because I don't screw my friends," he said angrily. "I don't need that kind of hassle." He took a few steps away from her, toward the door. "When you're sure, then we can see about..."

She swore silently and crossed the space he had put between them. "Don't you want me, Sulu?" she breathed. His jaw tightened, his eyes again full of cynicism.

"Make up your mind, Tali. You and Marc decided on monogamy. That's not my thing, but you can't have it both ways. I've told you that all along. If you want me, fine, but not when you're attached to someone else. I may not be interested in any long-term relationships, but I don't care to be a port in the storm either." He took a breath. "You're beautiful, you're desirable - I'd have to be blind not to have noticed. But I'm not an animal and I don't go wild with uncontrollable lust so you can save that act, too." He walked back to his bed, settling himself on it. "So wait, or don't, but make the choice."

Tali had become nearly insensate with rage as Sulu'd been speaking, but she forced herself to listen, to really hear him. He's right, she told herself. For once in your life, stop playing games, because he's not going to play them with you. Do you want him?

Then give up Marc.

But Marc's a future, security. He wants base duty, not ship. He'll be stable -

But Sulu won't be. No long-term relationships.

Do you really want Marc?

Do you want Sulu, even if it'll only be a casual, temporary, occasional thing?

Then start playing it honest. That's the only game he knows.

She stared down at him and waited until he glanced up at her. Then she smiled, open and genuine, and undid the belt of the robe. It fell open and she shrugged it from her shoulders so it rustled to the floor. "I've made the choice, Sulu," she said. "If Marc wants to give it one last try, things may change. But I'm not going after him. I'm not waiting for him. I'm done."

His dark eyes hesitated. "No strings, Tali," he cautioned.

She shook her head. "No strings," she whispered, and shivered with longing and triumph as he pulled her down onto the bed.

"Did I live up to your expectations?" Sulu murmured lightly.

Tali laughed and snuggled closer to his chest. Yes, Cadet Sulu, you certainly did. She hadn't really believed all the stories about Sulu's expertise. She'd found them intriguing, which was the main reason she'd been so obsessed with him. But she had been sure they were exaggerations. Not any more.

It was odd. It wasn't that he had any special or unusual technique. There was nothing extraordinary about him as far as size or power or stamina were concerned - well, all right, definite points for stamina. But he'd left her feeling profoundly special. He seemed to truly care about her, about her pleasure, almost more than he did his own. She giggled. Maybe he was one of those geishas he'd told her about. No, they're female. "Do they have male geishas?" she wondered aloud.

Sulu opened sleepy eyes. "Yeah, they're called geinin. Go to sleep, Tali." She sighed and kissed him, and he started to laugh.

"My kisses are funny?" she demanded, a little irritably.

"Maybe you never considered me dear before?" she suggested. He smiled warmly.

"Then it's appropriate," she stated firmly, and kissed him again. He returned it, and she started running her hands over him. He gently pushed them away.

"And get suspended? Not on your life."

"You're welcome. Go to sleep."

She had to laugh when, with a casual sigh, Sulu said, "Yeah, I know."