"Okay," Daphne Gollub kissed her new lover on the nose. "Now it's storytime."

Pavel Chekov made a noise that was halfway between a laugh and a groan. "I thought we might just go to sleep."

"Then you thought wrong." They were together making the most of the hours left before Pavel's cabinmate went off duty. Gollub rolled off him and settled into a comfortable position curled at his side. "The topic is ‘Virginity: How You Lost Yours'."

The navigator rolled his eyes wearily. "I thought you knew everything about me."

"Actually," she admitted, drawing a lazy circle on his chest. "I've only been able to narrow it down to two candidates."

"One of two different women," Gollub clarified. "Not two women at once... which would have surprised me."

"Not as much as it would have surprised me," Chekov assured her.

"I know it happened while you were at the Academy. First or possibly second year. Our first suspect was one of your instructors.."

"One of my instructors?" the navigator repeated incredulously.

"Actually she was just the supervisor for the basic Astronavigation lab – and, yes, I do see it as perhaps sadly significant that you wound up in Astronavigation – and although technically lab supervisor isn't an instructor position, it does count as one gossip-wise. And speaking of scandal, she was married, too. A zaftig woman with fake blonde hair and fake boobs the size of a baby's head."

"She wasn't married," Chekov objected. "She was divorced."

"Oh, yes. That's right," the navigator admitted after re-consulting his memory. "But she and I were only friends. Anything else was a rumor."

"Uh-huh," Gollub agreed disbelievingly and waited for her lover to hang himself.

"She was naturally blonde." After a moment, Chekov could no longer resist coming to the defense of his old crush. "and... normally proportioned."

The navigator shrugged. "I wouldn't know."

"Her breasts were real." Chekov winced as soon as he heard the words coming out of his mouth.

"So," Gollub concluded triumphantly, "you did touch them."

"Dafshka," the navigator began before his paramour could lure him into any further admissions. "If you know this much, then you know that this lady is still an officer in Starfleet."

"And is now reconciled to her husband, who is also a Starfleet officer."

"A jealous and vindictive Starfleet captain."

"Yes," the navigator agreed ruefully. "And for these reasons I make it a practice not to speak... or think of that lady..."

"Or her huge, hooker breasts?"

"Or her breasts," Chekov conceded, deciding that this would be a prudent time to devote some attention to the breasts in front of him, "anymore."

"Interesting answer," she said as he began gently kiss and caress her. "Discreet, gentlemanly... And the accompanying nonverbals - although not entirely convincing of your disinterest in all things mammary - do have a certain appeal..." 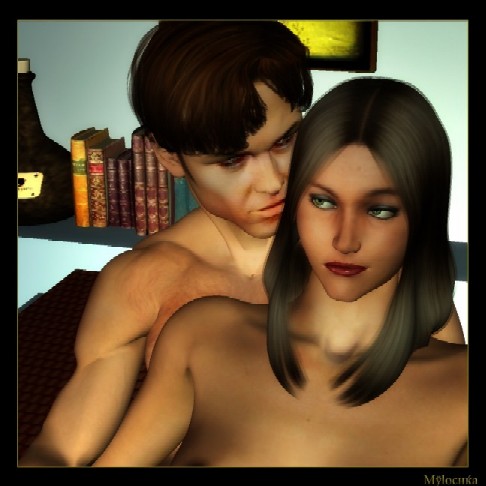 After allowing a few more moments of indulgence, Gollub decided it was time to get back on topic. "This brings us to our second candidate - the psychotic Sevrinite."

Chekov froze mid-caress. He rolled over with a sigh. "Irina."

"It was her," he replied shortly, as if the game had suddenly become not fun for him.

"Oh." Gollub was surprised and disappointed at this serious turn. "Cheer up, bubbee. I mean, yes, she did go all terrorist hippie... And the last time you saw her, she did use, abuse, and indirectly try to kill you along with the rest of the ship... But the two of you had some laughs at first, right?"

The navigator shook his head. "Not really."

"It must not have been," Chekov concluded, his attempt to keep a bitter tone out of his voice failing miserably.

He nodded to the cabin's ceiling.

"Oooh," Gollub winced sympathetically. "That's a blow to the old ego-stick... but you had to think it might go that way. I mean, even though she was your first, you weren't exactly her first..."

The navigator eyed her narrowly. "What makes you say that?"

"I was friends with a few flower-loonies -- pre-Academy -- Even by that time, she'd worked her way through a respectable number of the important Eden-heads. And everyone said that she...." Daphne stopped mid-dish to re-evaluate the look on her lover's face. "Wait, did you think you were her first?"

"No," he replied... regardless of whether he did or not.

"And you know that she eventually did fuck Sevrin," she informed him gently. "Right?"

Gollub marveled at this stunning example of avoidance. De-nial ain't just a river, she could hear Jeremy Paget's voice saying inside her head. "How did the two of you ever get together anyway? I mean, I can't exactly see you running around in a flower-covered loincloth playing bass guitar." But we can! Click here!

"It was at the Academy. I overheard her speaking Russian."

"She's a Muscovite," he replied as if that explained everything.

His lover blinked blankly at him.

"We were both from Moscow," he elaborated, then after a moment of continued blankness from Gollub, added unnecessarily, "That's a city... a rather large city... in Russia."

Chekov rolled his eyes. "It was just something we had in common... an excuse to speak to her. Can't we talk about something else?"

"You want I should tell you about my first time?" Gollub offered, hoping to lighten the mood.

The navigator shrugged. "If you want."

"It was pure mishigas on my part," Daffy admitted. "I was around fourteen... Even then, the budding chemist. I concocted what I thought was cheap home-brewed amber. You know amber, right?"

"On some planets," Gollub conceded. "Anyway, I shared the fruit of my labor with some of my closest friends and it turned out I'd farblondzhet the formula and come up with low-grade venus. You know venus?"

The repetition of the word "illegal" was beginning to wear on Gollub's nerves. "Anyway, we screwed like crazed weasels."

"It was funny at the time."

Daffy narrowed her eyes. Maybe he was too puritan for her. "Not something you'd do, though, is it?"

"I'm not a chemist," he replied easily.

"And not a wild kid out wasting time doing drugs and God knows what else with other wild kids, right?" she asked acidly. "Too busy studying to be the perfect space cadet under the watchful eye of papa and mamushka, weren't you?"

In the following silence, Daphne realized she'd very efficiently backed him into the same sort of corner where she'd pushed so many other lovers. "Why should I say anything?" one boy had frequently complained. "You start the argument and then fuck my side up for me by yourself." There wasn't anything Chekov could say to defend himself at this point that wouldn't come off as a put down of her.

The navigator was silent for another long moment. "Dafshka," he began, at last. "We are who we are. We have done the things we've done...and haven't done " He paused and bushed the hair gently off her forehead. "That's the past. What matters is that we are here..." He kissed the inside of her wrist. "...now..." He kissed her throat. "...together."

They kissed for a long time.

"Jesus, Moscow," she breathed when they finally parted.

"You got it right," she said disbelievingly. "That was the right answer."

Chekov started to kiss her again, then paused. "Are you going to call me ‘Moscow' now?"

"It had to be something," the navigator acceded philosophically, then smiled. "Is there a reward for getting the right answer?"

Gollub grinned and wrapped her arms around him. "You betcha!"