Fait Accompli
(after What Alice Said)

Ruth Valley was annoyed. She was annoyed at herself for agreeing to play at this impromptu concert in Deck Five's Rec Room when she didn't feel like being with people. She was more annoyed to realize that she had done so on the off chance that Spock might have been invited too. She was even more annoyed when she found out he had been invited and declined.

She was annoyed at Sulu for being there and looking as crestfallen and resigned as she hoped she did not. She hoped that Sulu wouldn't feel the need to make a big production out of coming over to make a point of showing that things were fine between them despite what had happened a few nights ago... but was simultaneously annoyed that he hadn't done so yet.

Since she was not allowing herself to dwell on any of these dissatisfactions, a minor item managed to work its way up to the top of her list of piques. By process of elimination, therefore, Ruth Valley was greatly annoyed that Daffy Gollub had gone from a barely perceptible interest in Pavel Chekov to basking in what one didn't have to be a telepath to recognize as post-coital glow. This transition had taken place seemingly without any doubt, difficulty, uncertainty, hesitation ...or even a decent waiting period, for Zehara's sake! At that moment, it seemed, to Lieutenant Valley, supremely unfair. 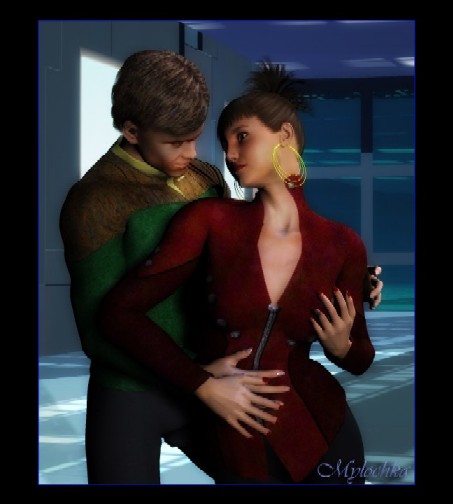 She did not smile at her friend when Daffy managed to disentangle herself for a moment after the last set and wander to where Ruth was packing up her guitar.

"So?" Gollub said, opening the floor to comments.

Ruth gave her friend's new love a cursory once-over as if she hadn't known him for years. Chekov was having an animated conversation across the room with Sulu… thereby further delaying any positive reinforcement the helmsman may have been planning to deliver to her. "Feh," she concluded, closing her guitar case with a double snap.

"Feh?" Gollub repeated. "For my Russian Prince Charming, you have only ‘feh'? What's wrong with him?"

Ruth straightened, crossed her arms and gave the navigator a second look to be fair. "He's short," she pointed out unkindly.

"Some of us are not nine feet tall," Gollub countered good-naturedly.

Gollub smiled. "Not in bed."

Valley squinted at the navigator. "I thought he was just Russian."

"You can be both these days," Gollub confided as if this was the result of a technological breakthrough.

"Your Aunt Miriam will be pleased," Ruth conceded, then scrunched her face up in imitation of that lady. "A niiize Chewish boy..."

"Fucking A," Gollub grinned. "I hadn't thought of it, but I bring home a darling, semi-Yiddish sprintz like him and I could be screwing myself back into her will."

This was getting too positive for Valley's mood. "When he doesn't get his way, he sulks," she warned.

"He's an only child." Daffy shrugged. "I think it comes with the territory."

Being a virtual only child herself, Ruth didn't feel this point was worth further exploration. "Probably a mama's boy."

"Well then he'll be used to having a woman in charge of his life," Gollub concluded. "C'mon, admit it. He's a great guy."

Valley shrugged. "Who said he wasn't?"

"But what you asked," Ruth reminded her, "was what was wrong with him."

"Cow," her friend responded in kind.

Daffy held her arms out. "Glad you're happy for me."

"Yeah," Ruth agreed, giving her a hug. "Or this could have gotten ugly."