Trouble in Paradise
(between A Sordid Affair and Something Old, Something New)

"Flirting?" Chekov repeated. "No. Certainly not. She sat down at this table and we had a cup of coffee together..."

"I'm sure you did." Gollub folded her arms. "You know she just broke up with Geoff Redford, don't you?"

"She mentioned it," the navigator confirmed, seeing no significance to the information. "She seemed upset. That is why I was talking to her."

"I'll bet it was." Gollub replied, seeming more rather than less upset by his statement.

Chekov endured her disapproval for a long moment before asking, "What?"

"When you were at the Academy, do you know what my friends nicknamed you?"

Chekov rested his head against his hands, knowing this couldn't be the beginning of anything good. "I don't suppose there's any possible way I can avoid finding out now." 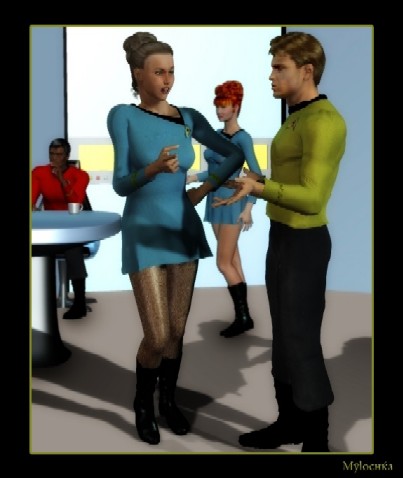 The little noise that the navigator made in response might have warned another person that Chekov was familiar with that soubriquet and did not wish it mentioned.

"And you know why they called you that?" Gollub had no intention of waiting for a response. "Because if a young lady was unceremoniously dumped by arch-bastard Noel DelMonde at least she was always given the opportunity to sleep with his cute Russian roommate."

"That is an extremely unfair characterization..." Chekov began angrily.

"I personally know for a fact that it happened at least three times."

Chekov, who knew the real total and attempts and successes, decided it would be best not to argue numbers. "You know DelMonde. You must know how little it troubled him to leave me in awkward situations with his conquests before, during, and after he..."

"You tracked one girl halfway across the city just so you could deliver the bad news in person."

Chekov frowned, greatly annoyed by this untimely appearance of an inconvenient truth. "None of this has anything to do with..."

"I'm not saying you're a cheater," Daphne said with a false smile, "what I'm saying is you are an opportunist."

"That is extremely unfair and..."

From across the Rec Room, Sulu nodded towards the discussion that had become increasingly audible as he ordered his lunch and carried it over to where the Communications Officer was seated. "What's that all about?"

Uhura looked at the arguing couple and sighed. "Do you remember when we used to say that the best thing for Chekov would be for him to find someone who would call him on all his bullshit instead of just laughing it off like we do?"