THIS vignette by Cheryl Petterson

Martha, My Dear
(before The Percentage)

"Remember when you said we'd have to avoid letting Mensch know about us?"

Pavel Chekov looked up from his borscht at his lover's voice. "I remember it was you who was insistent on that point in the beginning," he returned.

"Whatever," Daffy Gollub said as she took the seat next to him. "I just figured out why."

"You said it had something to do with an Antari cargo freighter shipload of shit being permanently docked outside your cabin," the Russian reminded.

"Didn't you just hear me say 'whatever'?" the chemist demanded, a little irritably.

"Daphne, if you are going to attempt to blame me for something you..."

"Oh, I have enough things to blame you for without inventing new ones, bubelah." Daffy's smile was all teeth, and Pavel sighed.

"Don't play the manyak with me. I was talking about why you don't want my best friend to figure too large in this thing between us that passes for a relationship."

Chekov pushed his bowl away. It was a safe bet that he wasn't going to get to finish it. "Very well. Why don't I want your best friend to figure too prominently in this thing between us that passes for a relationship?" 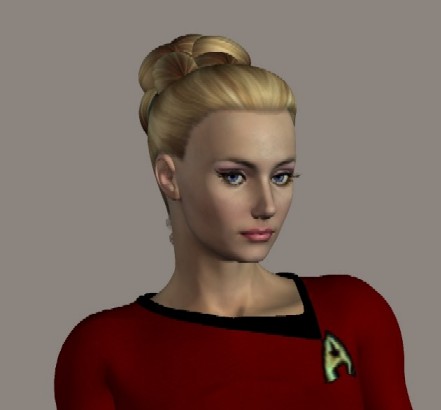 "And don't think that if you pull a Majiir routine her immunity to anything resembling fault will rub off on you."

"Repeating everything I say with a question mark," Daffy growled.

Pavel resisted the urge to question this. Instead, he commented that he hadn't noticed the Indiian engineer's particular affinity for redundant interrogatives.

"Oh, I am so going to smack you," Gollub threatened.

"And this would be uncharacteristic how?" Chekov muttered, and received the expected smack to the back of his head.

"I was talking about the infamous Miss Landon," Daffy reminded.

Pavel stared at his lover, knowing there was absolutely nothing he could say that would not earn him another smack. This had the unfortunate effect of further irritating the chemist.

"Well?" she demanded. The navigator sighed, deciding to go for the clinical.

"She is quite tall, slender, has long blonde hair and unusually large eyes and..." His voice trailed off. "Oh."

"Dafshka, I had honestly never connected her looks to Ruth's."

"Sure you hadn't. That's why you never want to hang around with her."

"I am with you now," Pavel said, confused. "Why would I wish to 'hang around with' Martha..." He winced as Daffy's hand again connected with the back of his head. "Oh. You meant Ruth."

"Didn't want to think about missing those long legs and non-ethnic features and getting to look right into her chest."

"Didn't want me to remember that her you sent love notes and I barely get a 'I'm very fond of you.'"

"I do not and have never compared you to Martha Landon or anyone else," Pavel interrupted firmly. "I do not and have never thought about the fact that Martha resembles Antaris, and even if I had, that would not color my feelings about you or Ruth or your friendship with Ruth. And I have no objections to spending more off-duty time with your friends." He folded his arms and glared belligerently at her. Daffy met his glare and raised him a glower. He raised her an eyebrow. She got red in the face. He frowned. Something twitched at the corner of her lips. He tried not to let his eyes soften. She let out a cough that was surprisingly like a suppressed chuckle. He tilted his head questioningly.

Finally she let out a long breath. "Well, I had to be sure," she said.

"That you weren't harboring any untoward fantasies regarding Mrs. Spock."

He blinked. "Dafshka, you must be joking," he said with alarmed sincerity. Her answering smile was warm and relieved and relenting.

"I am very fond of you Pavel Andrevitch," she murmured, and leaned over, kissing him.

He returned it. "And I of you, my serviceable little pirozhne." 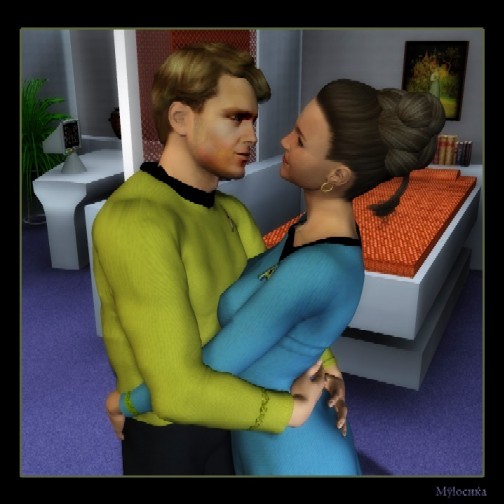