Living Dangerously
(just after D'Artagnan and the Silver Streak)

"What's the best sex you've ever had?"

Chekov groaned and wondered if even mute women found a way to come around to this question. And here he'd been foolishly thinking that they were just going to spend a quiet evening relaxing in his quarters..."Dafshka," he began firmly, "this is precisely the sort of conversation that I have said that I don't wish to..."

"So it's not me then?" she concluded, sitting up on his bunk.

"And that is precisely the sort of reaction that inevitably leads to..."

"Oh, come on. I'm not looking for an excuse to break up."

He raised a dubious eyebrow.

"And don't start the old speech number 243 about how comparisons are meaningless..."

"But they are," the navigator insisted, then added under his breath, "...particularly in this case."

Chekov couldn't stop himself from laughing nervously in the way that he knew she knew always meant he was hiding something. "It is not worth going into, really," he said, nonetheless.

Gollub smiled prettily. "Tell me or I'll strangle you."

The navigator briefly debated whether or not being strangled would be more painful. "I once had a brief relationship with a young woman from Siguria 7..."

"No, no, no. She wasn't a Comfort Girl," Chekov insisted, but under her withering stare had to admit. "She was a Higillian courtesan."

"Not at all. Culturally and historically Higillian courtesans occupy a position of..."

"No," the navigator replied significantly. "I did not."

Gollub was surprised. Higillian courtseans were notoriously cold blooded. There was no corresponding stereotype to match Earth's well-worn myth of the whore with a heart of gold.

"So you were in love?" she said, drawing the other logical conclusion.

"She was very beautiful," he replied, using what was usually shorthand for indicating that he had a huge crush on the woman. "However she had an erratic personality. And I quickly discovered she was involved with me in order to manipulate one of her clients into supplying her with larger living quarters."

"So what's this Higillian have over me? Other than being a prostitute?" 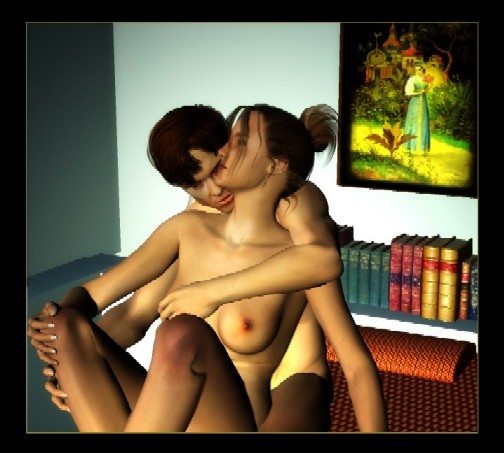 "Fine. She was a prostitute..." Chekov conceded, but couldn't resist adding. "Although in Sigurian culture, the role of..."

"Give the fake pointed ears a rest," Gollub advised. "She was that good?"

"She was a professional courtesan trained from birth in techniques of seduction as well as certain... other... skills... For example, she was able to consciously control the release of pheromones which..."

"Hey, don't Sigurian women have a couple of extra...?"

"...As well as certain other anatomical differences which have been widely documented," he affirmed, as if quickly laying a veneer of scientific detachment on the fact could lower the sleaze factor.

Since there was no denying this, Chekov shrugged.

"You said it was the best sex you ever had."

"It was of the highest professional quality," he replied in his best I-hope-to-God-that-this-is-the-end-of-this-conversation-voice.

"Okay," Daffy said as if she were letting the matter go. She snuggled contentedly against him long enough to lull him into a false sense of security before saying. "So that's what you compare me against?"

"Dafshka," the navigator protested. "I never think of her."

"Bullshit. You said it was the best sex you ever had. And you expect me to believe it never crosses your mind?"

"I never think of her," Chekov said, giving her a reassuring caress, "especially when I'm making love to you."

"Very smooth comeback, Moscow," she replied, then picked up his hand and removed it like it was a dead fish. "A little too smooth."

"Dafshka," the navigator protested. "You don't understand. It was not a sustainable relationship."

"Oh?" Gollub replied acidly. "Do erratic personalities bother you that much?"

Chekov was grateful that there was a part two to his answer. "There was also the physical aspect of the relationship. The two species are not entirely compatible... For the Human male there are risks. There can be damage - sometimes permanent, sometimes fatal - to the heart and... other... vital organs."

Although this wasn't the greatest answer in the universe, it was honest... and a little funny. "So," Gollub replied, biting the corners of her lip so she wouldn't smile. "You had to leave her because screwing her made you fear for your life?"

"In a manner of speaking..." Chekov conceded.

"And yet," she pointed out, snuggling next to him, "you stay with me?"

Chekov put his arms around her and smiled. "I suppose I like to live dangerously."