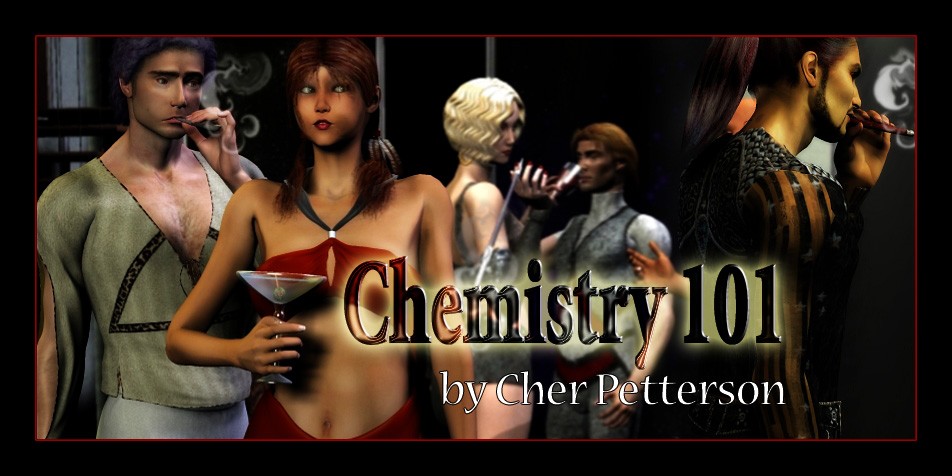 Daffy Gollub choked on her mouthful of gin at the unexpected greeting. It wasn't that the voice was unpleasant - far from it. Nor should she have been particularly surprised - this was, after all, a Clave party. It wasn't even the ever-present urbane, slightly cynical tone. The fact of the matter was that who the voice belonged to always, always spooked her.

She held her breath, hoping that the Haven would just move on, and not actually try to engage her in conversation. For once, luck was with her, and Lane Gage, Dealer Extraordinaire, continued on past her toward a laughing group of Racers.

She swallowed hard, then sighed, taking another long pull of the martini in her hand. Her companion frowned at her.

"What was that all about?" David Maxwell asked.

Daffy raised her eyes, then laughed, waving her hand dismissively. "Nothing, bubee, it just almost went down the wrong way."

"Uh-huh," David said skeptically. He craned his head to gaze past her. "What's your problem with Gage?"

"He wouldn't be able to tell you," the pretty young woman muttered.

Daffy put her fingers to her lips. "Oops. Did I say that out loud? Sorry, Barak, I'm a little tipsy."

David leaned close to her. "You're not," he said firmly, and grasped her upper arm. "Come on, we're going somewhere we can talk."

With an outward shrug - and in inward rush of secret hope and delight - Daffy stumbled after him.

They found a relatively private corner of Cal's kitchen. Daffy hopped up to sit on the counter, with David standing in front of her, guarding both her and their privacy. He lit a joint of Rigellian - to calm her obviously rattled nerves, he said - and they smoked it in silence for a minute. Then Barak bent forward, leaning his hands on the counter on either side of Daffy's thighs.

"All right, now, what's your deal with Gage?" he said.

"I mean what with Havens and deals and all..."

"Says the Jew with the worst sense of humor in the known..."

"Hush, Groupie," Daffy chided, then winced as David's hand slammed down next to her.

"Can't you ever take anything seriously?" he demanded harshly. "I'm trying to help you!"

"I know, Barak, I know," she murmured apologetically. "It's just that - well - this isn't easy to talk about."

David snorted. "You having trouble talking. That's a first."

Daffy's wince this time was completely internal. She bit back her longing, and took a deep breath. "It goes back to when I was first hanging out here."

"How long have you been coming here?" the Racer interrupted.

"Uh - a lot longer than anyone my age should admit to," she confessed, and damned the flush that came to her face.

David eyed her suspiciously. "How did you get invited so young?"

"What, you didn't know I was precocious?"

"Talk to your cousin."

Daffy shrugged, but her heart sank. One more reason for him to hate me, she thought glumly, then sighed, and went on. "Anyway, he brought me up to the Clave and introduced me to - ah - things."

"I can just bet what kinds of 'things'," Barak commented with a sour smile.

"I was already really into chemistry - I got a lab kit for my eleventh birthday - so I was naturally intrigued by all the candy."

David made a disapproving noise, but said nothing.

"So Hawker - that was his handle, his name was Brian - took me over to talk to Gage."

"He wasn't very good," Daffy offered. "Never won one race, as I recall." She smiled at Barak's contemptuous snort. "So he told Gage that I was a budding chemist, which piqued his interest, I guess..."

Daffy closed her eyes, the fragrant smoke wafting all around her, and the memories she never wanted to look at came rushing back.

"Gage, this is my girl. You can just call her Groupie."

Daffy smiled nervously at the tall, handsome Haven. She could tell by the veiled look in his eyes that he hadn't a clue who was doing the introducing, but he smiled politely nonetheless. He took her hand, bending down to kiss the back of it.

"Delighted, Groupie," he said, then returned his attention to Hawker. "And what can I do for you this evening, Racer?"

"Groupie's something of a chemistry whiz, and she's interested in the Haven stuff," Brian replied.

One of Gage's elegant eyebrow rose. "To sample, sell, or analyze?"

"Not so much the selling part," Daffy put in, frowning at Brian, then turned a flirtatious smile on Gage. "Besides, that would be really tacky, now wouldn't it?"

Gage chuckled. "In something of poor taste, yes." He again glanced at her, speculation in the black eyes. "And since I already know the effects of my stock, what, pray tell, would your analyses be used for?"

"Curiosity," she replied. "I'd love to figure how exactly how they react with Terran physiology."

"Hmmm," Gage returned. "Would you be inclined to share whatever information you gather with the Haven Trader's Guild?"

The Haven smiled, placing his arm around her shoulder. "Certainly. "You don't mind excusing us, do you..."

"...Hawker," Gage finished without so much as a hesitation. The Racer looked a little uncertain, but he gave a lop-sided grin.

"Sure, go on. Have a good time, Groupie. Just come find me when you're ready to leave."

After that, Daffy spent a lot of time in Gage's company, most of it on his ship, the Leather. He provided her with an extensive lab set-up and all the samples of the various kinds of Haven drugs she wanted. Within a few weeks, she was more than adept at creating batches from the raw materials, and Gage approvingly pronounced them of almost Haven quality. His flattery - of course - flattered her, and she became better and better at experimenting with dosages and combinations, all the while keeping a detailed record of everything she tried.

It had been the better part of six months, with nearly every weekend spent at the Clave, at Ruis Calvario's parties, or on Leather, when the trouble she would in later years have expected hit.

"You're the chemist. A good chemist is like a good doctor; he never gives his patients something experimental that he hasn't tried on himself."

Daffy was seated on a couch in Gage's office on board his ship. She'd just presented him with the data on a new combination of chemicals, a mixture of a venus and amber, which she'd proudly named "coral." And now Gage, standing over her, was insisting she be the first to take it.

"Uh - venus is really not my thing," she demurred.

"Too bad, Groupie," he returned. He was smiling, his voice as pleasant as always, but his black eyes were cool.

"Look, Gage, I wrote down what the effects should be, isn't that..." 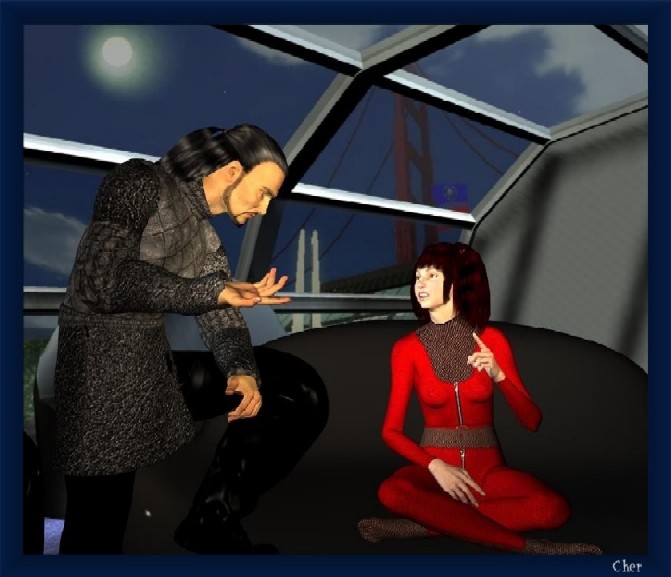 "Should be, sweetheart. It has to be tested." He crouched down so he was at eye level with her. "What's the problem? You aren't exactly a novice."

"Yeah," she conceded uncomfortably. "But my research says this will be a really powerful..."

"All the more reason for the chemist to take the first hit."

"A pity, I'm sure," the Haven sympathized, then grinned. "More for him than you. He wasn't exactly in your league."

"You're well on your way to being designated a Master Chemist, Groupie," Gage pointed out. "If you were to accept employment in any Haven organization, that title would increase your market substantially."

"Age isn't a factor when one has talent like yours."

Gage smiled broadly. "Ah, I see," he said. "Groupie, I'm sure there are any number of Racers or Makers who would be more than happy to provide you with the necessary services."

"And I'm not implying you are," he soothed. He paused, then took her hand. "If it would make you more comfortable - being with someone you know well - I confess I'd be honored to take that role myself."

Daffy jumped up from the couch. "What?" she shrieked.

Gage stood. "Don't be offended, Groupie, I only meant..."

"Oh I know what you meant, you slime!" Daffy shouted. "All this time, you've been so friendly, so obliging... I should have known you'd have ulterior motives!"

"I assure you my motives are anything but..."

The Haven folded his arms, his eyebrows lowering in a glower. "My only interest, Miss Gollub, is in your genuinely superlative chemical knowledge."

"You know my name!?!" Daffy screeched.

Gage's handsome face twisted into a disgusted grimace. "Well, of course I do. Do you think I'd allow this much liberty to a nameless Clavist?"

"Obviously my judgment was more than a little off," he continued. "I do thank you for all the time you've given me, but I think our little arrangement is at an end."

He turned, striding to the comm unit, calling his personal security guard to escort "Groupie" from the ship. Before the large Haven arrived, he turned once again to face her.

"Come back when you've grown up a little, Daphne," he said. "You really are a galaxy-class chemist."

"Looking back on it, I can see I was a little naďve," Daffy admitted with a shrug and a grimace.

"So he didn't actually do anything," David asked.

Her head lowered. "Not as such, no, I guess. Just took advantage of a very young, very talented girl."

"And I was all of thirteen!" she blazed back.

"And he didn't do anything," Barak shot back. 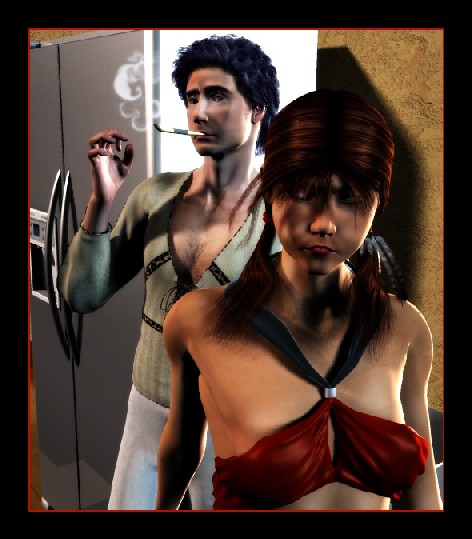 "Oy, god, why did I ever think you'd be sympathetic?"

"You're all farkatke over such a little thing all these years?"

"What, do you think he's just been biding his time, waiting till the right time to jump you?"

"No, you putz, I think he's been biding his time, waiting for the right time to employ me!" she shouted at him.

Several people in the kitchen turned to glance at the two. David straightened up, his eyes widening.

"Well, what would be so bad about that?"

"One, I'm a research chemist, I don't snack on my own data; two, I want to do more for the galaxy than invent new ways for people to get farblondzhet; three, I don't trust Havens, and four..." She glared at him, breathing heavily. "Four is none of your damned business!"

David folded his arms. "So you get all schpilkes every time he looks at you. Talk about chutzpah, Groupie..."

"You talk about it," Daffy quipped, jumping down from the counter and elbowing past him. "I need a drink."

She heard his grumbling as she left the kitchen. It was all she could do to blink back the tears.