It was dark when Jeremy woke. The flame pots Sulu had used for mood-lighting had apparently used up all their oil and gone out. For a moment, the young TerAfrican closed his eyes again, drinking in the fading sensations. He was exhausted, his body more than pleasantly sore. His dominant lover had given him a better-than-usual work-out - which was definitely saying something. His wrists and ankles stung from the abrasions the tight bindings had caused. The small spots where Sulu had dripped hot oil onto his skin were points of glorious suffering. Raised welts from the liberal application of a short, braded whip sang in criss-crossing ecstasy along, thighs, chest, buttocks and back. He could feel the trails of drying sweat along his sides, and the tang of semen lingered in his mouth like the aftertaste of ambrosia.

Groaning softly, he eased his body to the edge of the large bed. Sulu had untied him, which usually meant he was done for the night. Jeremy stumbled on legs weak and trembling, but made it to the small bathroom. He didn't bother turning on the light, preferring to feel his way to the sink and toilet. The cold water he splashed on his face was bracing, and it reminded him that Sulu had slapped him more than once. The discoloration wouldn't show much on his dark skin, but if there were swelling, it might be an awkward thing to have to explain to his parents.

'I got into a fight, Mama,' he could imagine himself saying, and would console himself with the memory of Sulu's hedonistic discipline while his mother yelled at him, and his father preached about the Christian ideal of turning the other cheek.

He knew better than to argue that turning the other cheek was the reason both of his were bruised.

All four of 'em, he chuckled to himself.

He hesitated about taking a shower. After all, if Sulu were to return, he wouldn't be too happy that his slave had cleaned up. Still he wasn't about to put clothes on over the mess, and finally decided that if Sulu was pissed, that wouldn't necessarily be a bad thing.

The hallway outside the Upstairs room was empty and quiet. Jeremy knew from experience that that meant it was close to dawn. Unable to help himself, he listened as he passed the other doors off the hallway. The rooms were either not in use, or those inside asleep or passed out.

Whether it was that quiet, or some trick of fate, as he came to the wide, curving stairs that led to the public areas of Cal's penthouse, he heard Sulu's voice coming from behind the door leading to the old man's private residence. And it wasn't just his voice. Gasping moans and muffled cries, grunts and groans - the sounds of a good, hard fucking.

No. It couldn't be. He had to have some other plaything…

But in Cal's rooms? Why would he do that? Why would the old man let him?

And why're you denyin' the obvious? he asked himself harshly.

But Cal? He's not bi, he's never shown any interest in males!

Pet. The word unaccountably made the young Racer shudder.

With sudden determination, he glanced behind and around him. There was no one in sight. Crouching, he took a small set of electronic tuners from the pocket of his jumpsuit. He'd been carrying them for Cajun; the Maker had abandoned them in the engineering bay of the Clave when he'd been struck by one of his frequent killer headaches. Jeremy selected a few at random, trying different frequencies until he heard the soft hum and click of the door lock opening. 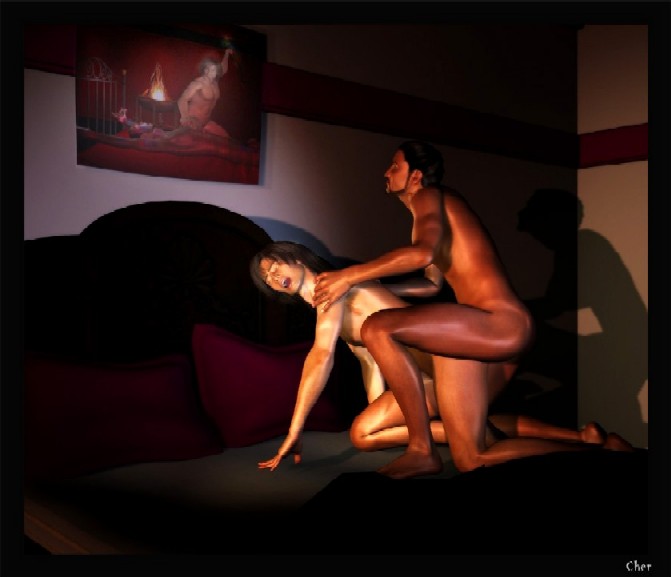 It took several deep breaths and some serious mental fortitude for him to calm his racing heart enough to carefully slide the door open. He stopped it after a few inches, just enough for him to see into the room beyond. The rug was thick and copper-colored. Cathedral windows were flanked by long copper draperies. Mahogany hutches and curios lined the walls. And the erotic, graphic and somehow disturbing vocalizations were coming from a huge bed, a spread of gold, copper, and black brocade pushed to its foot, falling to the floor. Low tables flanked both sides of it, candles covering their surfaces, a large screen on the wall behind the headboard.

Sulu was on his hands and knees on that bed, his head pulled sharply back by his hair, which was wrapped around Calvario's fist, the older man's other hand tightly grasping Sulu's neck. Sulu's wiry, naked, bronzed body was taut, covered in sweat, heaving beneath Cal's assault. Calvario himself wore a robe of white silk, pulled open and away from the violent coupling. Sulu's head was turned toward the door, but his eyes were closed, his face a grimace of the combination of searing eroticism and breathless ferocity Jeremy was himself so familiar with.

It was like happening on the scene of some horrible accident. Jeremy felt his stomach wrenching, but couldn't look away. Cal was hissing at Sulu, telling him over and over to 'give me more!' as he brutalized the young Racer's body. Sulu was crying out, helpless before his body's urgent demands, sobbing and moaning and begging.

When he at last began the litany that always accompanied orgasm, Jeremy couldn't watch any more. He started to let the door slide closed again, when a flicker from the screen above the bed caught his eye. It showed a room lit by blazing oil pots. The floor was littered with clothing and sexual accessories that were obviously well-used. There were two figures in the room, one brutally strapping the other, who was stretched out and tied onto a large, blood-striped bed. Two figures; the bound one had deep, mahogany skin, and the other…

As Jeremy stared, the scene came to a silent, crashing conclusion, the Asian top thrusting his cock into the TerAfrican bottom's mouth.

Then the screen flickered again, and the scene began repeating.

Jeremy blinked, and had to remind himself to breathe. 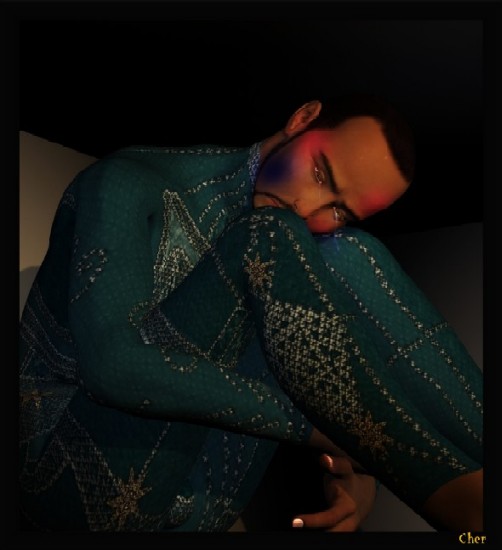 Cal watched while he and Sulu made love - though there were those who wouldn't consider the kind of mutual sex-play they both preferred as 'love.' And with that larger-than-life screen over his head, Sulu had to know about it.

Grief so great it nearly broke him seared into Jeremy's heart. Not only was Sulu Ruis Calvario's lover, not only was he the clear submissive, not only was Calvario a voyeur, getting off on Sulu's dominance of his young lover - but Sulu knew. And Sulu had never bothered to tell Jeremy about it.

Jeremy slumped back against the hallway wall, bending his head almost to his knees, and let the tears of sorrow and betrayal come.

He was still sitting there when the door next to him suddenly hissed open. He heard two quiet footfalls, then the figure who had left Cal's apartments stopped.

He felt the figure kneeling down to him.

"All right," Jeremy croaked. He wiped his tear-stained face on his sleeve. "Yeah, sure, I'm great."

"What are you doing out here?" Sulu asked, and Jeremy noted that he glanced nervously at the door behind him.

The TerAfrican tried an uncertain grin. "Waitin' for you?"

Sulu's hand grasped his upper arm. He stood, bringing Jeremy with him. "Let's go," he said.

"You wanna go back to the room?" Jeremy suggested, but his leer fell flat.

Sulu's eyes narrowed at him. "Yeah, I think that's a real good idea." He pulled Jeremy after him as he strode down the hallway. Once inside the room - with the blood-striped bed, Jeremy couldn't help but add bitterly - Sulu immediately turned, pulling the younger boy into a harsh embrace. Jeremy pushed away.

"No?" Sulu repeated, his voice dangerously soft. "You tell me no?"

"Yeah, I tell you no," Jeremy returned. He stared at Sulu, breathing rapidly, but determined to have it out. "I tell you no until you tell me a few things."

A shadow passed over the Asian face, and Sulu seemed to shudder. "What difference does that make?" he asked.

"Since the first time you fucked me?" Jeremy continued, his tone getting hard. "Was that part of what he showed you about power and pleasure and pain?"

Sulu's tone matched his. "So what if it was?"

Abruptly Sulu turned. "Nothing to tell, Jer," he said, and his voice was heavy with shame and guilt and true, deep regret.

Compassion flooded Jeremy's heart and he stepped forward, gently touching Sulu's shoulder. "Does he force you, babe?" he whispered.

This time he felt the shudder. "Yeah," Sulu snarled. "Just like I force you."

Sulu turned back to face him, his eyes hard and cold. "Like I said," he snapped.

Jeremy closed his eyes, mentally backing off. This was definitely a subject he'd have to explore further, but now was equally definitely not the time or place. He took a deep breath.

"Yeah, okay - but there are other things."

"Other things what?" Sulu growled.

"You let Cal watch us." It came out in a rush, all Jeremy's anguished betrayal spilling out in both words and tears. "You let the goddamned bastard watch us making love! You know how I feel, you know what it means to me, and yeah, I know it's not like that for you. I know you don't feel the way I do. I know it's not sacred and magical and like seein' Jesus for you. But while I'd do anything and everything for you, I'm not some tool for that old man's voyeuristic pleasure, and we're not some fuckin' dirty little peep show, and to let him watch - hell, let him record what we do so he can get his sick-fuck rocks off white he's brutalizing you...Why didn't you tell me, why didn't you tell me?!?" 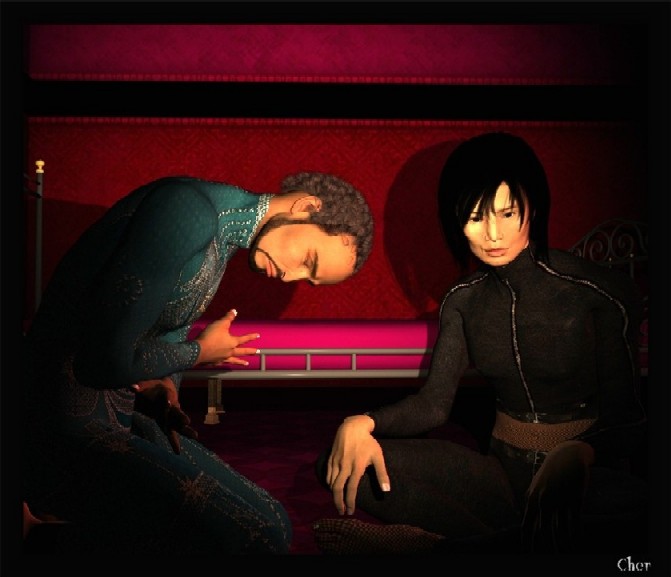 Jeremy's breath came out in pants, his chest heaving, his face once again streaked with his tears. Sulu stared at him, and the look in his dark eyes was aghast, horrified, grieving, bitter, regretful and agonized all at once. He took a step forward, and Jeremy collapsed to his knees.

Sulu sat down in front of him, his legs crossed. "I'm sorry, Jer," was all he said.

"Yeah," Jeremy muttered when he could catch his breath. "Fat lot o' good that does,"

"There is a reason," Sulu put in quietly.

"There's only one problem."

Sudden ice ran through Jeremy's veins, and he stuffed the sensation deep within his own thoughts, as well as the knowledge of something seriously amiss between Sulu and Cal, and vowed to explore it later. But now, right at this moment, the man he loved needed his strength, his understanding, and his acceptance.

He moved forward, squirming his way into Sulu's arms.

"Just tell me you don't do it for him, you don't share with me for his pleasure."

And that was the only answer that mattered.