It was almost silent on the balcony of Ruis Calvario's penthouse apartment. There were several Clavists sleeping in the warm, late-night air, a few talking quietly back inside the plush, darkened living room, a few more in the Upstairs rooms - but for Noel DelMonde, that was almost silence. The remaining noise inside his head was nicely dulled by the fading sapphire still in his system.

He was seated on a cushioned, wrought-iron chair, his long legs stretched out, his bare feet up on the banister of the balcony railing. He had a bottle of beer on the floor next to him, and a forgotten joint of Rigellian burning slowly away to ash in his left hand. There was a light breeze that occasionally stirred his longish dark hair and tickled the soles of his feet. Normally he would have had his eyes closed, but tonight, he was actually enjoying the lights of Rio de Janeiro below and around him. 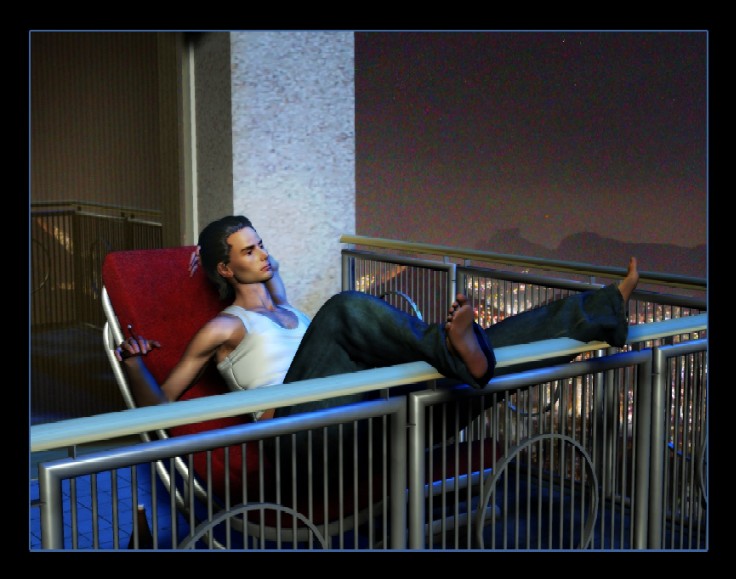 He was aware of the Groupie who was approaching him long before he heard her footsteps or the glass door of the balcony sliding open.

"I thought you were asleep," Daffy Gollub whispered.

He grinned faintly, appreciating her attempt at minimizing the sensory input, though, of course, her words echoed just as loudly in his mind as if she'd shouted.

"And letting good Rigellian go to waste," she commented, taking the half-a-joint from his hand. She took a long hit, then plopped down on the floor beside his chair. "You still grounded, Cajun?"

He heard her sigh. "Yeah. Everybody interesting is sleeping or fucking."

"I love you too, Groupie," Del grumbled.

"Hey, I thought you were asleep, remember?"

"Well, gal, I not sleepin' nor fuckin'..." he paused, glancing down at her. "...which could change any time," he added with a lazy, sensual grin. 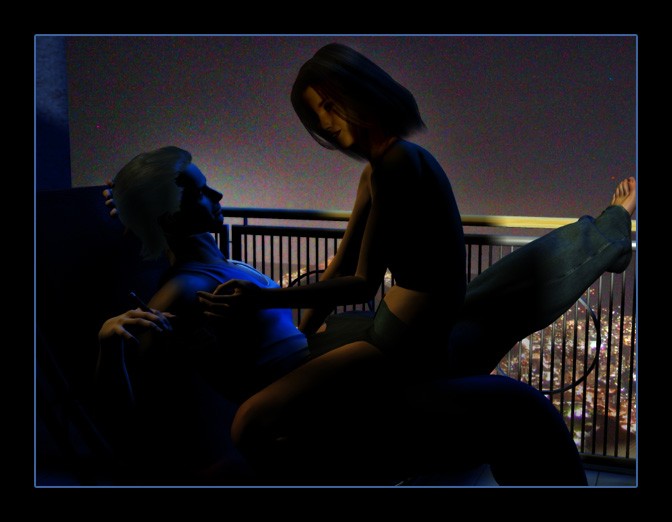 Daffy gave him a wicked smile of her own and climbed up onto the chair, straddling his hips. "There's nothing under this skirt but what God gave me," she hinted. "If you wanna undo those pants of yours..."

Daffy chuckled lasciviously as the appropriate steps were taken to allow his erection to glide smoothly into her moist folds. She moaned and arched her back, her hands moving to his chest as his grasped onto her hips.

Del let his head fall back as the wave of pleasure engulfed him, overriding the vestiges of the Haven drug in his system. When she started grinding against him, he groaned. Her head came forward to his, her lips fastening on his, exhaling a rich hit of the Rigellian into his mouth. They shared the sweet taste, letting it mingle between them, Del finally inhaling it into his lungs. When the kiss broke, Daffy laughed and started rocking on him in earnest.

He closed his eyes, allowing the sensation to surround him, letting go of his sapphire-induced shielding to be able to fully feel her erotic delight. He ignored the always-present image of Barak in her mind, enjoying instead the edge of both need and pain it gave to her emotions. He was aware that other people - normal people, if there were any - would be upset if someone they were fucking was thinking about someone else, but he knew that that was almost universally the case. No one's head was ever completely clear of past relationships or present infatuations, and when he was joined bodily to someone, there was no way he could keep those sorts of things out of his brain. It had long ceased to matter to him. 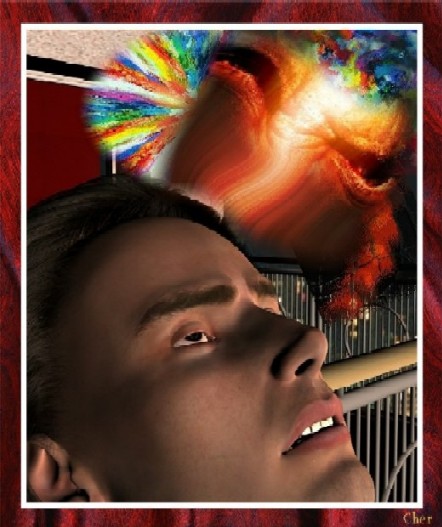 Daffy was moaning, gasping the usual ‘oh god!' and ‘yes!' and ‘do it, fuck me!' kinds of things, and he was reveling in the echoes inside his head, when a bolt of pure hedonistic agony thundered into his mind without warming. He gasped himself, his senses on sudden fire. Kaleidoscopic pictures slammed into his thoughts, too fractured for him to make any coherent sense of. All that was clear were the emotions - pain, fear, anger, need, hunger, terror, rage. The flow was thick and obscene, like honey gone bad, sickeningly sweet and compelling, yet somehow rotting and corrosive. He was aware of other minds, one clawing at the other, the second desperately trying to put up defenses that crumbled in helpless abandon before the onslaught of strength and power directed at it. He felt the domination, that first mind penetrating the second like he himself was penetrating Daffy, forcing compliance, then acceptance, then participation. The second mind altered before his helpless empathic vision, taking in the obdurate flow, feeding from it, becoming it, and Del heard thoughts becoming words, as heavy and as menacing as the emotions.

"Always you must give me more, my Kamikaze - harder, faster, more!"

With a convulsive jerk, Del's entire body spasmed, wrenching orgasm from him. With a roar of anguish, he pushed Daffy from him, tumbling out of the chair, knocking over his beer. He crawled to the farthest corner of the balcony and pulled his knees up to his chest, bending his head to them. He didn't rock or moan. He closed his eyes, squeezing them shut against the thunder in his brain. He was aware that Daffy was cautiously approaching him, her emotions raw and worried.

The feel of her changed, bitter and angry and humiliated. "Fuck you too, bastard!" she spat and he sensed her stalking away from him. He reached into the small pouch clipped to his waistband, digging out a small number of glowing blue capsules. He downed them without counting them, holding his breath until their cerulean salvation began to flow through him. With his fading agony, the sense of presence retreated, the two minds that were nearly three returning to their owners until the only thing that remained was the warm night breeze and the quiet of the balcony - and one truth: Divine Wind.