Vignettes by Cheryl Petterson and Mylochka 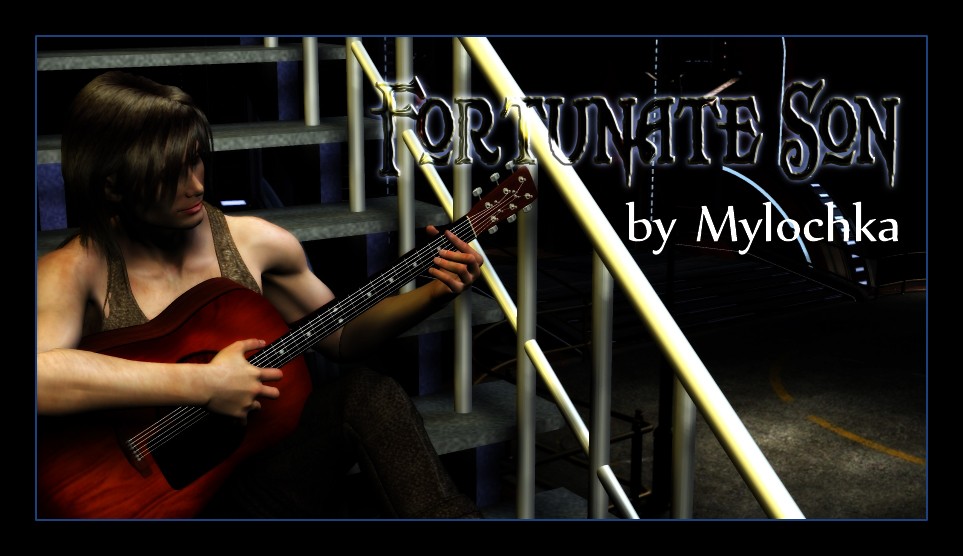 When Daphne Gollub heard music in the upper bay of the Clave's hangar #4, she had a pretty good idea of who was playing. After all Cajun had made it very clear to everyone which parts of the hangar he considered his private property.

"Screw him," she muttered to herself, ordering a bottle of cold beer from the replicator unit in a nearby bulkhead.

The thing she hated about Cajun was that he was a jerk.

"Foul-tempered son of a bitch," she concluded with a glance up at the bay.

On the other hand, the thing she liked about Cajun was that he was devastatingly good looking.

"Jerk," she said, ordering a second bottle of beer.

If he yelled, she decided as she headed for the lift up to the bay, she could always throw it at him.

Despite the mournful sound of the song he was singing, it looked like - for once - the Cajun was in a good mood. She found him sitting on the emergency exit steps leading down from the bay with his feet propped up on the rail, strumming his battered old guitar.

"Hey, cher," he said, giving of one of his rare, gorgeously reckless, lop-sided grins. "So you gonna throw that at me or what?"

"Jerk," Daffy repeated to let him know how enthusiastic she was about this little habit of knowing exactly what you had just been thinking. She did, however, hand him the bottle and take a seat two steps above him. "What's got you so happy?"

"Watch it," she warned for this attempt at ethnic levity. "You finish the overhaul on Loki's ship?"

"Yep." He pointed out the vessel on the bay below them with the bottle. "Ain't that a beautiful t'ing?"

Cajun shook his head. "You live in the motherfuckin' Sistine Chapel o' heartbreakingly beautiful spaceships. How you remain such a philistine?"

Gollub snorted. "Today you even talk like a rich person?"

Daffy narrowed her eyes. "Are you coming on to me?"

"Not at the moment to the best o' my knowledge," he replied. "But fo' future reference - categorically - if you offerin', I up for it." He gave her one of what a friend and fellow Clavist called his patented "panty-remover" smiles. "'Cause you a fine piece o' ass, Miss Daffy Groupie Gollub."

Daffy put a hand on one hip. "When you say things like that, I don't know if you're trying to make a compliment or if I should be hitting you."

"It not a compliment," he said, and then to quickly forestall a smack, he added. "It th' damn honest truth. You wasted on that prick Maxwell."

"Whatever," he replied, taking another sip of his beer before putting it down and playing another chorus of "Jolie Blon" on his guitar.

"So," Gollub asked when he paused for more beer. "How much did you get?"

"Thirty thousand credits," he replied, "An' I probably get a couple thousand more when she figures out some o' the extras I put in."

"Money on top of an agreed on price from a Haven?" Daffy snorted dubiously. "Those must be some extras."

"They are." The Cajun picked up his guitar again.

"So what are you going to do with your new wealth?"

"I not know." The Maker shook his head wonderingly. "An' see, that th' t'ing. Never before have I ever had so much money at one time that I not know what to do wit' it."

Gollub smiled nastily. "Never had more money than you could drink, huh?"

"So young an' yet so cold," the Cajun chided. "You know what I was doin' this time jus' last year?"

"Drinking?" she speculated with purposive rudeness.

"Watch it," he warned, apparently considering "alcoholic" as his ethnicity.

"I was underneath an old widow lady's house fixin' her environmental stabilization unit." He made a face at the memory. "You ever crawled up under a house an' worked fo' eight hours layin' on your back in th' dirt an' muck - where a rat or a cockroach or a spider might decide t' crawl up your leg or onto your cheek - to fix a damn ESU that leakin' God knows whatall on you?"

"An' at th' end o' eight hours, you only get fifty credits 'cause th' old biddie is half deaf an' didn't hear th' price you quoted right an' you can't ask fo' no more 'cause she ain't got no more?"

Daffy considered for a moment. "Don't think I have."

"An' then after you have a meal an' bought a bottle o' bourbon - 'cause you nerves shot from havin' rats an' spiders crawl all over you - you find you too broke to pay fo' somewhere t' sleep that night so you have t' break in to your own house 'cause your daddy's a bastard but you too tired to kill him?"

"My father is a bastard," she pointed out in mock triumph. "And I have broken into our apartment because I didn't have any place to sleep."

"There you go then." Cajun held up his bottle to toast. "Here's to th' charter members of the My Daddy A Rotten Bastard Club."

When he began to play his guitar again, it was a different tune. It was a light, dancing tune that sounded almost Spanish with lots of lilting runs.

"30 thou is a lot of money," she said, after taking another long pull on her bottle of beer. "Not enough to buy a house with or anything..."

On the occasions that he did smile, Daffy noticed that it was almost always with just one side of his mouth - as if it would be too much for his whole face to try to be happy at the same time.

"Buy a house," she replied, trying to make it sound like she didn't care. "Leave."

"I can't stay here forever." Cajun drew in a deep breath, shuddered a little, then shook his head. "Too much strange shit goes on here."

"It can be kind of intense," she acknowledged. "Don't tell me you're getting Fleet Fever."

"A lot of the guys have been talking about trying to get into Starfleet Academy - Cobra, Kam, David... I mean, Barak."

"Doesn't seem likely," she agreed with a rueful grin. "Running off to join the circus I can see us doing, but Fleet? Not so much."

"Yeah." Cajun let the tune on his guitar morph into a parody of military anthem. "Still, you get into th' Academy, you wit' the best people gettin' th' best trainin' fo' Engineerin'... Chemistry too."

Daffy nodded and took another sip of her beer. "Yeah."

"'Less you wanna go train wit' the Havens," he teased, knowing that she had great trepidation about that possibility.

As he played another chorus, his military anthem settled into a rendition that was less of a parody.

"It almost seems a waste not to try with all these ex-Clavists always offering to pull strings for you to help you to get in," Daffy reflected, looking out at the stars gleaming beyond the hangar deck's force shield. "Which wouldn't happen in a million years otherwise. I didn't finish high school. Did you?

"I not sure if I even started."

Gollub let her arms rest on her knees. "Almost makes you feel sorry for the poor schlubs who stayed in school, worked hard, and would kill to get a nod from any of the Retired Royalty who drop in at Cal's almost every week and present their rings and asses to be kissed by us lesser mortals."

"Almos'," Cajun said. "But I ain't never been accused o' hoardin' all the good luck before."

"Mais, we shouldn't worry 'bout it." The Maker switched back over to his dancing tune. "Neither you nor me could get through an hour at th' Academy wit'out tellin' the wrong brass-assed top sergeant t' stick it where th' sun don't shine."

Daffy nodded. "You have a point, sir."

"An' it would cut into our drinkin', dopin', an' fuckin' time somet'ing fierce."

"That could be a problem," she agreed.

He looked at her and then grinned as if reading her thought. "But still..."

"But still, " she said, grudgingly conceding his accuracy. "If we got through the Academy..."

"...then we could choose which corporation was going to ridiculously overpay us..."

"Which, gotta admit, does not sound all that bad."

Cajun sighed, then shook his head. "Ah, who we foolin'?"

"The two of us would definitely fit in better at the circus." Daffy agreed.

The tune on Cajun's guitar had become a pensive lullaby.

Catching a faraway look in his eyes as he looked out over the hangar deck, she decided to play one of his own tricks on him. "But still," she began pointedly.

"But still," he admitted with a rueful grin. "After workin' on these li'l bitty ships, I start to really wanna work on some o' them real big ones." He glanced over at her. "An'..."

"And," she confessed. "All our friends are going to go and it will be crap here without them."

"And with all the elephants, I'm sure they have to travel in really big ships."

"So, it decided." Cajun offered up another toast. "The circus fo' us."

"To the circus." She clinked her bottle against his.

They drank together silently.

When he began to play again, Daffy sighed and propped her chin up on her fist. "But still..."

"All the places you'd go," he said wistfully. "An' the strange an' wonderful stuff that you could see..."

"And all the strange aliens who might try to kill you," she pointed out pessimistically.

"Or give you weird diseases," he conceded.

"It could all be giant spiders, armor-plated roaches, and mutated rats out there."

"So, the circus, definitely."

After a moment of silence, Daffy banged her knuckles against her forehead in frustration. "Oh, we've got to quit talking about this."

"If we don't quit thinking about it, we're going to take the Academy entrance exam just for the hell of it and then end up in a red shirt nose-to-nose with a giant spiderotron wondering 'How the hell did I get here?'"

"Let's talk about something else," she demanded resolutely. "Anything else. Right now."

The Maker strummed his guitar thoughtfully. "What you wanna talk 'bout, darlin'?"

Daffy considered the full range of possibilities for a few moments, then blew out a long breath.

"Or," she suggested practically. "We could just screw."

"Girl." Cajun grinned as he eagerly put aside his guitar. "I thought you was never gonna ask."