Spock had not been awed by anything at Starfleet Headquarters or at the Academy that he had so far seen, although he was well aware there were many residents of the artificial planet who were more than awed by him. A Vulcan entering Starfleet was not an everyday occurrence, especially when that Vulcan was the son of the son of T’Pau, head of the Vulcan Council. He had dismissed the impolite stares, and had gone about the required action of a new cadet; reporting to all proper authorities, receiving his room assignment, and a class schedule, and the Cadet’s Technical Manual. He shared his living quarters, of course; he had expected no special treatment and had received none. His only concern was for his roommate. How well would they arrive at the compromises necessary when a Human attempted to reside with a Vulcan?

When he entered what was to be his home for the next four years, his roommate was not in sight. Spock placed his personal belongings in the space reserved for him, then lay down on his bunk for some calming meditation.

Two hours and thirty-seven minutes later there was still no sign of his roommate, and he got up. The air was much too humid. His skin felt sticky and unclean. He found the bathroom and entered it with the softsoap and towels he had brought with him. He began his bath as he always had, removing his clothes and using the softsoap to remove soil from his body. When he stepped into the shower stall, he expected the short burst of sonics that was meant to remove the residue. 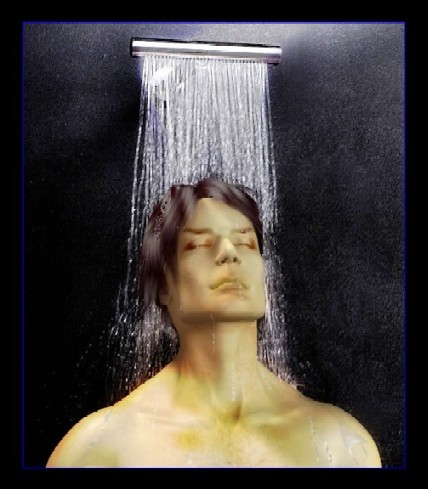 Instead, torrents of water cascaded down at him. It was warm and fresh and it did not stop after a few seconds, or a few minutes. Very quickly the air became more humid, but Spock was not altogether aware of it. The fine, needle-like spray tingled against his skin, invigorating, refreshing, drenching him in warm, liquid luxury. The longer he stayed under that soothing spray, the more delighted he became. Was there no end to the amount of water? It was terribly wasteful, illogically so, yet…. It felt good!

Presently Spock discovered that one could adjust the temperature of the water. Cooler, and the spray became almost piercing. Warmer, and its soothing properties increased dramatically. The heat penetrated his skin, and despite the humidity, he was comfortable for the first time since leaving Vulcan and the life-giving rays of Jensh'hn. He lost track of the time, a disconcerting realization that didn’t make itself known until a voice called from outside of the bathroom, “Hey, are you gonna stay in there all night?” Chastised, Spock reluctantly turned off the miraculous flow of water, and left the shower stall.