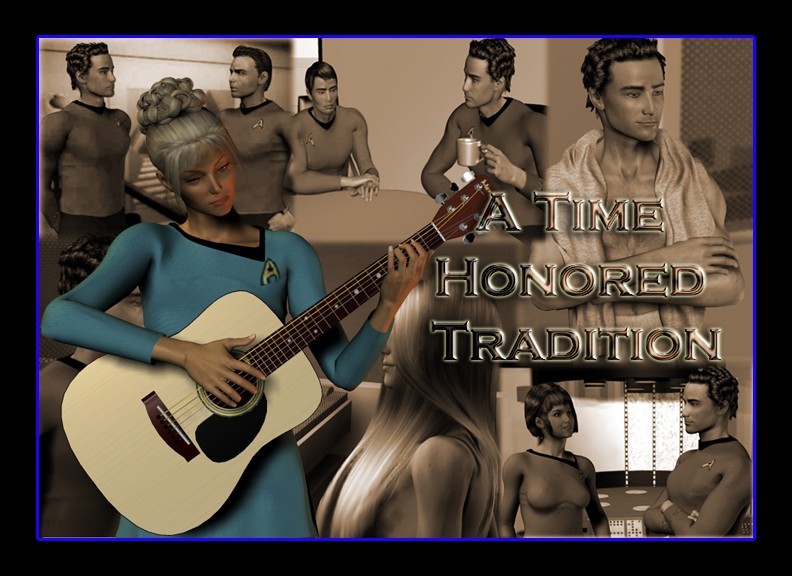 Something large and carnivorous had jumped from a tree and ripped his throat out. The official report for the exploratory party on Delta Carinas logged one dead: Lieutenant John Thompson, Assistant Engineer.

It was an overly loud, overly boisterous party. This sort always was. It had lasted most of a watch already and showed no signs of breaking up. It had begun quietly in Ensign Valleyĺs quarters with a half a dozen people and a toast poured from Lieutenant Commander Scottĺs best bottle. It had moved to the rec room as the inevitable crowd gathered. Anecdotes were told, more bottles opened, stories were shared, and tall tales told and outright lies believed just for the night. There was certainly enough to remember. People came to share and grieve and reminisce. Some wandered away after a time, only to come back later. Some stayed and got drunk. Everyone laughed too loud, their voices too bright, the silences brittle and short-lived.

Sulu kept a wary eye on Ruth. It wasnĺt that this was her first experience with this sort of thing. She was a Clavist, and this was as much a tradition at the Clave as it was in Fleet. But it was her first time as a Fleet officer, maybe the first time sheĺd actually known more about the departed than his or her racing handle. He knew how heĺd felt the first time. Only a few months after heĺd signed aboard the Enterprise, an ensign named Carla Werner had been crushed during an avalanche. Heĺd been standing not five meters away, and survived with no more than a bad sprain and a mild concussion. But it could just as easily have been his life snuffed out by all that rock. And someday, the odds were bound to be against him. Every Fleet officer knew that. Every Fleet officer accepted that. It was why this way of honoring the fallen had come into being, and was chosen more times than not. Far better to celebrate the life rather than the death, to remember the friend and not the shrouded body laying in cold storage down on the lowest deck. He knew that Ruth understood that. But he also knew it had hit him harder in Fleet than it ever had at the Clave. And Jock had been more than a friend, more than a roommate. He knew too well that sex with Ruth, while always casual, was never really nonchalant. And so he watched her, ready, if she needed it, to be a shoulder, a soft voice, or a fevered body.

Ruth accepted another glass of wine, laughed at a joke she hadnĺt heard, then wandered numbly away from the small knot of people sheĺd been standing with. The emotions in the room were enough to slice her raw if she let them. She wouldnĺt, of course. It was not meet for a keheil to absorb this kind of injury. Grief was something no one else could heal, not her, not even Bones. Where was Del when she needed him? Where was Terry? Hell, where was Jock? Another one bites the dust. And another one gone, and another one goneů I know too many old songs. Damn things. And they can stop asking for the guitar because I donĺt want to play.

Let Uhura sing. I canĺt go back to that empty room for it.

So send someone, anyone. Roy would do it.

Roy, where are you?

This is not your funeral, keheil. Ask someone to get your guitar. Jock deserves a song.

Spock moved silently through the crowd, disliking the intimacy and the seeming disrespect this activity showed. It was a deceptive appearance, he well know. The people here were genuinely mourning the loss of a life. Yet it was such an illogical, unseemly way to go about it. The Terran notion of mourning was, in itself, illogical. The activity changed nothing. The Vulcan way was to prepare the home and property for the inevitable change in routine and household. There were rituals to be performed for the return of the essence of the deceased to the Clan. This ľ debauchery ľ made no sense.

He said nothing, of course. Those who mourned Lieutenant Thompsonĺs passing were well aware of their own motivations, and did not need to be contradicted by the beliefs of anotherĺs culture in the midst of their grief. These Ĺpartiesĺ were held out of a long-standing Fleet tradition of respect for the life of the deceased. Despite his personal aversion, and regardless of whether he understood the expression of respect, he attended out of that respect and his duty as First Officer. His intent was to spend an hour or so, then take his leave as unobtrusively as possible.

He noted Mr. Scott in the crowd, red-eyed, but to all appearances jovial. He seemed far older than he had the day before. Spock was aware that he and Mr. Thompson had been close. Scott tended to treat his assistants as sons and daughters. The loss would be particularly grievous for him. The next day, Spock decided, would be soon enough to discuss Thompsonĺs replacement.

Moving deeper into the crowd, he saw Ensign Valley, who had been Thompsonĺs roommate. He was aware that they had also been friends ľ and lovers. A passing thought, that none of the crew really understood that it was the First Officerĺs duty to know as much as possible about the lives of the ship's crew, crossed his mind. Without really meaning to, he approached her, overhearing her agree to provide music for the wake. He also saw, though he did not believe anyone else did, that she was not enthusiastic about the prospect. He believed he understood why. He moved next to her, and asked softly, ôPerhaps you would prefer to use my lyrette?ö Her reaction was one of obvious surprise, both at seeing him and at his offer. But her eyes were grateful.

He nodded. ôI will return in a moment,ö he told her, and turned toward the door. As he reached it, he found himself wondering for the first time in years whether such a party would be held for him. He sincerely hoped not.

His dark eyes studied her, and for a moment she was certain they were seeing way too deeply - as deeply as Terry had, came the unbidden comparison. His expression registered what must have been a sudden change in hers.

"No, I've got to..." she stopped speaking as Spock stepped up to her, handing her his lyrette.

"Lieutenant," Spock returned. "Miss Valley, you may return the instrument to me in the morning."

"You're not staying to hear the song?" Ruth asked, trying not to let the pleading into her eyes or voice.

"I am. However, my duties require my attention soon after."

Ruth stared at him, unable to express her gratitude.

"In the morning, Miss Valley," he repeated, and she couldn't be sure, but she thought she saw his eyes flicker to Sulu. She knew she saw Sulu nod.

Ruth sat down in the chair Sulu had provided for her and was, as expected, immediately surrounded by party-goers. She softly fingered the strings, checking their tuning.

What do I play? How do I capture Jock's essence? He was abrasive and fervent, but genuinely, honestly caring. He was as committed to people as he was to engines, a rarity among engineers. He never shut up. How can I...?

Don't. Don't even try. Play something for how you feel. 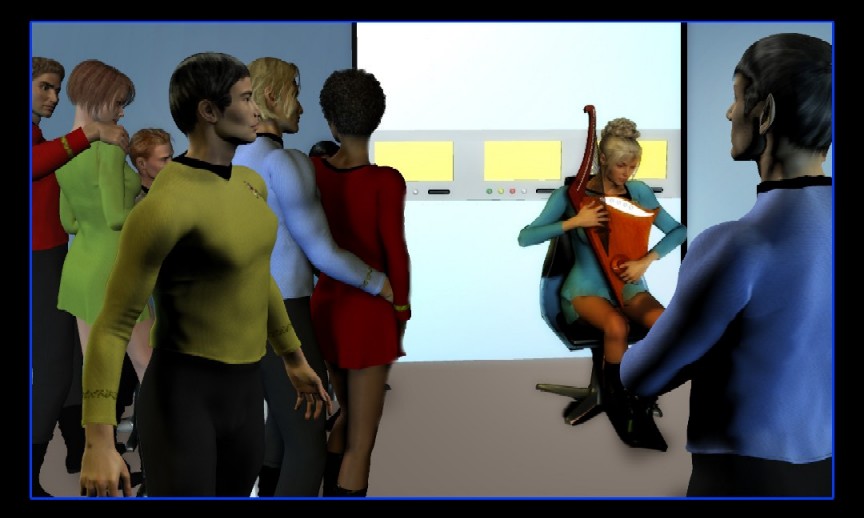 "I close my eyes
Only for a moment, and the moment's gone
All my dreams
Pass before my eyes; a curiosity
Dust in the wind
All they are is dust in the wind

Same old song
Just a drop of water in an endless sea
All we do
Crumbles to the ground, though we refuse to see
Dust in the wind
All we are is dust in the wind,"

She closed her eyes, playing the instrumental bridge, hearing in her mind the memory of a soft, sweet violin.

She didn't hear the applause. she didn't feel the tears streaming down her face. She didn't feel Sulu's arms coming around her, raising her from the chair. He didn't even try to take the lyrette from her until they were in her quarters. He set it almost reverently on Jock's bed, and they chased away the half-empty shadows of the cabin with honest, fervent passion.

Dust In The Wind: lyrics as recorded by Kansas