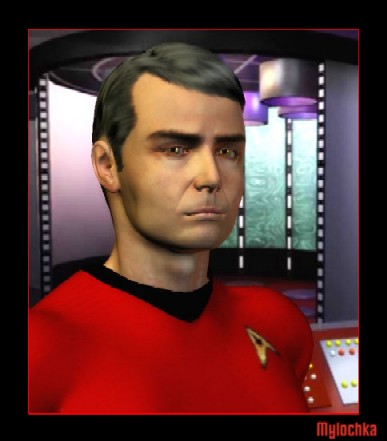 Montgomery Scott was born in the year 2200 in Aberdeen, Scotland, European continent, Terra, Sol-Jupiter system. Showing a very real talent for both theoretical and practical engineering from a very early age, he breezed through both Alterra University and Starfleet Academy, assigned immediately to working starships. In 2235, the second of the new Constitution Class heavy cruisers, the U.S.S. Enterprise was commissioned, and Scott was given the ChiefÆ EngineerÆs post. He remains in that post to this day.

Called ōScottyö by nearly everyone (with the exception of Spock and Jilla ¢ and his subordinates when on duty), Scott is a friendly if somewhat single-minded man. HeÆs very proud of his Scottish heritage and the good scotch that goes with it. He plays the bagpipes, and his dress uniform includes a kilt. HeÆs also very proud of the Enterprise and has been known to get into fistfights with those who insult her. Never having married, Scott thinks of the engines of the ship as his ōwee bairnsö and frets over them like any good parent. Likewise, he tends to take young engineers under his wing, treating them like his children as well

Scotty has had, from time to time, what he would call ōa wee drinkinÆ problem,ö most notably during the first year of SpockÆs captaincy of the Enterprise - also known as the ōCaptain Bastardö year. But even during this stressful time, Scott can proudly say that he was never drunk on duty.

Scotty has a very close relationship with Jilla (see Jilla Majiir), considering himself her surrogate father. He also has an easy friendship with Dr. McCoy and with Jim Kirk, although he tends to keep more of a professional distance between himself and the Captain. Having been on board the Enterprise since her launch, he is also the crewmember who, next to Jade Han (see Jade Han), has known Spock the longest. And whether or not Spock would return it (he does), Scotty has a deep affection for the Vulcan.

Scott was born in early May, making him Taurus. Easy to see the æbullishÆ qualities about him, now, isnÆt it?