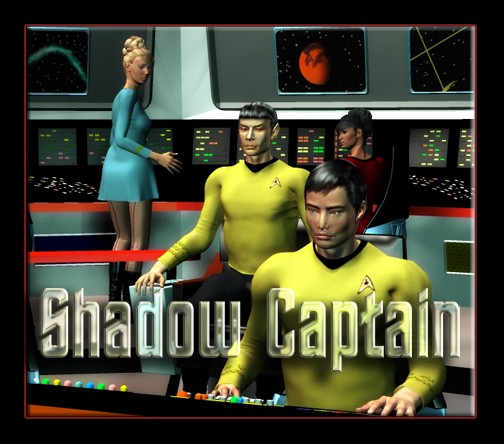 TO WATCH A RELATED VIDEO, CLICK HERE and scroll down to "Old Love"

Usually when a crewmember transferred off the Enterprise, there was at least one party --- unless that individual was leaving under circumstances that were euphemistically referred to as “under a cloud.” Since Noel DelMonde was leaving under a whole metaphorical thunderstorm, no one had been brave or stupid enough to suggest the possibility of any sort of send off. As the engineer stuffed the last of his remaining possessions into a duffle bag, he glared at the only person brave and stupid enough to be in the same room with him today. 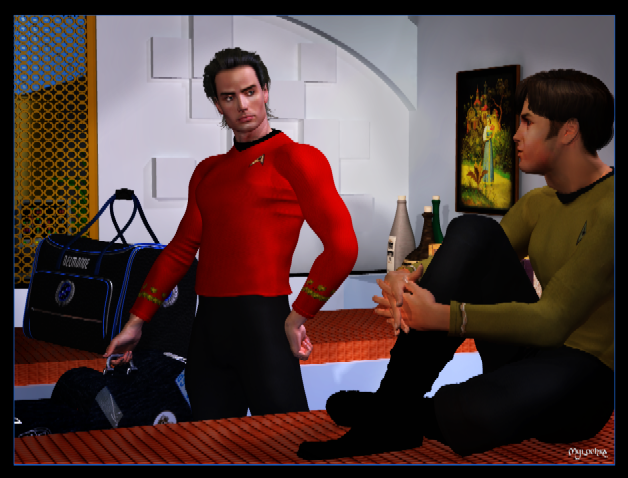 “Don' pretend like you gonna miss me,” he growled as he reached past his roommate to retrieve a New Orleans shot glass.

Chekov at least had brains enough to pretend like he was reading a report. “No doubt I will be aware of your absence.”

The Cajun snorted. “’Til Daf move back in.”

“Oh,” the Russian replied, deadpan. “Did she move out? “ It was the only sort of joke Del could stand at this time -- very bitter, cynical humor. Although Daffy had once more left Chekov "for fucking forever, you fucking schmuck!" she hadn't bothered to collect her possessions that sat on the shelf behind Chekov's bed... nor had the Russian made any effort to move them.

It seemed to DelMonde to be a fitting emblem of what a fucked up mess love was.

"Wait." The navigator reached down below his bunk and retrieved a bottle that he then tossed to the engineer. "Take it." It was the last of Chekov's precious, 150 proof Polish vodka. If Del were able to feel anything, he might have been touched by the gesture.

The Russian shrugged diffidently. "You've drunk most of it anyway."

"I a’goin’ to San Fran, ya dumb fuck," the Cajun replied in kind. "I could be in Poland in a half hour."

"You won't go though," Chekov replied, unfazed. "You never do."

"Why should I? What the fuck in Poland?"

"What more do you want from a people?"

The comm sounded. DelMonde had snapped out, "I headed out the fuckin’ door, Kyle" before he really looked at the face on his monitor screen. 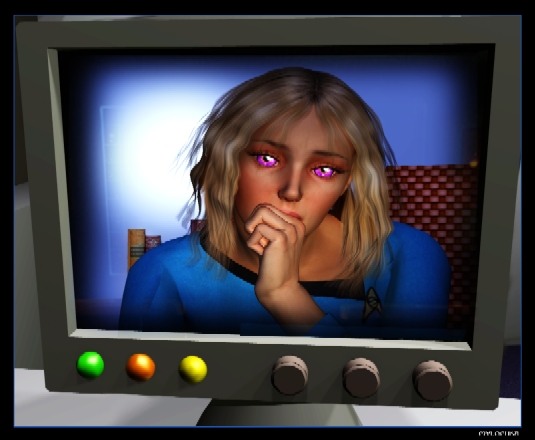 He felt like he'd been hit in the chest by a phaser blast. Just the sound of her voice made him feel like he'd been smashed flat. He stood there dumbly, unable to breathe or move from the sudden force of all the emotion he'd not been able to feel a moment ago.

"Uh..." Chekov said into the uncomfortable silence. "I should go... somewhere."

Del came enough to himself to hit the mute button and reply acidly, "Oh, that real quick, T-Paul. You sure you not developin’ empathic powers?"

"I certainly hope not," the Russian muttered as he rose and headed for the door. He was almost there when he impulsively turned and held out a hand for DelMonde to shake. "Das vydanya, Noel."

DelMonde wavered on the verge of telling him to fuck off for a moment, then pulled his roommate into a hug instead.

"Try not to get killed, ya idiot," he said roughly, pushing the Russian towards the door as he released him.

When the navigator bit off his automatic comeback, Del probed his mind quickly enough to hear that what Chekov had almost said was, "Try not to kill yourself."

The Russian shrugged apologetically. "You know what I mean." 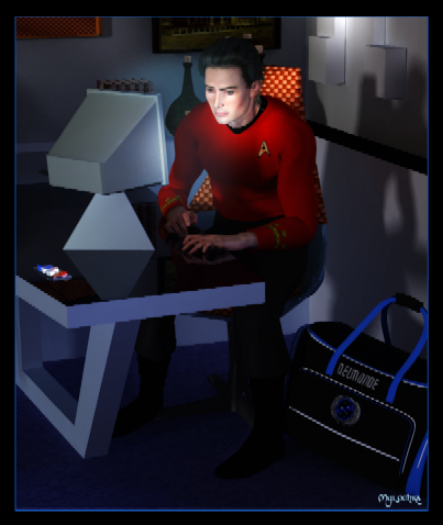 "Much as I want to," Del replied, taking the Russian by the shoulders, turning him, and once more pushing him towards the door. "All right, now get the fuck out."

The navigator retreated obediently, muttering, "It actually is my cabin..."

For a long moment after the door closed behind Chekov, DelMonde contemplating leaving without re-opening the comm link. He knew he didn't have that kind of strength, though.

"Del?" Ruth's voice seemed tiny coming from the speakers. "I just wanted to say...” She paused, apparently not ready to say whatever it was. “I thought this might be better than in person."

"Yeah," he replied shortly, as he slid down into the chair in front of his desk. "If we thought of talkin’ over th' intercom ‘stead of in person before, who know what kind of trouble we might could have avoided."

Ruth took in a deep breath before beginning again with, "Del, I wanted to tell you..."

"You know, I kill him off a hundred times or more," the engineer interrupted abruptly. 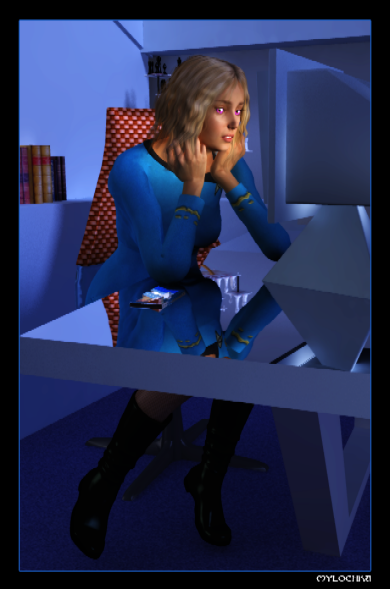 "As soon as I found out you had another man, my mind come up wit' scenarios where one way or the other, he be put out the way," he explained. "Bein’ killed was jus’ one way -- There not no malice to it... Well, not always. It jus' ‘cause he a line officer on active duty... an', frankly, darlin’, pretty accident prone fo' a Vulcan…. So the odds on favorite was bein’ killed off.... Although there many different ways I imagine he might get out the way… My favorites always ones where I picture you wake up one mornin’ an' jus’ suddenly come to your senses."

Del scrubbed at one of his eyes, which had suddenly gotten wet for some reason. "In all that, I never figure he jus' up an’ decide he duty bound to become a bastard… an’ hand you to me… bit by hacked-off bit."

"Spock tried to explain..." she began.

It caused him physical pain to hear her say that name. "An' durin’ the times before that… when it clear that there not no possibility that I ever have you again… when these fantasies come to me, I say to myself, ‘You not want her that way, though, would you? Always knowin’ that you were second best? That you the love she had to settle fo'? You got more pride than that, non?’" 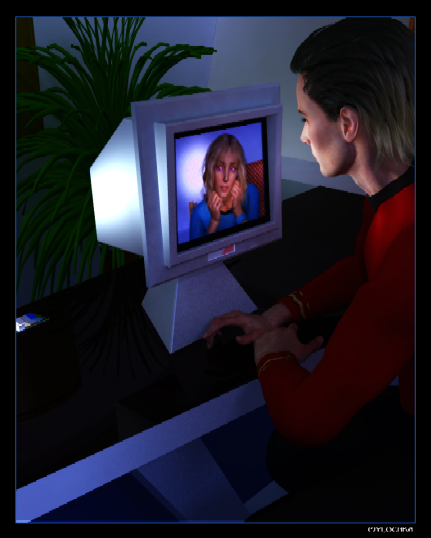 "An’ the funny t'ing is, I didn't. When the moment come, I not have a lick o' pride. Not a scrap. Not an ounce. You an’ your man fucked me over near ever' way I could be fucked over..."

"An’ the really, really funny t'ing is that it all possible 'cause I beg for it. I follow the two o' you on my knees pleadin' fo' every kick in the gut I got… An’ thank the stars fo' the opportunity t' be kicked again..."

"An’ even funnier than that is the fact that I'd do it all again." DelMonde looked directly in to the image of her eyes on the little screen before him. "On Dreamland, when I have powers like a god --when I can have anyt’ing or anyone I want -- all I want was you. Don't you see, babe? If I stay, I not stop tryin' to be wit' you… ever."

"We made it work before."

"That before. An’ this is now. An’ after I held you in my arms again...” The engineer had to swallow to have enough voice to go on. “There jus' no way I can stay knowin' that... rememberin' that..." 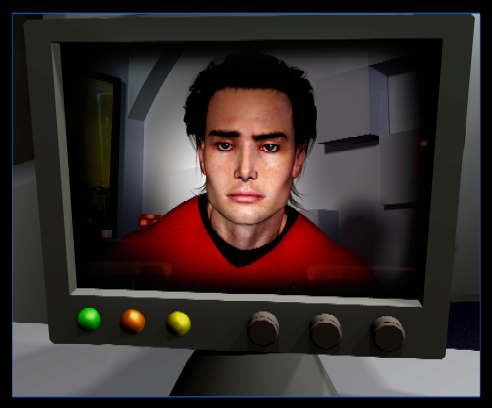 "Not on this ship. Not no more. Don't you see? It not only tearin’ me up inside... I would let it tear up anyt’ing or anyone -- you, your man, this whole ship -- if I t'ink it get me one inch closer to holdin’ you again… This t'ing between us makin’ us all into people we not want to be."

There was silence on the other end of the line.

Ruth replied very quietly. "But I do."

"Not enough, darlin'." He snapped off the comm link and picked up his guitar case. "Too much… but not enough."