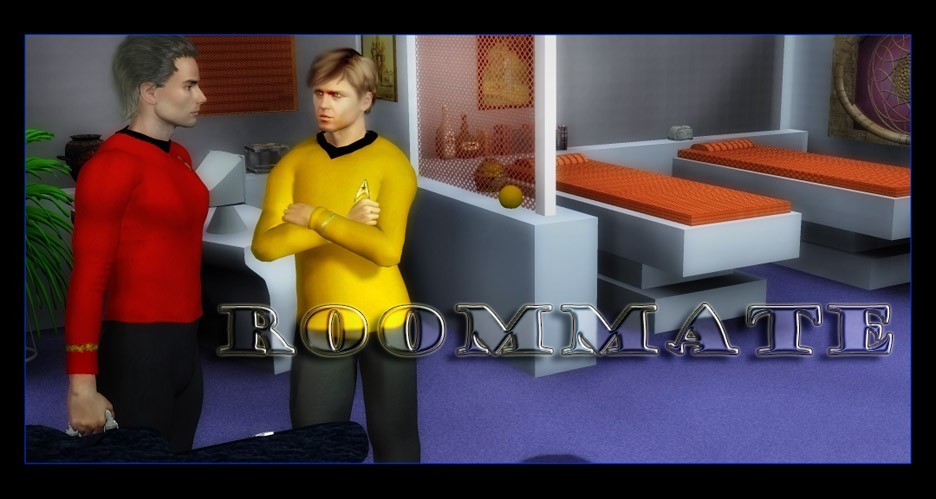 A Vignette
by Cheryl Petterson

Noel DelMonde was humming to himself as he softly fingered the strings of his guitar. It was quiet, nearly the beginning of Third Watch, and most of the rest of the Enterprise’s crew was asleep. He’d been alone all evening, and the normal headache from the day’s activities had left him. Not that his roommate was ever much of a burden in that respect. The Russian’s psi-null state never contributed to the ever-present noise in his brain. Still, it had been very nice to be able to do what he wanted, when he wanted, with no commentary from the dour navigator.

An’ no loud arguin’ wit’ Daffy, he thought almost blissfully, no doubly annoyin’ cuddlin’ ‘til she tell me to get out. None o’ their l’il verbal sparrin’ matches what pass fo’ conversation. He sighed, ready to put the guitar away and actually get a decent night’s sleep.

The cabin door whooshed open and he muttered, “Don’ it jus’ figure.” Pavel Chekov didn’t exactly stumble into the room, but from the slight unsteadiness and the soft grin on the Russian’s face, Del knew his roommate had had quite a bit to drink.

“I goin’ to bed, T-Paul,” he said, fending off any attempt at conversation.

“Don’t expect me to join you, Chekov replied amiably.

“You wanna stay up, stay up,” Del shrugged. He rose, putting his guitar up on the shelf above the beds, then turned down the Fleet-issued bedcover, sliding in between the fresh, crisp sheets.

“She is a wonderful woman,” Chekov said suddenly. “Do you know that, Noel? Truly wonderful.”

“You got yourself laid really good, didn’t ya?” the Cajun guessed – though it wasn’t even close to being one.

The navigator’s smile was so beatific it was unnerving.

“Do you know what her name means?” he asked dreamily.

“It is from the Greek for ‘laurel.’ Do you know what a laurel is?”

“It is an evergreen shrub, a beautiful and magnificent member of the Magnoliopsida Class. It is the source of bay leaves and beautiful pale yellow flowers…” He sighed. “Did you know that daffodils are yellow? Is that not the most marvelous coincidence?”

“In Greek mythology, Daphne was a nymph turned into a laurel tree by her father in order that she might escape the pursuit of Apollo.” Chekov chuckled, actually sitting down on his roommate’s bed. “Imagine that, my Dafshka, pursued by the god of the sun!”

“Oh hell, get the fuck off!” Del groaned, pushing at the Russian with his feet.

Chekov obliged, standing unsteadily next to the engineer’s bed.

“All your name means is Christmas,” he declared, as if this were some great insult.

“It does not!” the navigator blustered.

Chekov blinked down at him. “How do you know Latin?” he questioned.

Del snorted. “I went to Church ever’ Sunday till I was shoulder-high to a man.”

“You? Go to Church?” Chekov tried to return the derisive sound, but only succeeded in making a piggish noise.

Del waved his hand in front of his face. “Shee-it, what you been drinkin’, boy? Your breath knock over a bull Klingon at twenty paces.”

Chekov sat down again. “Why were you named Christmas?” he asked, his brown eyes opening and closing like a curious puppy.

“But why?" the Russian insisted. “I know your birthday. You were born on Halloween…”

“I born one minute after midnight – on All Saints' Day,” the engineer growled. But it was too late. Chekov was already starting to laugh.

“Oh, that explains it! Your mother knew you were the devil and hoped to ward off your evil by giving you the most Christian name she could!”

"And then…” the navigator started laughing even harder. “…then she gave you a second name meaning bearer of Christ to make doubly sure…”

“…and with such a grand last name as ‘the world’…” By this time, Chekov was laughing so hard there were tears rolling down his cheeks, “… that makes you the Christmas bearer of Christ for the entire world!”

DelMonde readied himself to knock the Russian flat on his ass, but before he could draw his fist back, Chekov abruptly fell off the bed, where he lay in a heap, choking on his own convulsive mirth.

“Noel, Noel…” he was mumbling. “Will I ever be able to say your name with a straight face again?”

Del swore, giving the man a sharp kick as he stepped over him to grab the blankets from the navigator’s own bed, dropping them unceremoniously on top of the chuckling lieutenant.

“I hope you drown in your own vomit,” he snarled, though he had never known the Russian to get physically ill, no matter how much he drank. He climbed back into his own bed, putting his pillow over his head to muffle the annoying outbursts of hilarity.

But there was no muting the uncomfortable sting of truth. His mama had told him she’d named him ‘Noel’ to “keep all th’ demons that fly ‘roun’ th’ world on this evil night far away from my honey-lamb.” And whenever the demons would chase him, she’d enfold him in her arms and in her strong mind and sing to him, telling him he was safe because he was her “l’il Christmas.” And every year, on that day, she’d given him a special gift – a day out on the Gulf all by himself with only the shrimp minds, to soothe his weary soul.

And ever since the day she had died, he couldn’t bear for anyone else to call him “Noel.” The fact that Chekov insisted on it was only one of a thousand reasons the Russian got on his last nerve.

He grit his teeth against that sorrow, and determinedly closed his eyes. And much later, in his dreams, his mama held him, and sang to him, and called him her little Christmas.