There was very little to slam or bang in a typical Starship cabin. Despite this, Pavel Chekov was doing a considerable amount of slamming and banging as he entered the quarters he shared with Noel DelMonde.

When Del looked up from the report he was reviewing to glare at his roommate, he found he was already on the receiving end of a glare himself.

“Don' give me that why-you-sleep-wit’-my-girlfriend look,” DelMonde warned. “She not your girlfriend then.”

“Was she ever yours?” the Russian asked acidly. “Did you even care enough to…”

“Now listen,” the engineer interrupted. “I can put this down. We can cut to the chase. I can beat your ass… but that be fifteen minutes o’ good drinkin’ time neither you nor I would ever get back.”

The navigator was still frowning, but said nothing.

“So,” the engineer continued. “You want both of us end up in the sickbay? Or th’ brig? Or you wanna break out that Polish vodka you got stashed inside your closet?”

The Russian released a long breath. “I don’t know why I bother to hide it…”

“'Cause you never learn,” Del answered, helpfully taking two shot glasses out of the compartment near him as Chekov opened the wardrobe and retrieved a bottle.

“That seems true enough,” the Russian said glumly as he filled the glasses.

Although it wasn’t the murderously potent, 150 proof, Polish stuff Del preferred, the vodka Chekov was pouring was a very respectable, non-reconstituted, Russian brand with a forthright, non-bio-engineered kick.

Chekov sighed. “Do I know that?”

“Yeah, I forget,” Del said, raising the little glass to his lips. “You not know. You an idiot.”

“I suppose you are right.” The Russian knocked his shot back like it was water. “If Daphne fails to reconcile with me that would rob her of the pleasure of publicly breaking up with me… yet again.”

“I think the only reason she dates me is because she hates me so very much,” Chekov said, refilling their glasses.

The Cajun shook his head. “No.”

“She date you ‘cause you a surrogate father figure who emotionally available enough t’ bond to but rejectin’ enough to keep it interestin’ for her.”

The Russian was silent for a moment.

“Noel,” he said, at last. “You say the most desperately awful things… for no reason.”

“Sorry.” The engineer sipped on his vodka. “Too much time ‘round psychiatrists at an impressionable age.”

“Or maybe not enough time,” the navigator speculated unkindly.

“I believe I have deduced that.” The Russian tossed back another shot before arguing, “I'm not a father figure.”

“Then I guess you not do t'ings like call her by her full first name 'stead o’ the nickname all her friends do. Or you not call her down an’ scold her when she start t' get out o' hand?” Chekov frowned. “I t’ink her daddy even used t' call her ‘Cupcake,’” DelMonde took another long pull of vodka. “But not in Russian -- So a few points there.” 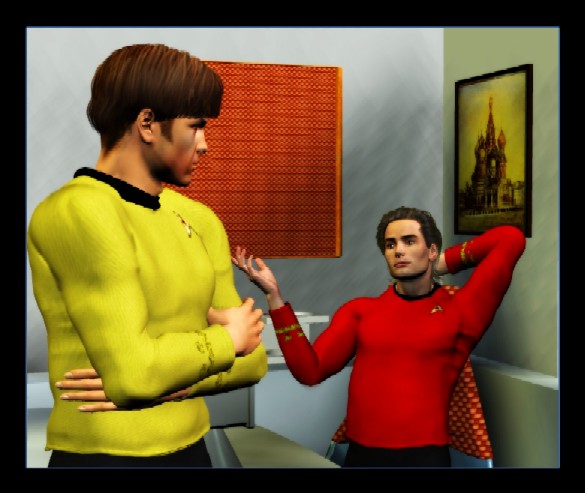 The Russian crossed his arms in a way that purposefully put the bottle out of the Cajun’s reach. “I am trying to recall the portion of this conversation in which I asked for your opinion,” he said frostily.

“Don' get your back fur all up,” the engineer chided. “I actually on your side in this one.”

The engineer held up his fingers and counted off the reasons. “Yeah, Monique Dubois do have tits that are each th’ size of a baby's head. An’ yeah, she do love to put them right in your face in front o' God an’ ever'body. An' yeah, the whole damn time Daffy a’bitching you out, she prob'ly gettin' some hot, nasty, you-my-woman-dammit sex from Ramon... an’ still might be.” The Cajun paused and offered, “I could check on that fo’ ya.”

“We can just assume,” the navigator demurred.

“An' tomorrow, yeah, she probably ask if Daf bitch you out an’ go, "Oh, poor bebe!", throw her arms ‘round you, an' smush them big ol' ta-ta's back in your face again. An' yeah, if Daf don’ happen to be standin’ nearby, she still find out in ‘bout three minutes flat. An' yeah, you be navigatin’ up shit creek wit'out benefit o' paddle… yet again. An' yeah, th' way t’ put a stop to this mess is to get mad at Monique while she doin’ it – ‘stead o’ three hours later – an’ say somet’ing t’ her – ‘stead of come back to th’ cabin t’ pick a fight wit' me. But no, you not gonna do that ‘cause A) you a fuckin' idiot an' B) she got that killer rack an’ a ass so sweet it make a dead man do jumpin’ jacks. So, yeah – paradoxically-- even though you screwed seven ways from Sunday, you not gonna get screwed fo’ at least th’ rest o’ th’ week.”

Chekov poured him another glass of vodka for this painfully accurate if colorfully delivered encapsulation of his current difficulties. “Almost poetic, isn't it?”

“I workin’ it up into a ballad as we speak.” Del took his next shot Russian style.

“If you breathe one word of this…”

“I could talk to her fo’ ya,” the Cajun volunteered generously.

“No.” The Russian had to smile as he shook his head and poured himself another drink. “I do not think that would solve anything.”

“Then why you grinnin’ for?”

“I can imagine what you would say.”

DelMonde narrowed his eyes as he scanned his roommate’s mind. “Damn, son. I sound like Lil' Abner inside your head – ‘Lissen, cher. You gotta watch where you point them there bodacious tits.’ I don' talk like that.”

“Perhaps you don't think you do...” Chekov shrugged. “I suppose if you were to seduce Lieutenant Dubois...”

“Seduce? Who say anyt’ing ‘bout that?”

The Russian cocked a dubious eyebrow at him. “I may not have your extra-sensory perception, Noel, but I think I can safely conclude that you have noticed what you call 'the rack' as well...”

“I not have any thought o’ her,” the Cajun protested, “’cept the respect due any fellow officer.”

“Sweet Mary,” Del swore, shaking his head. “I not t'ink o' more ‘n fourteen or fifteen hundred different ways that hookin’ up wit' that gal could blow up in my face on this ship.”

“One real good thing 'bout Daf -- she no telepath.”

“Well, here we be again.” Del raised his glass to his roommate. “Back to square one.”

The Russian sighed and followed suit. “Damned if we do…”

The officers clinked glasses and downed their vodka.

“Might be th’ circumstances,” DelMonde said, putting his glass down and giving the navigator a speculative look. “An’ might be th’ liquor… But you beginnin’ to look pretty good to me, T-Paul...”

Chekov rolled his eyes, recognizing this exit cue for what it was. “Thank you for the advice, Noel,” he said, putting down the vodka. “You are correct. I should go apologize to Daphne immediately.”

The engineer nodded approvingly as he poured himself another glass. “You might be learnin’ somet’ing after all.”