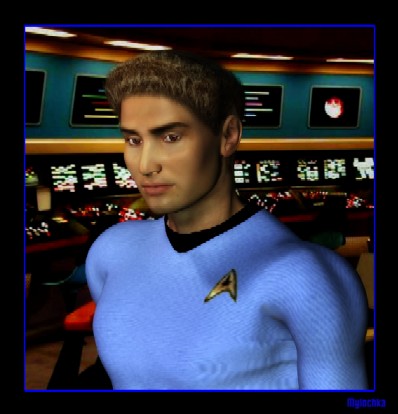 Ramon Ordona was born in Cordoba, Spain, European continent, Terra, Sol-Jupiter system. A quiet, sincere young man, he was raised in a very Catholic family, and embraced the religion fully. He was even an altar boy. He tended the gardens of his parish church, which gave him a strong incentive to study botony. He specialized in the subject at Alterra, but also found a growing interest in the Romance Period of history, particularly with the glamorized sword-and-swashbuckler-type tales. He learned fencing and other types of swordwork, which only fed his noble and romantic soul.

He joined Starfleet as a part of that idealized vision, wanting to Make A Difference, and was thrilled to merit assignment to the Enterprise. It was there that he met the love of his life, Monique DuBois (see Monique DuBois). She was everything he wasn't; flamboyant, flirtatious, scintillating. When she readily responded to his advances, he resolved to make her his wife. Unfortunately, Monique had other ideas. This led to quarrels and break-ups - but Ramon always found a way to win her back, only to start again to try and force his Catholic values on her.

Ramon also became friends with Sulu, with whom he shared the interests of botany, swordplay, history, and romanticism. Sulu taught him not only the finer points of swordsmanship, but to appreciate Monique for who and what she was. They were both young, Sulu often said. There was plenty of time for a more traditional (he carefully avoided using words like staid or sedate or boring) relationship, when Monique was ready. With this advice, Ramon learned to accept Monique for the social butterfly she was, and even to enjoy it. Under Sulu's influence, he also became more personable and more outgoing - which is probably why he and Monique are still together.

Ramon is a botanist in the Sciences Section. His birthday is July 10, which makes him a Cancerian.