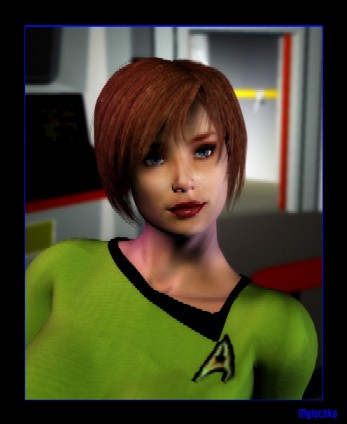 Monique DuBois was born in Marseille in the south of France, European continent, Terra, Sol-Jupiter system. Flirtatious and vivacious almost from birth, she was the youngest of a large family, having two older sisters and three older brothers. With a surprising talent for mathematics, she studied the subject in all its forms, finally becoming interested in the precision of astronavigation. This led her to Starfleet, where, for the last two years of her Academy life, she was roommates with an shy, quiet Indiian, one Jilla Majiir (see Jilla Costain Majiir). They became friends for, though they had little in common besides a love of swimming, Monique was able to enjoy the quiet respite from her hectic social life when with Jilla.

And what a social life it was! It is rumored that Monique never had less than three men vying for her attention at any given time, and she was usually sleeping with all of them - somtimes even all at once.

She and Jilla came aboard the Enterprise at the same time, where Monique immediately began enthralling the male crewmembers. One in particular caught her attention; handsome, emotional Ramon Ordona (see Ramon Ordona). They began what was to become a very tempestuous, though very permanent relationship. Most of the problems were because Monique had no intention of giving up her promiscuous ways, and Ramon - a very Catholic young man - wanted her all to himself. In the end, she didn't become monogamous, and Ramon learned to appreciate her for the captivating social creature she was.

Monique is one of the Enterprise's Navigators. She has a very quick wit, and, like most of the rest of the Enterprise crew, maintains a very protective attitude toward Jilla. Her birthday is May 29, making her a Gemini.