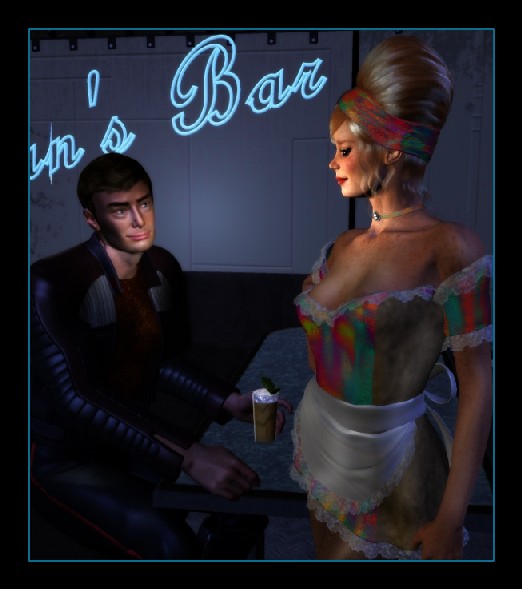 Had it been only four days? It seemed a lifetime ago she had first seen him, spoken with him; here, as now, in the lounge of the shuttle port. He had just arrived then, and was having a quick drink before deciding which of the various entertainment clubs to visit. She was just getting off work, but being a Southerner herself, she’d had to serve the man who ordered a mint julep.

“Atlanta, Georgia,” he’d said when she asked him where he was from. She was from Montgomery, Alabama and said so. He’d done the inevitable what’s-a-nice-Southern-gal-like-you-doin'-in-a-place-like-this routine. She’d done the usual it-pays-the-bills. They’d both laughed at the clichés.

“Is this your first time here?” Another cliché and he smiled a crinkled, beaming grin.

“No, but you can show me around anyway.”

Now, he didn’t smile. His conversation was stilted and stiff. No laughter at the clichés. And why should there be? Wasn’t this whole thing a bad cliché? A sailor on leave picks up some local girl and leaves her with empty promises and a heart just waiting to break. No, that was wrong. Leonard had made no promises. Maybe it was only that she longed to hear them. Or maybe it was he who longed to give them.

He said, “You wouldn’t like it here,
No, it’s no place you should share.
The roof is ripped with hurricanes
And the room is always bare.
I need the wind and I seek the cold.”
He reached past the wine for my hand to hold
And he saw me young
And he saw me old
And he saw me sitting there

“Why do I serve in it,” he finished her question. They were lying in the dark, sated, and she, at least, was content. There was a edge – a wall around Leonard that she noticed never disappeared, not even when making love. “The opportunities for research are unlimited. And I’m practicing more real medicine on the Enterprise that I could in a lifetime somewhere else. And I’m challenged. I have to use every ounce of skill and talent…”

She wouldn’t be put off by his caustic tone. “From what?” She didn’t expect a truthful answer.

He eyed her belligerently. Even in the dark it was obvious. “Is that so?”

“You’re a caring, respectful man, Leonard. What is there that you couldn’t handle about that?”

“Maybe I wasn’t always that way.” The words were rueful, bitter, but used, as though the sour taste was far away yet too clearly, too often recalled.

A repeated, “I can’t believe that.”

He sat up, throwing aside the blankets, getting out of bed. “Maybe you’d better.” 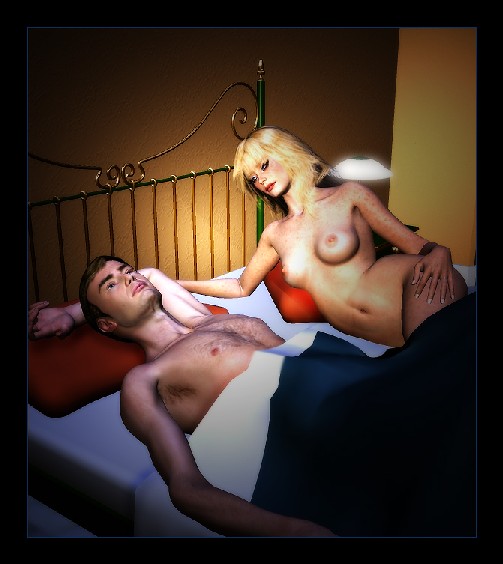 “It was my fault. I never had enough time. Never have enough time. I loved her, in my fashion. I love Joanna. I just can’t seem to give what they need. Certainly not when they needed it.”

“Have I?” he snorted. “Have I really?” I’m still runnin’ my dear. I have three friends on the ship, three out of four hundred and twenty. One I won’t even admit to. One’s more of a drinkin’ buddy than anything else. And the last… hell, even him I’ve jeopardized over medicine. Not his life, but his friendship.”

“You’re too hard on yourself, darlin'. You're the most gentle man I know.”

The discussion ended there. They spend the rest of the time together lightly, with little discussion. Leonard seemed to want it that way. They danced, they ate sumptuous dinners, drank generously, made love long and often. And now they sat nearly silently, waiting for the shuttle to take him back to the life he used as penance. She wanted to ask why, she wanted to convince him he wasn’t the coward he claimed. She wanted to offer… what, she didn’t know. How could she let him leave like this? So cold, so lonely, so far, far away…

Now the trials are trumpet-scored
Oh, will we pass the test?
Or just as one loves more and more
Will one love less and less?
Oh come, let’s run from this ring we’re in
Where the Christians clap and the soldiers grin
Saying “let them lose”
Crying “let them win”
“Oh make them both confess.”