Ensign Ruth Valley draped one golden-tan arm and one long leg across the body of Lieutenant Takeda Sulu, whose bed she was sharing. His arm came around her naked shoulder, his head bending to plant an affectionate kiss on the top of her head. She sighed happily and writhed against him. When he didn’t react, she kissed his warm bronze-colored chest, letting her fingers trail slowly over his neck and throat. His heart rate didn’t increase, nor did his breathing alter in the way it usually did when he was beginning to feel the first stirrings of arousal.

Of course, she reminded herself, he’s almost always aroused, so how, really, would I tell?

The thought made her giggle and she waited for him to ask what was funny. When he didn’t, she frowned and propped her chin on her hand, glancing up at his face. His dark eyes were open but unfocused, as though his thoughts were far away.

“Credit for your thoughts?” she tried again.

Scowling, she pushed hard against his ribcage. “Hello, there’s a naked Antari in your bed!”

He shook himself and grinned ruefully down at her. “Sorry. Was I being inattentive?”

“You were thinking,” she returned, sitting up, pushing her long blonde hair away from her face. “And it better not have been about someone else.”

He colored and sat up himself. “Actually, it was,” he said, clearly chagrinned.

Her purple eyes hardened and she started to get up, and he grasped her wrist.

“No, not like that,” he quickly clarified. “I was thinking – well – about Cajun.”

"You’d better not be thinking about Del ‘like that,’” she threatened. “I mean… ew!”

Sulu gave her a clearly skeptical look. “Does he know you think ‘ew’ when you think of him ‘like that’?” 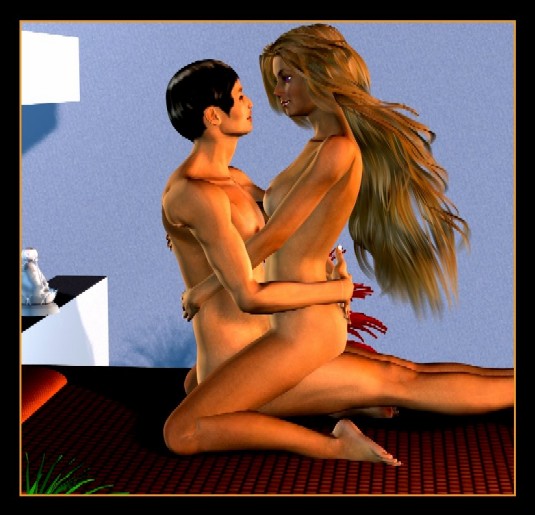 The helmsman chuckled, shaking his head. “You and your prejudices…”

“You and your perversions,” she shot back.

“So what were you thinking about Del?” Ruth asked, settling herself into a cross-legged position.

“I was just wondering – speculating – how he’d react if he knew you and I were…” He let the sentence drop, and Ruth sighed.

“I told you we were never monogamous.”

“But you were serious.”

Ruth smiled gently, taking Sulu’s hand. “He doesn’t have any claim on me, Roy,” she said softly.

“Does he know that?” he asked.

“Because he can get pretty emotional,” Sulu continued. “And possessive about…”

“He gets possessive about his ships and his work – which is understandable because people where he comes from are only too happy to grab all the credit for what he does,” Ruth began, “and his guitar which he certainly should be because it’s as old as mine that those things are rare, and his thoughts and his emotions because he has to work so hard at knowing which ones are his…” Her voice trailed off, her gaze dropping to the bed. “Oh,” she finished.

She took a deep breath. “So you’re worried he’ll get all foul-tempered-son-of-a-bitch on your ass next time he sees you?”

“Actually, I’m worried he’ll get all foul-tempered-hurt-son-of-a-bitch on my ass next time he sees me,” Sulu returned quietly.

Ruth stared at him for a long moment, then smiled again, leaning forward to give him a fond kiss. “That’s what I like best about you, Roy,” she told him. “You’re one of the most caring people I know.”

Sulu made a snorting sound and Ruth stuck out her tongue. “You are,” she insisted, “despite what the Collection might say.”

She batted her eyelashes. “Yes, yes I am,” she replied airily, then laughed at the face he made. She climbed onto his lap, wrapping her legs and arms around him. “Don’t worry about Del,” she said. “He knows how I feel, and I know how he feels. For telepaths and empaths, that’s enough.”

“Maybe I should… or we should…” He exhaled. “I don’t know, write him, let him know before…”

“Before what?” Ruth wanted to know.

“Before ship’s gossip makes its way to the Hood.”

Ruth wrinkled her nose. “Who’d do a thing like that?” Then her expression froze. “Oy god, Pavel! He’d do it just to count coup!”

“Pavel?” Sulu repeated. “He doesn’t have a nasty bone in his body.”

“Oh ew!” Ruth returned. “They were Academy roommates and they hate each other’s guts except when they’re banding together to foil regulation haircuts and/or annoy me and/or when they go out bar-hopping and skirt-chasing together except Del only uses him like a cute puppy to lure innocents into his web of wiles and Pav uses Del’s un-fucking-believable looks to get woman to look twice at him and/or when they’re drinking each other under various pieces of furniture so I spent way more time than any sane person would want to around Pavel Andrevitch and I know what kind of devious mind he’s got especially when it comes to Del or to me for that matter and really especially when it comes to Del AND me …” She took a nearly gasping breath. “I didn’t mean like that!”

Sulu was laughing so hard he nearly lost his grip on Ruth’s waist. ”So we’re back to the ‘like that’ thing again, are we?” he managed. 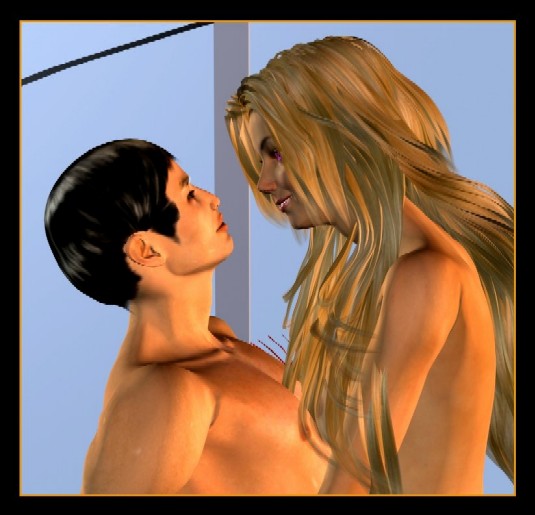 “Not yet,” Ruth replied, having caught her breath and pressing herself against him. “But we could be real soon.”

Sulu kissed her, then murmured against her ear, “We surely could be, honey.”

“And anyway,” Ruth went on, though her words were interspersed with kisses, “speaking of gossip making its way to the Hood, what about Cobra… ew.’”

“You and him, Roy, you and him,” she elaborated. She felt Sulu’s shrug.

“What about me and him?” he asked, nuzzling against her temple.

“Well – he is just the tiniest bit sweet on you – or are you the only person in the galaxy who doesn’t know that?”

His fingers danced along her ribcage down to her hips. “We were never serious,” he answered. His voice was husky and it made her shiver.

“Just because you weren’t…” she tried again.

“He knows what I am, Spike.” His lips trailed kisses down her shoulder.

“And what are you?” she managed.

“At the moment…” he whispered, “so very into you…”

“Not yet,” Ruth breathed, pushing him back onto the bed. “But you could be real soon.”

The sensual smile was evident in his tone. “Now that’s the kind of thing I like to hear.”