A Series of Vignettes
by Mylochka
Make This Fast
(sometime between In the Line of Duty and If I Were...) 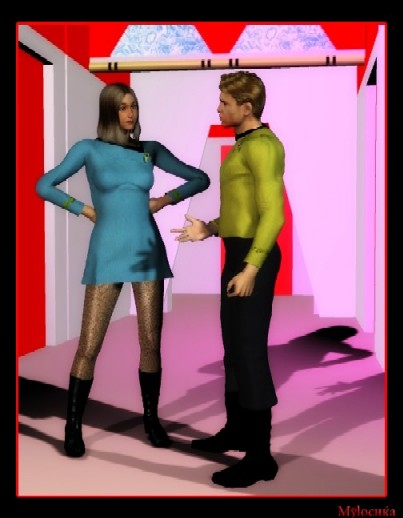 "Oh." Lieutenant Chekov was both pleased and surprised to find his current object de interest standing near the lift apparently waiting for him. "Hello, Miss Gollub."

Daphne did not return his smile. "Hi," she replied checking the corridor as if wary of being observed. "Headed to the Bridge?"

"Like frigging clockwork," she muttered, taking him by the arm. "C'mon. We've got to make this fast."

Puzzled and intrigued by what Lieutenant Gollub might want to do with him in an accelerated manner, Chekov followed her into the lift.

"Well, I..." the navigator stammered.

"No time for coyness," Daphne interrupted, checking the progress of the lift over her shoulder. "Let's just take it as read that mutual admiring eye contact has been made and noted. The problem is that we have friends."

"As in pretty soon now eye contact and come-hither nonverbals are going to lead to you talking to Sulu about me. I talk to Uhura about you. Uhura talks to Sulu... And, well, that would be fine, except for Valley."

"Ruth Valley," Gollub elaborated. "Valley would manage to get into the loop."

"Oh." Although he was still not quite sure what they were talking about, the idea of Ruth Valley being in the loop on anything possibly involving his having consensual sex on a regular basis seemed like a bad thing.

"And over the years, to be honest, I've given her a certain amount of shit over her relationships.... Maybe a lot of shit.... But, the point is that when she gets the first hint that I'm even remotely interested in being interested in..." Gollub drew in a deep breath. "Well, an Antari cargo freighter shipload of shit will be permanently docked outside my cabin. Are you getting the picture here?"

Chekov was getting a picture that had no relationship to anything she'd been saying a half a minute ago. "Have I offended you, Lieutenant Gollub?" he asked after a moment.

"Offended?" Gollub laughed. "Oh, God, no. Mutually admiring eye contact has been made, remember? I'm interested in being interested. We just have to keep this absolutely quiet."

Gollub frowned at him. "No. Not yet."

"Oh..." The clouds finally began to part. "So you are saying that you are interested in me..."

"And we need to avoid attracting Lieutenant Valley's attention."

"Then, yes." The navigator nodded and folded his hands behind his back. "That seems like a reasonable course of action."

"Good... I was obviously pretty certain. But it's nice to hear." Gollub smiled and checked their progress over her shoulder again. "And now you have forty-seven seconds to kiss me before we get to the Bridge."

This seemed like an excellent idea to the navigator.

"Forty-eight seconds and you die," Gollub warned as he put his arms around her.

Their lips met softly and lingered together for a very pleasant moment.

"Forty-four seconds," he whispered in her ear before pulling away.

"Nice," she said, wiping her lipstick off his mouth with her thumb. "Timing may not be everything, but chopped liver it's not."

As he made his way down to the helm, Chekov was careful to avoid casting any incriminating glances towards Lieutenant Gollub as she delivered a report to Mr. Spock. Apparently, though, he forgot to stop smiling.

"And what are you so happy about?" Sulu asked.

"I'm not quite sure," the navigator admitted. "At least not yet."