Return to Part Nine of Hotel California - The I.S.S. Enterprise

Once they realized they’d been in the psychocin theater for nearly five days, Ruth, Jilla, Sulu and Kevin also realized they were half-starved and dying of thirst. Captain Kirk and Commander Spock escorted them to the beam-up point, and all four tensed, bracing themselves for some new fictional drama. They were taken immediately to Sickbay, where McCoy and M’Benga and Chapel fussed over them like lost kittens. Kirk informed them that when they hadn’t returned from their leave, the ship had sent out search parties. The entire province of Darius had been combed twice before anyone thought to check the darkened, apparently unoccupied psychocin theater.

“Unoccupied?” Ruth had put in between bites of rare roast beef. “The place was packed!”

“Yes, Miss Valley,” Spock told her patiently. “But our tricorder scans did not reveal that.”

“Do you mean everyone was stuck in that damned…”

“No. Other patrons apparently came and went, yet our scans consistently showed it empty.”

The Vulcan nodded. “When we finally entered the theater, it was apparent the main program was experiencing serious difficulty. One of its safety protocols was to shield itself from scanning technology so that its matrix could not be compromised in a manner exposing the viewers to unwarranted interference.”

“Sir, why did it go back to the beginning?” Sulu asked, on his third plate of sushi.

“When Jilla was – interfacing with the fae thing, “ Kevin put in, pausing from his stuffed, baked potato, “she said something about the last known good configuration bein’ only about half an hour after we…”

“She said what, when?!” Ruth demanded sharply.

Kevin blinked. “Uh – I think it was when you and Sulu went off to talk to Kang.”

“Oy, you IDIOT!” Ruth shrieked, and everyone in Sickbay winced. “Didn’t we tell you to remember everything she said?!?”

Kevin scowled at her. “We got a little busy after that, what with your mad ‘escape’ attempt and the god-rotting Empire!”

“Kevin Thomas Riley, I am SO going to smack the shit out of you…!”

“Enough!” Kirk shouted. “Have your little spat later. The upshot is, once Spock realized that the program was stuck in a loop, he applied a logical solution, and it worked.”

“If I’d known about it, I could have…” Ruth grumbled.

“Leave it, Spike,” Sulu advised. “We might still need it.” His eyes were worried and next to him, Jilla silvered, her eyes lowering.

“I mean,” Sulu enunciated, “how the hell do we know we’re out of it now? It could be playing on that thing Kevin just remembered to construct another false exit.”

“But Jilla’s not still…” Ruth began.

“Unless that’s part of this drama, too.” 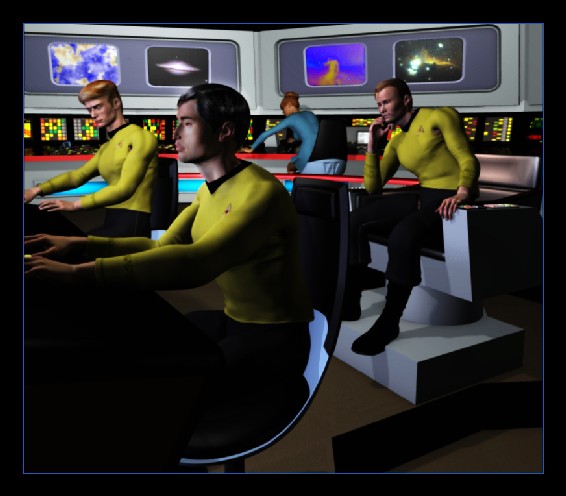 It wasn’t until nearly a week later, when Sulu was at the Helm, Kevin beside him at Navigation, Ruth at Sciences and Jilla at Engineering, the Enterprise on a routine star-charting mission, that they finally became convinced they were really, truly out of the psychocin. Ruth was drumming her fingers on the sensor hood, logging the data of the new area of space. Jilla monitored routine functions. Kevin yawned, stretching in his seat, staring at the ceiling. Sulu checked their heading for about the tenth time in the last half hour, and sighed, rubbing the back of his neck.

“God, I am SO…” he began, then abruptly sat up straight, glancing to Ruth. He found her raising her head from the sensor readings, a half smile on her lips.

Sulu swiveled to face Jilla as Kevin exchanged glances with Ruth. The Indiian blinked, a slow grin coming over the Irishman’s features.

One thing a psychocin never was, was boring.