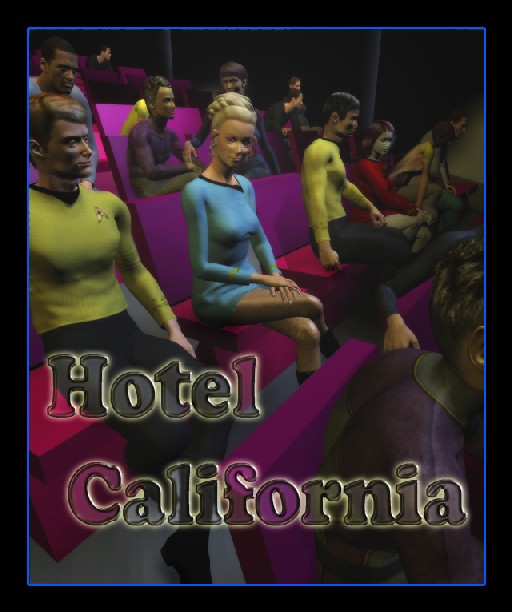 The sidewalk café on Darius VI was old-fashioned enough to be called quaint. Real wood tables with bright yellow linen cloths, spindly, open-work metal chairs with round seats and high, heart-shaped backs, a candle in an old wine bottle in the center of each table, unlit in the bright sun of the early afternoon. A few tables were able to fit under the large awning that stretched out from the café building itself, affording some shade for those lucky enough to occupy them. Ruth Valley, Kevin Riley, Jilla Majiir and Sulu Takeda were not so lucky, but they didn’t mind. After months on a starship, the warmth of a real sun felt good. The Enterprise had put into port a few hours before for a much needed leave. Darius was a colony world with few recreational facilities, but the peace and quiet were a welcome respite – not to mention the obsequious fawning of a colonial population towards the Starfleet personnel who were their lifeline to the rest of the Federation.

The waiter had been one such person, offering the four officers cold iced tea on the house while they made up their minds what to order. He had also presented them with Darius’ modest tourism brochure. It spoke mostly of the relaxing, quiet, calming distractions that could be found on Darius, of its ‘rugged charm’ and ‘leisurely pursuits.’ But there was also one unusual entertainment offered. Sulu’s eyebrows rose in interested surprise, and he pointed it out to his companions. 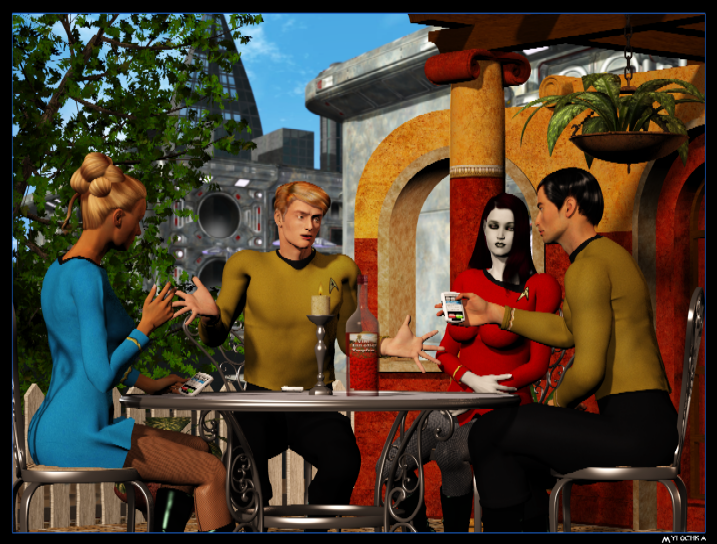 “A psychocin?” Ruth stated dubiously. “I never even went to one of those when I was a civilian.”

“I am aware of psychocin technology as a medical tool,” Jilla put in curiously. “How can such a thing be used an entertainment?”

“Easy,” Kevin responded. “All you have to do is program fictional images and situations, then allow the patrons to join in the action.”

“It’s programmed to be random,” Sulu added. “Each individual input is monitored by the computer and measured against standard variables. The program then chooses an input to display based on the matches to those built in parameters and the number of similar responses.”

“Sounds like you’re more than a little familiar with it, Roy,” Ruth teased. Sulu shrugged.

“I've read about it, that’s all,” he confessed. “I’ve never actually been in one.”

“There are all sorts of pre-sets,” Kevin enthused. “You can experience romance, adventure, action, comedy…” his grin turned wicked. “Even Starfleet.”

“Oh come on, don’t you want to know what the natives think we’re really like?” Kevin asked.

“Natives is what we supposedly refer to civilians as,” Kevin explained. “The psychocins have invented a whole slang for Starfleet, almost another language.”

Sulu laughed. “It must be terrible for kids who go to these things when they get into the Academy and find out that we speak Anglo like everybody else.”

“Why would one who enjoyed such fantasy wish to enter the Academy?” Jilla asked.

Kevin stared at her, his expression openly awed at her naivety. “Never mind, Jilla,” Ruth said.

“I never do,” Jilla murmured, but it was clearly confused.

“We should go,” Kevin insisted. “They’ve got to be more fun than a JTK Film Festival.”

Both Sulu and Ruth groaned at the mention of the Captain’s latest idea to improve morale between leaves: the presentation of cinematic videoplays – his favorites, of course, which tended to be military, westerns, or those involving Terran sea voyages.

“Besides,” Kevin was continuing, “don’t you want to see how we’re idolized by the masses?”

“We are idolized?” Jilla questioned uneasily.

“Sure,” Kevin said. “Folk heroes. Dashing seekers after the unknown and all that.”

“We’re not getting out of this, are we, Riley?” Ruth asked pointedly.

“You’ll enjoy it, darlin’, I swear on my mother’s grave,” Kevin returned in his most persuasive Irish tone.

“If he’s up to his usual tricks, this may just kill her,” Ruth said.

“Please?” Kevin pleaded charmingly. “Give it a try. If you don’t like it, we can always leave.”

Ruth frowned, but glanced at Jilla. Who was glancing at Sulu. Who shrugged. At that moment, the waiter returned to take their orders. “What’s the videoplay at the psychocin?” Kevin asked him.

The theater was circular, an octagon of huge screens surrounded by rows of plush, comfortable seats. At each seat was a headset that enabled the psychocin’s programming matrix access to the viewer’s brainwaves. There was a warning issued with each ticket, that certain races might feel a slight tingling as the program accessed them, but that this was normal, and posed no danger. It gave Ruth and Jilla pause, but since there was no particular mention made of which races this warning applied to, Kevin was able to convince them to participate anyway.

The theater was fairly full, but several of the patrons changed their seating to accommodate the Fleet officers. They were given seats near the middle of one of the eight sections, Kevin on one end, Ruth next to him, Jilla next to her and Sulu at the other end. They donned the headsets, switching on the access ports, watching as the ACTIVE lights came on the control panel on the arm of each chair. Ruth and Jilla both waited for the expected tingling, but felt nothing save the relief when it didn’t manifest.

“Can we hear each other with these things on I guess we can,” Ruth commented when Kevin, Jilla and Sulu turned to her.

“Is it not rude to make conversation during such a presentation?” Jilla asked.

“Naw, the program makes it easy to tune out everything else if you want to,” Kevin assured.

“You know way too much about this shit, Kev,” Sulu told him.

“Congratulations, Kevin, you finally found an area where you’ve got more than Roy,” Ruth said, her voice light but full of insinuation. Sulu snorted. Jilla blushed.

The lights blinked a few times, then slowly went dark. The screen lit up with a flash, a dramatic C chord filling the theater. Brilliant red letters proclaiming CAPTAIN’S LOG: RENTIG VI! faded to a background of stars. A rich, sonorous voice began a familiar monolog: 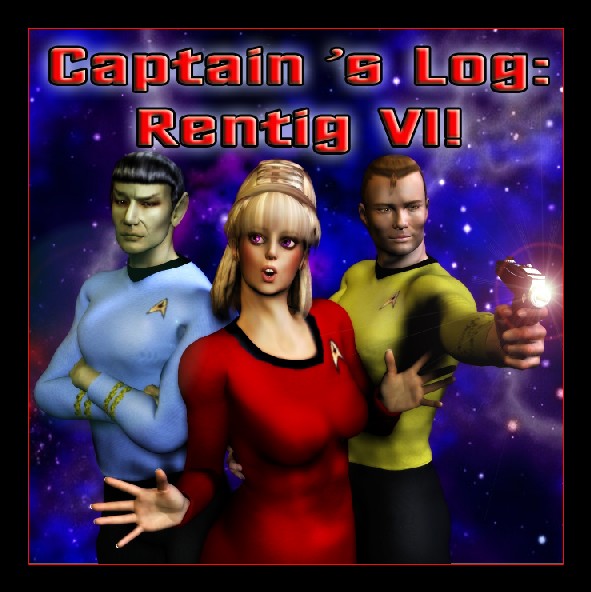 “Captain’s log, stardate 1721.6. The U.S.S. Adventure has been patrolling near the Klingon Neutral Zone for three days, and tensions are running high…..” 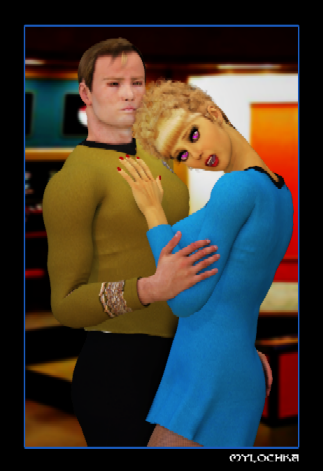 “That’s traditional,” Kevin returned. “All engineers in these things talk like that.”

“If the First Officer’s a Vulcan, I’m leaving,” Ruth announced.

“Shit, the First Officer’s Vulcan! And let go of my arm!"

“Captains do not grab their pretty yeoman’s asses in the middle of a red alert,” Sulu commented sternly

“And since when do all yeomen wear baskets on their heads?” Ruth added. 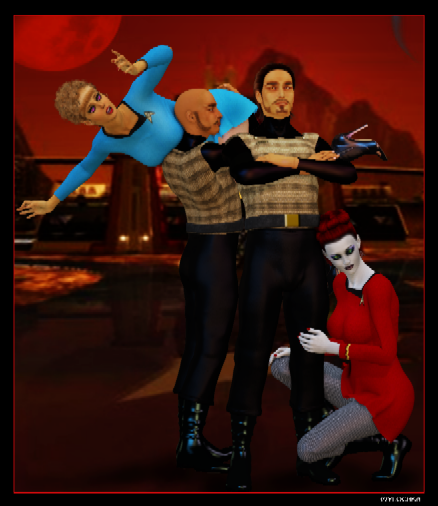 “The Vulcan lowered his eyebrows,” Ruth gasped. “Oh my, are they ever in trouble now.”

“Ruth, is that supposed to be you?” Jilla wondered.

“That’s about the fourth time they’ve broken the Prime Directive in the last hour,” Sulu pointed out.

“Well, when the Klingons are as kinky as these guys…” Ruth let the sentence drop.

“Where’d they get all the handsome Klingons anyway?” Kevin wanted to know.

“That’s about the last thing I thought a phaser could be used for,” Sulu mused.

“And with the blonde,” Kevin added with a smirk. “That’s sick!”

“Speaking of sick,” Ruth said, “If that supercilious green asshole says ‘fascinating’ one more time, I swear I’m going to throw up.” 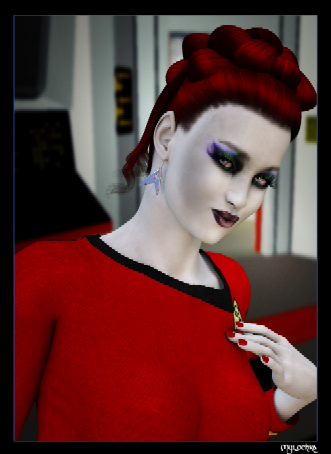 “I was wondering when an Indiian was going to show up,” Sulu muttered as he turned to comfort her.

“They didn’t have to make her a closet nymphomaniac,” Ruth agreed indignantly.

“That’s the blonde’s job,” Kevin grinned. Ruth thwapped him on the arm.

“His accent is harder to understand than Pavel’s,” Sulu noted.

“Why are they doing this to us?” Jilla asked, her voice slightly tremulous.

“Yeah, let them go pick on the Intrepid,” Ruth rejoined. “Oh wait, look at the screen. ‘Next week Captain’s Log: Ship of Vulcan.’ I’ll bet Ambassador Daddy will have something to say about that.”

“Kev, this is supposed to be a parody, isn’t it?” Sulu asked.

“Wait!” Kevin called, “it’s a double feature! The next one isn’t about Fleet! Come on, that first one wasn’t a fair test. How can Starfleet officers properly suspend their disbelief about Starfleet?”

Sulu and Ruth stopped walking and turned to each other. Jilla, who was held to Sulu’s side by his arm around her waist, stopped as well.

“And there really isn’t anything else to do on Darius. Of course,” Sulu grinned wickedly, “Jilla and I could always get a room – a nice bed and breakfast…” Jilla flushed, her head lowering.

“And give Kevin the same idea?” Ruth muttered. “Roy, you’re mean.” She turned back to Kevin. “Okay,” she said, “but this one had better be intentionally funny.”

Go to Part Two of Hotel California - The Queen's Necklace