It wasnĺt a common occurrence, his usual form of recreational inebriation running more toward several pipefuls of Rigellian. But this was not recreational. Rigellian tended to dull pain and soften memory, and the Haven freely admitted what he wanted was to remember and wallow in loss and grief and regret. Terran alcohol was just the ticket.

It shouldnĺt effect me this way, he told himself as he sat in his darkened cabin aboard the HTE Leather. Itĺs been years without a word, a touch. I knew when he simply stopped going into the Hotel that it was most likely overů

But why did that happen,

he interrupted himself. That it was at about the same time the sick-fuck got himself locked up canĺt have been a coincidence. Was it all under coercion after all?

And if thatĺs the case, is it any wonder there hasnĺt been a word or a touch since?

The word was like a splash of icy water, sending truth trickling down his spine. Itĺs all you were, it said cruelly. He was very good at his profession, and it was just good business practice. You may have been hit by a thunderbolt, but thinking it affected him is nothing more than besotted imagination. Heĺs not Haven, heĺs not female, he was a pro. Done and done and done, Dealer. 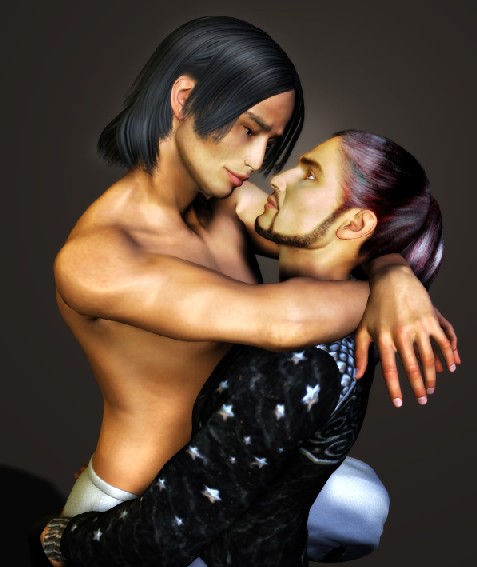 The memory he had been so eager to immerse himself in swallowed him. The first sound of that incredible voice; young, but so rich, like dark velvet. The lean body, smooth, a sun-drenched bronze. Black silky hair that had then reached his shoulders, eyes dark almonds in the high cheek-boned face. And the smile, the incredible innocent sensuality of itů night and sunshine indeed.

More memory tumbled over his aching senses, their first meeting, the skill and passion with which heĺd been served, the beauty and sheer perfection of his partnerĺs every move. He felt again the first kiss, and every thorough embrace afterwards, tasted the honey and salt mingling on their tongues, the teasing mastery so surprising in one so young.

He remembered how his body ached for the boy when he couldnĺt get to Terra, how his mind replayed every detail of the last meeting and planned every desire for the next. He remembered the joyous greetings he was always given, the breathless ardency and delight that carried his lover into his armsů

Lover? Companion, bought and paid for. Of course he acted delighted. Thatĺs what he got the high credit for.

No, I wonĺt accept that. I wonĺt believe it. Trained he might have been, but an opened heart knows whatĺs real. We were lovers, not simply Professional and Client.

Why? Because thatĺs what you want it to have been?

He swallowed, coherency beginning to leave him.

Look at it, Dealer. Even on venus, he didnĺt touch you. He didnĺt even look at you. All he wanted was a way to burn out his own pain ľ and that had nothing whatsoever to do with you. Thereĺs some little Indiian heĺs lost his heart to, and he didnĺt even see you.

And then called you a goddamned bloodsucker. All he wanted was Dealer and Client, not even Pro and Client.

And that shouldĺve been your first clue, yes?

Lane forced himself to take a deep breath. He forced the truth into his mind, almost savagely beating down the arguments that wouldnĺt shut up, blaming them on the damned thunderbolt. He went to the privy, forcibly emptying the damned Terran poison from his system, and vowed to forget the other damned Terran poison that seared his soul.

Still his heart cried out, unable to close despite his best efforts.