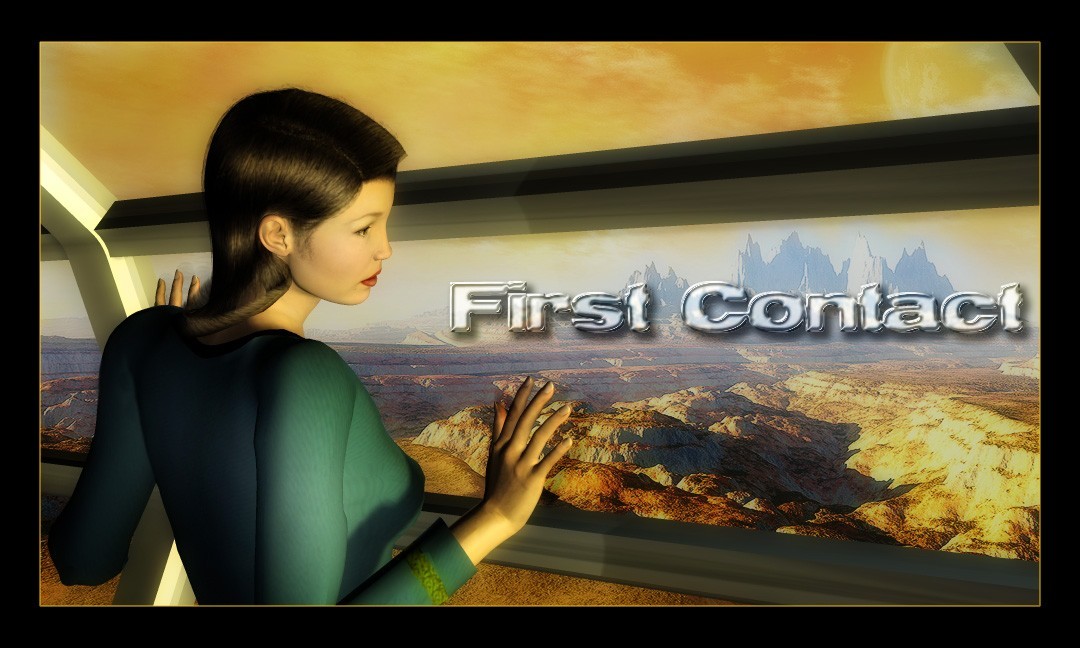 by David and Cheryl Petterson
A Vignette

Dr. Jade Han, xenopsychologist, was the first Terran credentialed in the field to ever be recognized by the Vulcan Science Academy. Hers was the first application for psychological research on Vulcans ever to be approved – and even then, only because Starfleet had pressed the issue. She was, they told Vulcan, making a study of all the founding cultures of the Federation. How could Vulcan, so important in Federation history, refuse? Vulcan, of course, could not.

She stepped off the transport station and was immediately struck by the first of many realizations. The Vulcan climate was harsher than she’d imagined, harsher than Starfleet had warned. The hot, dry air burned her lungs and made her lips feel like sandpaper. Her legs, even strengthened as they were by the rigors of the Starfleet-mandated preparatory program, tired easily from supporting her against the oppressive gravity. The dazzlingly bright red sun hurt her eyes. Feeble sounds echoed faintly in the thin atmosphere. All in all, it seemed uncomfortably like her mother’s tales of Hell – only fitting for a world filled with beings who sported pointy ears and up-swung eyebrows.

She wondered if the lack of oxygen was making her giddy. 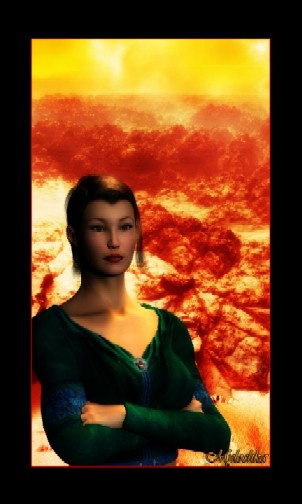 Jade had been met at the Spaceport by a geneticist named Selar. The Vulcan Academy had grudgingly agreed to assign one of their own to be her native guide and primary assistant/subject. Though Vulcans did not have a science of psychology, they recognized that such a science, if it existed, would be tangentially related to medicine, and that Dr. Han was, indeed, a medical physician. This meant that she was what passed in Terrans for a healer, and so was worthy of some respect. Finally, since the alleged ‘science’ of psychology seemed thus somehow related to biology, she had a chance of comprehending some of Selar’s work. Therefore, he seemed a logical candidate for her to study.

Selar was a rational choice for other reasons as well. He was young enough that his mind hadn’t completely calcified into traditional Vulcan pathways, and so he could entertain the interesting notion that ‘psychology,’ were it to exist, could someday prove to be a useful tool. And her research into his background had indicated that he held some radical ideas; radical enough that he probably wouldn’t be embarrassed to be seen in public with a Terran psychologist.

That he might actually enjoy the experience had not occurred to the Vulcan Science Academy.

Or to Jade, either. She expected to have to face the same skepticism from him as she had received from the VSA, in spite of his youth and hinted-at iconoclasm. But when he met her coming off the transport pad, he did not look exasperated at having to deal with a fuzzy pseudo-science and its illogical practitioner, but rather curious and animated and – puzzled.

“The title is unnecessary. Follow me, if you please. Your luggage has preceded you, as has your notoriety.” He turned, heading down the walkway and into the labyrinthine corridors of the Tel-A’len Research Institute.

Selar nodded. “Absolutely, Doctor.” His voice was smooth and quiet and unaccountably deep in the thin air. “No non-Vulcan previously has succeeded in convincing the Vulcan Science Academy to allow a study of Vulcan psychology. That in itself, Doctor, is an impressive achievement.”

“You needn’t use my title either. ‘Jade’ will do.” He gave her a quizzical look, and she frowned. “You seem curious about something,” she ventured.

He raised an eyebrow. “Indeed,” he answered. “I am curious about everything. But at the moment, I am considering my own reactions. Since that is the nature of your field of study, perhaps you would be interested.”

“If you will excuse a highly personal observation, I had expected something very different from you – or, rather, I find that I had formed a mental image of you which does not at all fit the reality, indicating that I had leapt to inappropriate conclusions based on misleading or misinterpreted data.”

Jade suppressed a smile. She was going to enjoy this. “Oh? What had you expected? How am I different?”

“Most noticeably, your skin color is at odds with my expectations. Based on your given name, I had assumed you would appear somewhat more – Vulcan.”

Meaning greenish, Jade translated internally. Jade is green. Of course. But how literal!

“Although,” Selar was continuing, “your skin is certainly as translucent, with the same delicate beauty. And your manner does seem to have both the cool and soft properties of your mineral namesake.”

Interesting associations, Jade mused. Jade is cool and soft and an expression of delicate beauty… She scowled. Had he just commented on the stone, or on her? Was that intended as a compliment? For a human, it might even be considered a flirt. She glanced at him. The lack of oxygen must be affecting her. She thought she’d seen a smile flash across his face.

No, she decided. It must have been no more than a factual description of his associations with the mineral jade. It is not uncommon for one culture to read its own assumptions into the expressions of another. That’s the sort of thing my studies are supposed to reveal, and help avoid. “I’ve… read some of your papers, Selar,” she said, changing the subject. They passed by a large window that displayed a panoramic view of the Tel-A’len basin, and she paused, entranced.

Selar paused as well, noting her reaction. “Fifty thousand years ago,” he began, “there was a small lake here, fed by tiny streams. The lake has long since vanished, but it has left a deep, rounded crater in the rock. The spidery trenches radiating outward are where the streams once were. The presence of fresh water amid the vast desert allowed much diversity of life to bloom here…”

Selar went on, but Jade ceased to hear his words. She was transfixed by the sight of the basin, imagining that brief, beautiful time: lush, luxuriant plants, peculiar fresh-water corals, bright algae, darting fish and the amphibians that preyed on them. It was as a result of that life that the rocks around the basin were streaked with layers of bright colors: reds and yellows, greens and blues, browns and shiny blacks where remnants of ancient life had been.

The Research Institute was situated high on a hill overlooking the Basin. The view was breathtaking. Dozens of generations of Vulcan biologists and paleontologists had lived and worked here, in the planet’s foremost biology laboratory. As far as she knew, Jade was the first Terran to visit this place. She’d been utterly unprepared for the sight.

She stood in wonder and awe at the silent colors, the fantastic spires and knife-edged rills of fossil coral reefs, dark, yawning caverns reaching back into the surrounding rock, here and there an actual bone or perhaps a whole skeleton of some alien, otherworldly creature. In the dry, hot, thin air, there had been almost no weathering, and the utterly clear atmosphere made Jade feel she could almost reach out and touch those fairy-castle spires, seen with such stunning clarity… 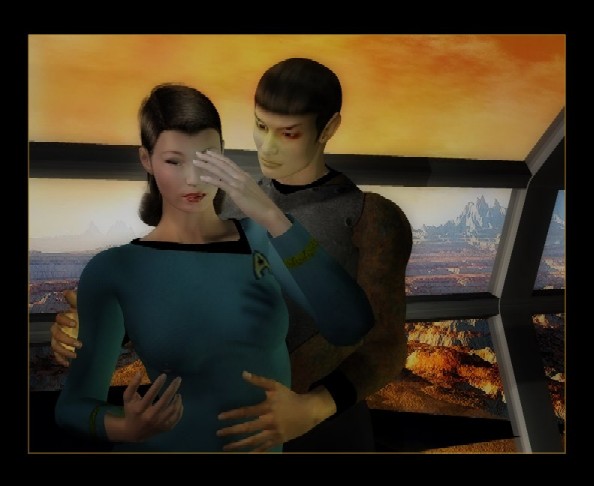 She realized she was standing with her palms pressed to the hot glass, transfixed, openmouthed. Suddenly her legs felt very tired, and her head grew confused and light. Strong, gentle arms came around her and more than half carried her to a bench on the opposite wall.

She knew she was about to faint from the heat, the thin air, the exertion against the greater gravity, the vertigo of standing suspended on the dizzying heights overlooking the Basin. She chided herself at doing such a stereotypically feminine thing. She resolved that she would not under any circumstances allow herself to lose consciousness here, and instead turned her head away from the panorama.

And found herself staring just as fixedly into a pair of dark, cool, sparkling wells. A hint of concern played around the corners of Selar’s eyes. His deep voice told her that she would soon feel better, that Terrans often had difficulty in their first few days on Vulcan, that there was no shame in acknowledging the physical differences between their races, and that he certainly should have anticipated this as a potential problem.

But Jade had again stopped listening, and instead allowed Selar’s voice and eyes to bring her slowly back, concentrating on that sensory impression, not letting her awareness slip away into unconsciousness. And in that moment, she had a flash of insight.

She’d been wrong. She’d had no idea of how to approach the psychology of these people. Everything she thought she’d known about them was wrong.

It was a place of stunning contrasts. The incredibly harsh climate and heart-wrenching beauty was bound to create equally contrasting factions in the psyche: a people accused of being the coldest and most aloof in the galaxy were yet the most humane and gentle, possessed of physical strength that they would be appalled to use, utterly demanding of themselves and utterly accepting of others.

The only way she could possibly understand the Vulcan psyche would be to get inside it, to drop her professional detachment and become one of them, learn their disciplines and their lives and customs – to live as a Vulcan. She could only study them by bringing them into herself.

Whether it was the heat, or the view of Tel-A’len, or Selar’s eyes that taught her this, she could never be certain. But then, the dizziness vanished, though the surety of her new approach remained.

Selar blinked, straightening a bit in evident surprise. “’Thank you’ is, as I understand it, a Terran idiom expressing gratitude. For what are you grateful?”

Jade drew a hand across her face. “For helping me, of course.”

“You were in need,” Selar explained, still puzzled. “I was available. My actions were only logical. One does not thank logic.” At Jade’s obvious confusion, Selar elaborated slightly. “Are you grateful that four squared is sixteen?”

Gratitude, or at least the expression of it, is an important lubricant in Terran social interactions, Jade realized. But even that wasn’t universally true. In cultures where ‘duty’ outweighed the value of one individual life, gratitude was next to unknown. This must also be true, she could now see, where the highest ideal was neither duty nor the individual, but logic. The expression of gratitude was not only unnecessary to a Vulcan, but distasteful, for it implied that he had acted in some way not immediately dictated by the situation – in some way, in other words, which was not logical.

“I think,” she said to Selar, with a smile she knew he would not fathom, “I understand your point.”

Dr. Jade Han’s groundbreaking monograph – Vulcan and Terran Comparative Xenopsychology – became the standard Starfleet reference on the topic for nearly two decades. It was eventually superceded by the second edition, which included Dr. Han’s direct observations of the actual reactions and development of individual Vulcan officers within predominantly Human Starfleet crews. This edition was included as Chapter IV of her Starfleet Standard Handbook of Federation Xenopsychology, which went through four editions and several revisions before Dr. Han retired from Fleet many years later.