"But I haven't done anything!"

"Loki screwed that pooch long before..."

Lane Gage glared daggers at his Chief Medical Officer, Lian Rendell. She was sitting in his chair, behind his desk, looking obscenely pleased with herself.

"What have you heard?" he demanded.

The pretty doctor inspected her short but immaculately manicured fingernails. "Not a thing. I just know how Corporate thinks."

"If this is insider information..."

Lian scowled at her handsome employer. "If it was, I'd wager a fortune. I'm not, so..." She shrugged elegant shoulders.

"Damn." If the threat of Security didn't faze her, Gage knew, she really wasn't dealing from the bottom of the deck. "So what are you basing this hunch on?" he asked.

"I told you. I know the way Corporate thinks," was the blithe response.

A cynical smile began to find its way to Gage's lips. "You're bluffing," he declared.

Lian blinked at him. "Who, me?" she said. "Would I try to bluff a Dealer Extraodinaire?"

"Any day of the week," Lane returned.

The doctor grinned. "Well, okay, there is that. But I'm not. It's gonna be you."

She snorted. "Sure. ' Gee, Omm, I'd love to, but I have more pressing business.' Can I be there when you say THAT to the CEO?"

"Like the Emperor has a brain in his pretty head," Lian scoffed.

It was Lian's turn to scowl. "You know what I meant."

"That the Emperor has Omm Monolem's brain in his pretty head," Gage clarified. "Still, I'll be giving him my polite rejection, not Omm Monolem."

"Because it's gonna be you, Lane."

"Doesn't look like there's any way around it, Boss." Tomor Rand leaned in the doorway, his usual hefty cigar of Rigellian stuck in the corner of his mouth. "It won't be that bad."

"Easy for you to say," Gage growled.

"What's gonna change, really?" The tall, strongly-built Security man pushed his frame away from the wall, stepping into Gage's office. The door hissed closed behind him.

"Let me think," the proprietor of the HTE Leather replied. "No profit, no Clave, no..."

"Why no Clave?" Rand asked.

"Who's gonna tell? Clavists? The crew? You?" Rand removed his cigar, stepping forward to stand in front of his boss's desk. "I don't think the job description's gonna say anything like ' and the holder of said position is not allowed to engage in trading within the boundaries of the Federation.' In fact, if I understand their security protocols - and I do - you'll be encouraged to retain friendly relations with as many factions of Fed society as possible."

"There won't be some kind of scabbing morality clause?"

Rand grinned. "Sure. But such things are always contingent upon reaching a compromise with the morality of the individual member-state."

Gage thought for a minute, then relaxed. "Ah. Yes."

"And what the Feds don't understand..." Rand continued.

"Can't be included in the negotiations," Gage finished. "Tomor, you're a life saver."

Rand gave a small bow, almost clicking his heels. "Glad to be of service, Boss."

After another pause, Gage said, "But about the crew..."

"I'll keep ' em in line for ya," was the large Haven's immediate response.

Rand shrugged. "She is a bit of a loose cannon..." He stopped talking as a sudden gleam came into Gage's eyes.

"I think I just thought of a way to keep Dr. Rendell from being a problem," the Dealer said.

He gave a quick outline of his plan, and when he was finished, Rand was grinning.

"That's why you're the boss, Boss," the Security man said.

"No way in Saford's Hell, Doc," Rand said. He was seated in Leather's Sickbay, his feet up on Lian's desk.

The doctor casually pushed them off.

"He has the most experience with Humans," she retorted. "He already knows a lot of Fleet brass and while they don't exactly trust him, they do know how he operates," she said. "They understand his understanding of done deals. It's gonna be him."

"The Monolem name is too well known. No one trusts them." 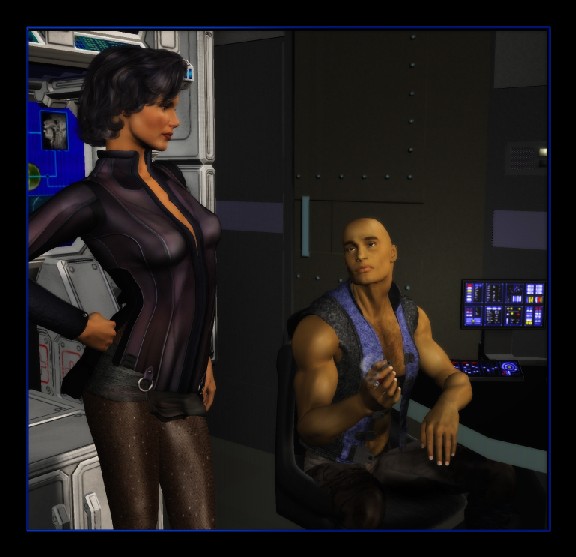 "But Havens do. They wouldn't want that as their representative. Too many give-aways in that market."

"It would make it easier for the Monolems to keep their eye on..."

"Since when do the Monolems ever give up on anything that important?"

"They'll find another way, believe me."

"Maybe," Rand said. "Maybe not. But I still don't think it's gonna be Gage. And even if it is, he'll never accept graciously. They'll have to blackmail the scab out of him."

"What fun," Lian chuckled. "But he won't have a choice. The smart thing to do would be to give in on the main thing and negotiate for wiggle room."

"He's not that smart," Rand muttered.

Lian studied him speculatively. "I thought you had a higher opinion," she commented.

"Not the point," Rand returned. "He likes the sweet gig he's got."

"He could find a way to make the new gig just as sweet."

Rand took a large pull off his cigar, then blew out a smoke ring. "You wanna put your money where your mouth is, Doctor?"

"If Gage goes off into that dark night kicking and screaming, I go with him. If he submits like a good little boy, you do."

"Sure. The Feds will be looking for Havens to join their military. You're a doctor, they'll fast-track you through their Academy. You'd get a job not a lot different than the one you've got here. If Gage goes quietly, you back him up and make the CEO a happy man."

Lian scowled. "Not a fair wager, Tomor. Where Gage goes, you go anyway."

"I can quit any time," Rand rebutted. "The Monolems don't run Security."

Rand shrugged. "Can you see me following Federation rules and regs?"

"You really think he'll fight it?"

"Would I be proposing this if I didn't?"

Lian thought for several minutes, turning the deal around in her head. It seemed straightforward enough. But there was something nagging at her...

Rand rose lazily from his chair. "That's okay, Lian," he said. "It's not gonna be Gage anyway, so it's a non-starter."

"But you're not sure enough to put a stake on it," Rand grinned, and started to turn away.

Gage lifted an elegantly resigned eyebrow at his shaking, fuming medical officer. "There wasn't any point in fighting it, you were right about that," the Dealer replied. "The terms included a clause for cultural exemptions, so there was really nothing to negotiate." He shrugged. "I'll save my battles for when I truly need to win."

"I had a little time to think it over. There is a potential for some really - interesting - side-benefits. For one thing, Rand will have more frequent contact with Beauty, and a happy Security man makes for a happy..."

"He's not going with you," Rendell seethed.

"You're referring to your wager?" Gage interrupted smoothly. "If I've got the details right, Rand said he'd go with me if I created an uproar, and you'd go if I didn't. But I don't think he ever said he wouldn't go if I was a good Corporate citizen." He paused, then smiled endearingly. "Did he?"

Rendell closed her eyes, her lips thinning. "I knew there was something fishy about that bet."

"But you so wanted to be right, you didn't think it through," Gage replied, then made a tsking sound. "Hubris, my dear, plain and simple."

"It wasn't fair," she repeated.

"You're not thinking of welshing, are you?" Tomor Rand said as he entered the office.

Lian's jaw tightened and Rand started laughing. Gage didn't join him, but the way his eyes were twinkling, Lian knew he wanted to.

"I'll get you back for this, Mr. Ambassador," she said.