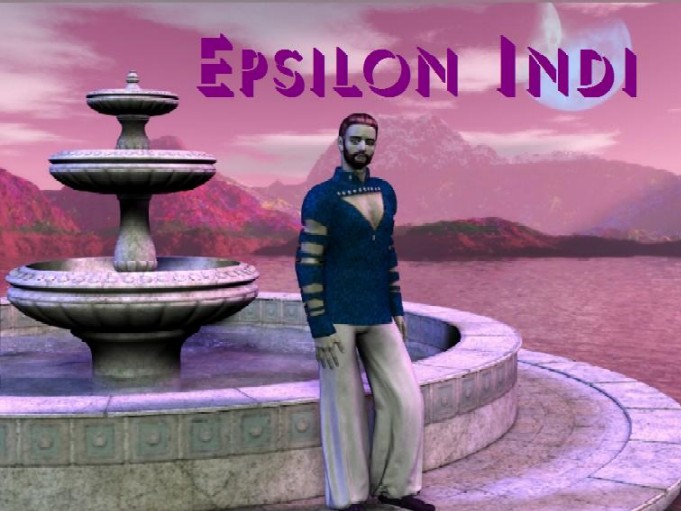 The Star Empire of Epsilon Indi is one of the founding members of the Federation. It is a double-star system, one medium-sized red star and a smaller white one, which are called by the inhabitants, Zindar and Zafaran. The home planet, Indi, is a very warm, wet world with a lavender-colored sky. The lowest recorded temperature is 50 degrees Fahrenheit. It has no major continents, its relatively small land mass consisting of approximately 50 large islands, each approximately half the size of the Terran Australia. Indi has two moons, named Mnori and Mirana, on which is mined the valuable dark metal, mirian. The Indiian system is colonized, with the planet Triacus being home to dangerous, non-corporeal beings. Indi quarantined Triacus after the Federation's run-in with the beings.

The native people of the home planet, Indiians (in-DEE-ans), are dimorphic humanoids, with the males being over six feet tall, and the females generally from 4and a half to 5and a half feet tall. Because their blood is mercury based, Indiian skin is a pale silver, which tends to glow when their blood is heated – either from inner emotions or fever. Indiians are sensitives; they can feel, recognize, and be affected by the emotions of those around them. They call this 'sixth sense' tia (tee-ah). Each race has a definite, identifiable tia, which Indiians are readily able to distinguish. Once an individual person is well known to an Indiian, they can also distinguish that person from any other. 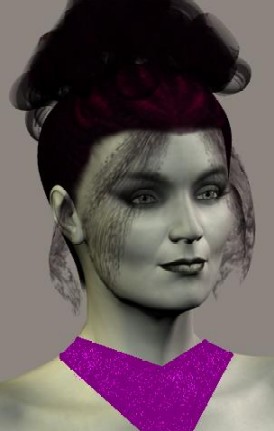 Indi is a religious empire, with the emperor believed to be descended from the First Tear of their Widowed Goddess, Aema (ay-EE-mah) (all Indiians are believed descended from Her tears). The Imperial Line is called Dune (DOO-nay) and all males who are of that bloodline must have names ending with 'e.' When a man ascends the Imperial Throne, his name is altered in pronunciation, with the 'e' becoming a voiced honorific (thus the name Thaere, that of the current Emperor, was pronounced "thayr" before he took the throne, and "THAY'rey" afterwards. Should Ambassador Jole Costain ever rise to the throne, his name "johl' would be pronounced "JOH-lay"). And yes, only males can become Indi's ruler. In Indiian society, the male is dominant in governmental matters as the female is dominate in religious matters.

Indiian architecture runs toward beautiful, precise lines, and most of the buildings are white, with prismatic windows which enable the Indiian flag, which is a rainbow, to be seen everywhere light comes in through them. They like their comfort, so furnishings tend to be well padded and luxuriously upholstered.

There is a major religious schism on Indi, with the much smaller contingent, Roshians (roh-SHY-ahns), following Indi's long-lost God, Aema's husband, Roshi (ROH-shy). As legend has it, Roshi left His wife to wander the stars, and the Roshians claim that, when He returned, He was so altered that Aema did not recognize Him and so rejected Him. Aemans claim this is patent nonsense. How, they say, could Aema not recognize Her husband's tia?; a fact which the Roshians cannot adequately answer.

Indiian marriage, called mnorindar, requires absolute physical fidelity. Not even the death of one partner releases an Indiian from his/her marriage vows. The punishment for infidelity is a literal damnation, which takes the form of a complete shunning and a disconnection from the emotional flow of the planet itself. Unfaithful Indiians usually die within a year of their damnation, unless they are forgiven by their spouse – and even then, they are likely to be shunned by other married Indiians. In a marriage, it is the duty of the wife to adapt herself to the customs of her husband's family where they differ from her own. It is also her responsibility to see that the family's religious devotions and rituals are carried out properly. Both parents are equally responsible for the raising of the children of the family.

Homosexuality is unheard of on Indi. With an average life span of 100 Standard years, most Indiians do not marry until middle age. Which doesn't mean they don't have children before then. There is no stigma to having children outside mnorindar. When a man or women with children does marry, their new spouse, if not the child's biological parent, is referred to by the child as liros (LEER-rohs) (if male) or lirama (leer-AH-mah) (if female). Biological parents are referred to as Ama (AH-mah) (mother) and Rosh (rohsh)(father). Biological children are rosi (ROH-see)(son) and aemi (ah-EH-mee) (daughter). If they are 'adopted' by marriage, they are called lirosi (leer-OH-see) (male) and liremi (leer-EH-mee) (female).

Aeman children are presented to the Goddess in a ceremony called zil-arin (zil-AHR-in) when they are a week old. This is when they receive their name, and when, in Indiian belief, Aema blesses them with Her presence and guidance. At this time, the equivalent of the Terran godparents are chosen, those who pledge to raise the child should anything happen to its mother and father. This is necessary due to an Indiian child's very physical need for the tia of its parents as it grows from infant to toddler. As sensitives, the bond between parent and child cannot be overstated. Those chosen for this honor must then, obviously have their tias recognized by the child; hence the ritual of zil-arin. The terms for these relationships are zilos (ZIL-ohs) (male) and zilama (zil-AH-mah) (female), the child being called by them zilosi (zil-OH-see) (male) and zilemi (zil-EH-mee) (female).

Indiians are well known for being a tolerant people. Though their own beliefs and standards are strong, they do not normally impose them on other races, the only exception being that if an off-worlder accepts Indiian religion, or is wed to an Indiian, the strict Indiian definition of marriage would most definitely apply. Indiians have a strong belief in an afterlife, eternity spent at Aema's Court. Telmnori (tehlm-NOH-ree), those who have broken their marriage vows, spend eternity in a different court, translated from the Indiian as Beggar's Court, condemned to forever stand outside the gates of paradise, begging for Aema's mercy. It is said that should Roshi return, those in Beggar's Court will be forgiven and will be allowed to join their brethren with Aema.