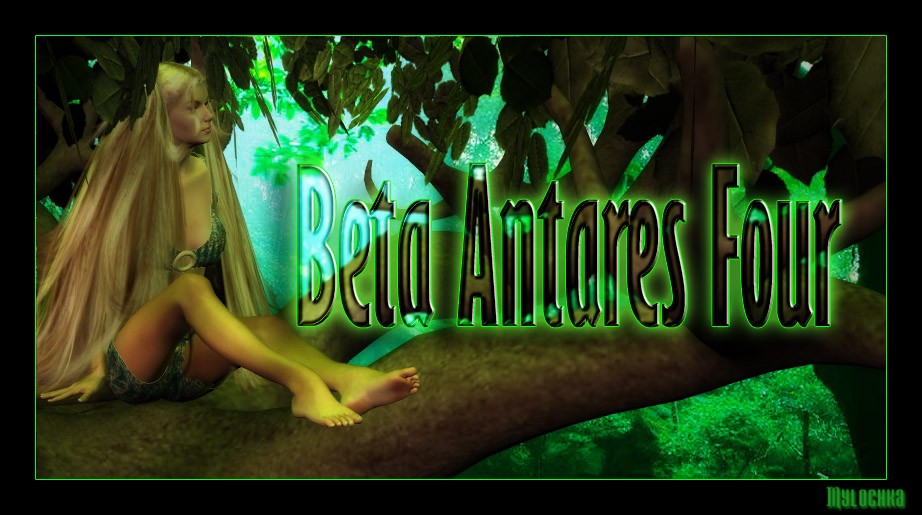 Beta Antares IV is a warm, wet, green, mostly oceanic world. Even the sky is a pale green, rather than the Terran blue. Its land masses are mostly large, jungle-forested islands. Its sun, Beta Antares, is a large red star. The planet also has three moons, Nal, Lin, and Keh. Only the largest, Keh, is inhabitable. 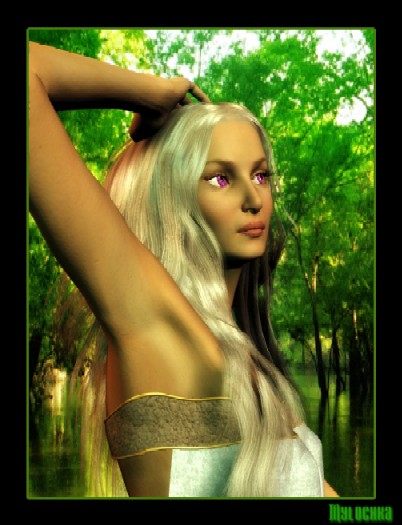 Antares is peopled by non-indigenous humanoids, called Antaris by the Federation. Their name for themselves is Koltiri. They are a race of telepath/empaths, a tall, slender, golden-skinned people. Their hair is also golden and very long. Some consider it an actual secondary life form, in a symbiotic relationship with the Antaris. Antari eyes are very large, a face-dominating feature, a bright, royal purple in color. The size contributes to their very sensitive temples. They never age physically past about 25, and live practically forever. Organized into Clans descended from a group of 13 'mothers,' those in whom the telepathic/empathic gift is particularly strong are trained as Moon Priestesses - empathic healers called keheils (keh-HAIL). Only keheil training and the famous Rhiannol (REE-an-all) Clan produce beings with strong enough shielding to be able to leave the planet and mingle among other races. Little is known about the exact nature of the training, though the Antaris claim that the knowledge necessary to give such training is conveyed to a mother during the process of giving birth. The final test, the sh'nal, requires the candidate to kill a native cat-like creature, called a courgat, and survive the empathic taking of its death without healing the animal itself. So far, no male Antari has been strong enough to survive the training and actually become a keheil.

The planet is a true monothestic matriarchy, governed by a World Goddess, called the Zehara (most Antaris simply refer to Her as "Z"), who is very present and very interactive with Her children. All Antari females are named with the first letter of their Clan, a matronymic, and their mother's name; i.e. Ruth ani Ramy is Rhiannol, Sath ani Shenil is Selnorine (sell-nor-EEN). The 'ani' is a matronymic, 'daughter of.' All Antari males are called "evan (son of) 'mother's name',"such as "Evan Rhialan". Antaris seldom have more than two children, usually decades apart, and never more than one son. Hence, calling a male by his mother's name is as identifying as having a separate first name. Most Antaris do not begin to have children until they are past 100 years in age.

Antari architecture runs toward little more than huts with grassy roofs to keep out the frequent rains. The only substantial buildings are at S'rel Kehara, the training facility for keheils, and S'ren Zehare, the temple/residence of the Zehara herself. These structures are made of stone and are very open, with little in the way of actual doors. Most Antaris, in fact, live in tree houses.

Every keheil is required, at least once in her life, to participate in a planet-wide festival called Trine, an empathic, telepathic, very physical celebration of life. This ritual celebration is held once every twelve years, and guarantees the proper mingling of bloodlines within the Antari people. Trine often results in lots and lots of children. The Antari word for mother is ara. There are two words that denote father; one is used for the biological parent, senda, who may or may not have a hand in raising the child. The other arises from the Antari marriage bond, which is a telepathic and empathic joining so complete that the wife and husband become, for a short time, literally one person. The ritual requires the wife to bring the physical body, mind, and spirit of her husband to her across a distance of about half a mile, joining them together as one being before separating them again. This marriage is called salish, and the child that inevitably arises from such a joining calls his or her father sensalish.

Homosexual contact is VERY taboo among Antaris. No one knows why, and the Antaris aren't talking. Which is typical. Antaris seldom feel the need to explain anything about their culture or customs to off-worlders, so much so that they are content to allow something they use as wood polish, Antari Glow Water, to be used as an expensive aperitif. Of course, if the thick, sweet liquid was actually harmful when ingested, they would feel obligated to point this out.

Despite their arboreal way of life, Antaris are not technologically backward, although some might wonder why, with the power of the keheils, they need technology. The truth is, they like doing things the easy way. Computers are one of Antares' largest, most profitable exports, as is the blue wine they call ycasan, and the beautiful, haunting Cloud Tapestries, woven pieces of art that react empathically to the atmosphere surrounding them. Antaris also make lightweight hang-gliders which are called Butterfly Kites. True Butterfly Kiting is a secret they keep to themselves.

Antaris believe in reincarnation, with a short time in-between lives to be One with Zehara in Her garden, Who evaluates their needs and assigns them rebirth in the Clan She thinks will benefit both them and Antares most. However, if a keheil should ever fail in her duty to Zehara, it is said she will become a sauvrn¸ a small, green, worm-like parasite, forever doomed to work the soil in Zehara's garden.

Fizzbin, despite assertions to the contrary, is not played in, around, or anywhere near Antares – though the game would be right up their alley.